When Phil Colyar realized he had a potential state-record lake trout in his boat, the Wenatchee, WA angler knew exactly... 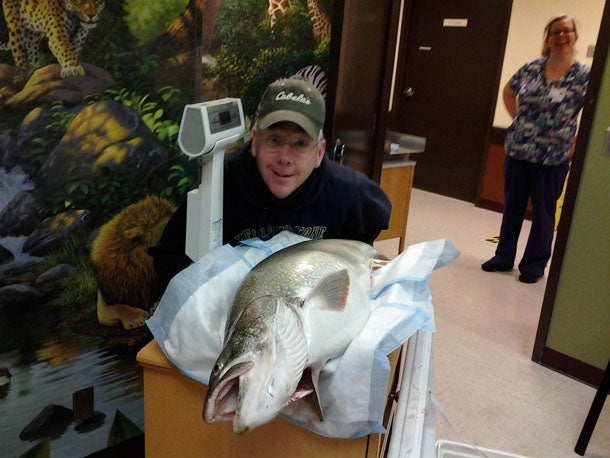 When Phil Colyar realized he had a potential state-record lake trout in his boat, the Wenatchee, WA angler knew exactly where to head: the hospital. Stat!

Deep-trolling a Worden U-20 Flatfish at Lake Chelan on Monday, he hooked the 35-pound Mackinaw in 270 feet of water. “I knew it was bigger than anything I’d caught before,” says Colyar, who boated an 18-pound lake trout in the same waters last spring. “But I had no idea it would be anywhere near a state record until I weighed it on the boat.” At the dock, a guide also weighed the fish and told Colyar it was close to the Washington record of 35 pounds, 7 ounces.

The guide directed him to the nearest certified scale–at Lake Chelan Community Hospital, where local anglers weigh all their contenders–and called ahead to let them know the angler was on his way. “They told me to pull up at the emergency room entrance,” Colyar recalls. “I said, ‘I’ve got a truck and a boat trailer,’ but they said pull up anyway. I could tell they’d done this before. The only thing they didn’t do was ask for my insurance card.”

When the excited fisherman marched through the emergency rooms door with his 35-pound Mackinaw, hospital staff directed him to a scale that’s normally used to weigh newborn babies. A half dozen doctors and nurses gathered around to watch the weigh-in. “One of the nurses is married to a guide who fishes the lake, so she knew the exact weight we were looking for,” Colyar says. The crowd watched the digital readout zoom to 25, 30, 35 pounds. “When it hit 35 it stopped, and my heart just sunk,” he recalls. “I said, ‘Oh, so close.'” Then the readout started to move again. “When it stopped at 35 pounds, 10 ounces, a big cheer went up.”

The celebration–slaps on the back, calls of “congratulations” and “good job”–was not unlike the happy tumult that met the arrival of his sixth grandson three weeks earlier, Colyar notes. With one exception. “I’ve got more pictures of this stupid fish,” he quips, “than of my grandson.”