A diagram of the proposed restrictions for J. Percy Priest dam provided by the Army Corps of Engineers. Click here... 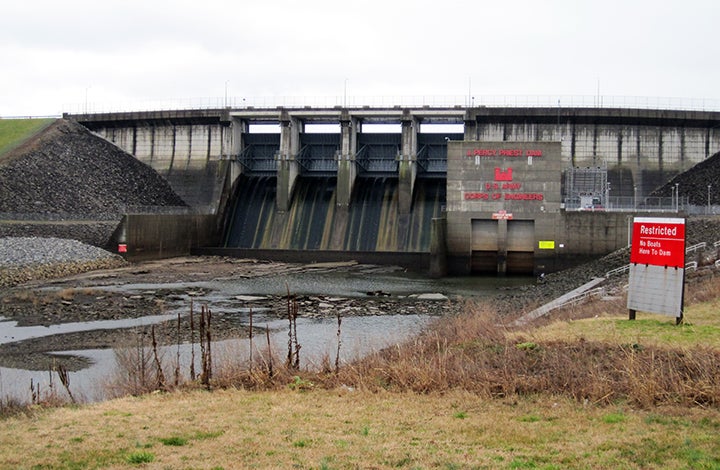 A diagram of the proposed restrictions for J. Percy Priest dam provided by the Army Corps of Engineers. Click here to see similiar images for each dam on the Cumberland River system.

Despite of loud chorus of opposition from politicians, fishermen, fishery officials, civic leaders and business people the U. S. Army Corps of Engineers’ Nashville District is moving forward with a plan to restrict boating access below 10 dams on the Cumberland River system in Tennessee and Kentucky.

Anglers in the two states who fish for largemouth bass, smallmouth bass, white bass, hybrid striped bass, catfish, trout, and nearly any panfish or rough fish you’d care to name will soon find some of their most productive waters off limits if the Corps proceeds with its plan.

Nashville District commander Lt. Col. James DeLapp unveiled the plan in December to near universal disapproval. Citing safety reasons, specifically drowning prevention, and what DeLapp said was “lack of full compliance” with Corps regulation ER 1130-2-520 chapter 10, which has been in place since 1996, he said his office plans to restrict boat access above and below Cheatham, J. Percy Priest, Old Hickory, Cordell Hull, Center Hill and Dale Hollow dams in Tennessee and Barkley, Wolf Creek, Laurel River and Martins Fork dams in Kentucky.

DeLapp said physical barriers will be used to restrict access at some facilities along with the placement of additional signage. He plans to have the new restrictive barriers in place by June at an estimated cost of $2.6 million. The off limits areas will range from 500 to 1,000 feet downstream from the dam at nine of 10 facilities. One of the headwater dams will have a 125-foot tailwater no boat zone.

The Cumberland River rises in Eastern Kentucky thens winds through middle Tennessee before turning north through western Kentucky to its confluence with the Ohio River. The tailwaters directly below the dams provide some of the richest and most productive fishing waters in the river; the Corps plan blocks fishermen from reaching much of these areas.

A sign on the Barkley Dam warning boaters of possible turbulence. Most anglers agree better signage on the dams in the river system is needed.

Fishermen and fishery officials – including Ed Carter, chief of the Tennessee Wildlife Resources Agency (TWRA) and Kentucky Department of Fish and Wildlife Resources (KDFWR) director of fisheries Ron Brooks – along with political leaders at the local, state and national level agree that during periods of high flow tailwaters are dangerous and should be off limits but at other times the waters should remain open. Carter and Brooks said they have repeatedly sought a compromise with the Corps, with whom both agencies usually enjoy a good working relationship.

Over this issue, however, they are at loggerheads.

“Our department works with the Corps on a lot of different things but we have to disagree with them on this,” Brooks said. “We are against it. I think we can make adjustments for what the Corps wants to do and still allow people to fish when conditions are conductive for it.”

If the restrictions are put in place enforcement will apparently fall to the respective state wildlife agencies, a responsibility Carter said, “will not be something the TWRA can enforce.”

The Corps has not been moved.

Capt. Jim Doom, owner of Between the Rivers Guide Service in Grand Rivers, Kentucky, has been a full-time guide for six years and said he fishes about 200 days a year. He does about 75 percent of that fishing in the tailwater areas that would be off limits if the Corps plan proceeds.

“It would be very detrimental to my business. It would shut down the type of fishing [hybrid striped bass] that I do. But not just my business would be hurt, but the motels and restaurants and a lot of businesses that depend on fishermen, fishing, and tourism,” said Doom, adding that, in his opinion, tailwater conditions are dangerous about 20 to 30 days in a bad year. “They say this is about safety. One death is too many. But the Corps has an excellent safety record. In my opinion, safety is not an issue in this matter. There are very few fishermen who try to go [near the dam] when the flood gates are open.”

Doom was primarily concerned with the impacts of the currently proposed plan, but wonders if it will all end there.

“And where is the Corps going to stop? If this is a safety issue, there are far more deaths on the lake than in the tailwater,” Doom said. “If the Corps does this here, in my opinion, they are going to follow suit at other Corps dams. And the TVA (Tennessee Valley Authority/Tennessee River) will follow the Corps on Engineers and do this on their dams.”

Below the J. Percy Priest Dam on the Cumberland River near Nashville, Tennessee during a period of low water release.

A Strict and Unpopular Interpretation of the Law

Chapter 10 of regulation ER 1130-2-520 states that it is Corps policy that restricted areas prohibiting public access shall be established for hazardous waters upstream and downstream from all Corps-owned locks and dams.

Sub section 10-2 (2)c states that the restricted area boundaries shall “ordinarily” be established based on high flow conditions.

DeLapp described regulation ER 1130-2-520 as a “national policy” and said his is the only district office not in full compliance. But the interpretation of the rule apparently varies by district, which seems reasonable because all waterways are different and are managed for specific uses and user groups. DeLapp has said the decision regarding how and where to set restrictive boundaries on the Cumberland system was made at the district office and not handed down to him by superiors.

Since the Nashville District was not altering existing or creating new rules or regulations, a period of public comment was not required. As details about the plan leaked, public outrage spiked, fueled by scant information released by the Corps. The Nashville office responded by holding four informational public meetings to explain how, why, and what it intended to do.

At the initial meeting in January in Grand River, KY, Congressman Ed Whitfield (R-KY) said he disapproved of the plan and would do what he could to stop it. Following several meetings with Corps officials in Nashville and Washington, Whitfield last month filed the Freedom to Fish Act, a House bill that would prohibit the Corps from prohibiting public access downstream for any dam it controls.

“I am fed up with the Corps’ lack of public consideration in their process to prohibit access to tailwaters near dams on the Cumberland River,” Whitfield said as part of the bill’s introduction. “I’m also frustrated that the Corps in numerous meetings at all levels has placated the public rather than attempting to work with us to reach a compromise. This has left me with no other choice than to seek a legislative solution to the Corps’ overreach.”

A call to the Nashville District seeking comment to the federal legislative action poised against it resulted in the following e-mail response:

“The Nashville District continues to be committed to providing for the public safety while coming into compliance with ER 1130-2-520 and statutory requirements of 33 C.F.R. Implementation planning for the restrictions is continuing.

A boater below the Barkley Dam, the largest in the river system. Under the Army Corps of Engineers plan, this water would be off limits to boaters.

During the four, two-hour-long informational public meetings, during which DeLapp explained the Corps’ plan and answered questions, he repeatedly addressed public safety concerns.

“Safety is the Corps’ number one priority,” he said.

While everyone agrees that one death is one too many, the Nashville District has an excellent safety record on tailwaters on the Cumberland system. There have been 14 known drowning deaths since 1970. Nine of those victims were from boating accidents. Five drowning deaths involved people on shore who fell into the water. Under the current plan, bank fishing would be allowed inside the no-boat zone.

Currently tailwater boaters are generally allowed within 150 feet of the dam and/or the lock wall. But when a boat is within the immediate vicinity of the dam–generally from the launch ramp upstream to the structure–everyone on board is required to wear a life jacket. Since 2009 there have been three reported tailwater drownings on the Cumberland system. All three victims were wearing a life jacket.

“The life jackets do not provide protection in these areas and these conditions,” DeLapp said.

During the same time frame the Corps has been involved in at least one drowning related liability claim. DeLapp declined to comment specifically on potential liability issues, but did say, “[Lawsuits] are a growing trend today.”

Paul Rister, KDFWR district fisheries biologist, whose management area includes Barkley Dam, the largest and last dam on the system, says 90 percent of fish are caught within 1,000 feet of the dam.

“If they block all boating access from the dam to the end of the lock wall (about 700 feet) like they’re talking about, then a lot of productive fishing water will be off limits,” Rister said.

For diagrams of the planned boating restrictions for all dams on the Cumberland system in Tennesee and Kentucky, click here.