Last fall, we reported on one of the biggest yellowfin tuna ever caught–a 427 lb. fish big enough to land... 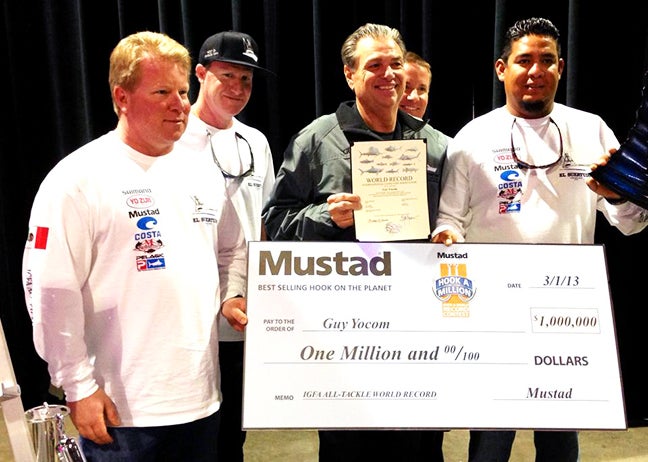 Last fall, we reported on one of the biggest yellowfin tuna ever caught–a 427 lb. fish big enough to land angler Guy Yocom’s name in the IGFA record books. Recently, the fish Yocom hauled in on September 18 off the shore of Cabo San Lucas also put his name in the “pay to” column on a $1 million check from Mustad for using one of their hooks to catch it.

Yocom’s catch was accepted by the IGFA just before Christmas, 2012 as the new all-tackle and Men’s 60 kg/13 lb. line class world record yellowfin. On March 7, he and his crew received his signed IGFA certificate, verifying his record, and immediately after was present with the big check from Mustad.

The story actually began almost a year ago when, with the encouragement of Captain Greg DiStefano of the El Suertudo, Yocom decided to enter Mustad’s “Hook A Million” contest, in which the company offered a cash prize to anyone who broke a world record in one of 10 fresh and saltwater fish categories, using a Mustad hook.

“We wanted to come up with a promotion that would either get more people on the water, or just add a new level of excitement to the every-day fishing trip. So we created ‘Hook A Million’ and settled on 10 different species spread over the continent that would drum up excitement in all 50 states,” says Jeff Pierce, Mustad’s U.S. sales coordinator. “Only IGFA-recognized world record entries qualified and the contest ran from October 2011, to the last day of September, 2012, so Guy’s fish just made it in before the deadline.”

The crew of El Suertudo knew how strict IGFA guidelines governing record catches are–much more so than regulations governing many state records. So DiStefano and Yocom concentrated on their prep work, including respooling all the reels with new line preemptively tested by the IGFA to make sure it fell within the organization’s guidelines. They even made everyone aboard the boat register with the Mustad competition in advance of the outing–a regulation in the contest–on the off chance anyone reeled in a winner.

With resumes that include a few hefty 300+ lb. tuna, DiStefano, Yocom, and their crew journeyed 200 miles off the Cabo San Lucas coast on Yocom’s 61-foot boat with one goal in mind–to catch a record-sized fish–and just when the men nearly gave up hope, the big one took the bait. You can read all about the fight and see photos from the catch in our story about this world record yellowfin here.

In early December 2012, after a thorough review of Yocom’s application, line samples, and other criteria the IGFA uses to measure the validity of record-book entries, the agency announced Yocom’s catch would eclipse the all-tackle record for tuna set by Mike Livingston’s 405 lb. fish caught in 2010.

“For us, the IGFA record felt like a shoe in. We spent so much time prepping and learning the rules before we actually went fishing that when the IGFA finally said everything checks out, we felt more relief than anything else,” DiStefano says.

Naturally, since Yocom caught the record on a Mustad hook–a 12/0 Mustad #33950BLN–many anglers assumed the fish was the front-runner for Mustad’s $1 million prize.

“We found out we got the IGFA record just before Christmas, and then after the New Year, Mustad contacted Guy and let him know he won the $1 million grand prize, but they wanted to keep it under wraps so they could make a public presentation,” DiStefano says.

On March 7, at a special ceremony at the Fred Hall Long Beach show in southern California, Yocom, surrounded by Capt. DiStefano and the rest of the El Suertudo crew, representatives of the IGFA presented him with a signed certificate, recognizing his catch as a world record.

Shortly after, Jeff Pierce presented him with a “Happy Gilmore” sized check spelling out the $1 million prize–though Mustad will actually disperse the money to Yocom in $20,000 increments over the next 50 years. In case you’re wondering, the prize is transferable, so Yocom can bequeath it to his kin, or take it to an agency that specializes in structured settlements and get a portion of the lump sum.

“We’ve all made some great professional relationships because of this. It’s all been a really positive experience,” DiStefano. “Shimano, Pelagic, Costa Del Mar, and of course, Mustad, have really been good to us over the years, so to have something like this all come together is amazing. We’re going to keep fishing like we’ve been fishing–you never know when another opportunity is going to come your way. We haven’t figured out some super-secret nobody else has–it’s just fishing.”

As a side note, another tuna landed in 2012–a 445 lb. tuna caught by John Petruescu–had the mass to beat Yocom’s catch, but wasn’t submitted for world-record consideration because more than two anglers needed to handle the rod during the retrieval. However, many still recognize it as the largest yellowfin caught on rod-and-reel.