Robert and Stefanie Stanley of Olathe, Kansas, managed a twofer that not many couples can claim: Both caught state-record blue... 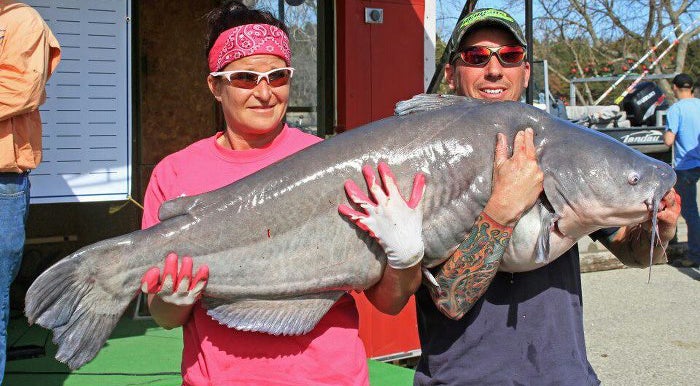 Robert and Stefanie Stanley of Olathe, Kansas, managed a twofer that not many couples can claim: Both caught state-record blue catfish.

Stefanie and Robert with her tournament-winning Kansas lake-record blue catfish in April.

Robert caught his blue, a 102.8 pounder, August 11, 2012, on the Kansas side of the Missouri River. Stefanie reeled in her record–an 82.05 pounder thought to be the largest blue catfish ever taken from a Kansas lake–April 6 during a fishing tournament at Milford Reservoir.

His catfish was the stuff of dreams–literally. Fishing at 2 a.m., Robert dozed off while waiting for a bite. “My buddy gave me a smack and said, ‘Hey, you got a hit,'” Robert recalls. “About that time the rod bends double and the drag starts screaming. I was wide awake then.”

Robert Stanley with his 102-pound state-record blue catfish in August, 2012.

Hers was a white-knuckle ride, thanks to windy conditions that churned up whitecaps at the 16,000-acre reservoir near Junction City. “I have a fear of water, especially at Milford,” Stefanie says. “When the wind starts blowing there it’s like being in the ocean. I grew up on the water, watching my dad fish, but after seeing what he was pulling out of there, I didn’t really want to go in it myself.”

Despite the chop, Stefanie stuck with it. Robert figured they needed at least 150 pounds on their five-fish stringer to take first place. After a couple hours on the water they had five catfish in the live well, but none surpassed 18 pounds. He decided to move, and within a few minutes had marked what he thought were some decent-sized catfish on his finder. Fifteen minutes later Stefanie hooked up.

“When it first bit, I didn’t think it was huge. It nibbled here, nibbled there. I thought, ‘Well, another 10 to 15 pounder. It fought more than average, but we didn’t really know what we had until it got to the surface and we started freaking out. We thought we had big-fish for sure.”

Stefanie and Robert ready her 82-pounder for the tournament weigh-in.

They had the prize for biggest fish of the tournament nailed (by nearly 40 pounds, it would turn out), but they still had work to do before they could claim first place for the heaviest five-fish turn in. With the weigh-in deadline looming, Robert decided to make one last move before starting the long ride back.

They pulled anchor and 15 minutes later were set up on a screenful of big fish. “We fished for a half hour with nothing, but I felt she had a big fish for the tournament so I was excited for her,” Robert says. “We were down to our last 30 minutes when I caught a 40-pound blue, and we headed back to the ramp.”

By the time they got in line, the Stanleys were the next-to-last boat to weigh. They pulled out the smallest fish first, then Robert’s 40-pounder. “Then that big fish started fighting both of us as we pulled it out, and the crowd went crazy,” Stefanie says.

“Everyone was watching by then, and they were super-excited,” Robert adds. “She was so excited she was shaking.”

The couple captured the overall tournament prize with 155 pounds, beating the second-place team by a mere two pounds. And Stefanie earned the big fish award and the distinction of catching the largest blue catfish from a lake on record in the Kansas Department of Wildlife and Parks master angler database. Though it’s not an official record category, the sense of accomplishment is real.

“There’s a lot of excitement and achievement,” Stefanie says. “We’re new to the tournament scene, and we’ve had to prove ourselves. I’ve set out in the rain and lighting and waves with the boys, and I think I’ve proven it’s not just a man’s sport.”

In fact, their daughter, BayLeigh, boated a 69.9 pounder while fishing with her father last year. Their son, Tyler, also enjoys chasing catfish with his dad. Robert likes to target the biggest catfish he can find, but when fishing with his family he’s careful to focus on quantity in addition to quality. “We just have fun hanging out in the boat, and I concentrate on making sure I put them on plenty of fish. They like action,” he says.

Even Stefanie digs it–wind, waves and fear of water be damned. “It’s enjoyable fishing,” she says. “Once the panic attack is over I’m fine.”