Unlike human eyes, which require a black light to see the ultraviolet reflectivity of Jimi Hendrix posters and lava lamps,... 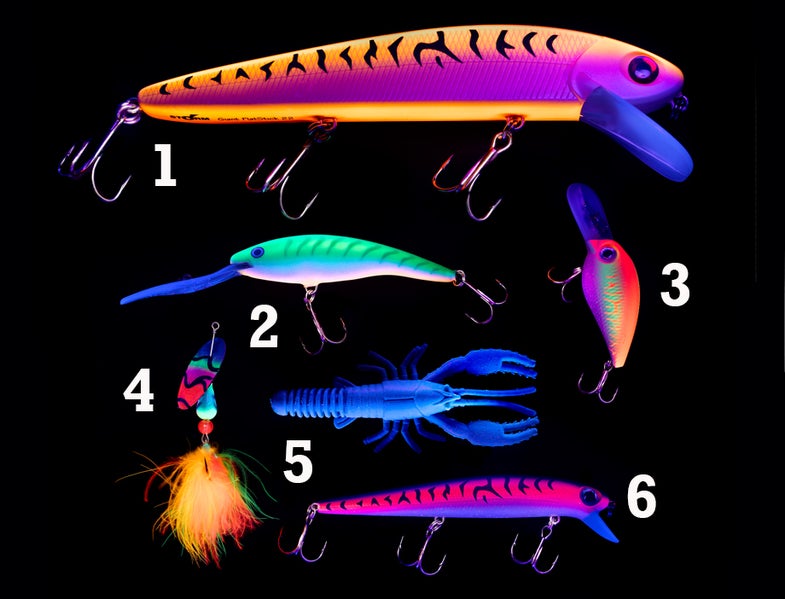 According to Zack Jud, a fisheries biologist at Florida International University, there are two reasons why fish have developed the ability to see reflected UV light. First, perceiving UV-reflective patterns on fish skin helps them recognize a mate or an enemy. The other reason is because food sources such as transparent plankton are much easier to pick out when they’re reflecting UV light.

Lure makers in the Northwest trout and salmon market started using this knowledge to their advantage decades ago, creating baits that featured UV-reflective finishes that caught noticeably more fish. So if the concept has been around for some time, why have more such lures begun popping up on shelves only in the last few years? It’s a combination of new technology and angler desire for the next big thing.

Soft Lighting
If there’s one lure brand that’s representative of the movement, it’s Brett Ware’s Tightlines UV, which sponsors big-name bass pros like Brent Chapman (who fishes Ware’s soft plastics and earned the Bassmaster Angler of the Year title in 2012). Unlike most lure makers that simply add on some bright UV-reflective paint, Ware infuses a small amount of UV color into the plastic he uses for his baits, which include everything from grubs to craws to creatures. According to Ware, the formula was perfected after three years of testing and research he conducted himself, filtering different frequencies of light in tanks and studying how light penetrates the water at various depths.

“Everything from worms to crayfish to shad reflects UV,” says Ware. “When I first started testing the UV-reflectiveness of soft plastics, I found that every single brand I tried absorbed UV light. Only those with flake gave off a little bit of reflection.”

Ware also claims that UV light penetrates murky water, just as it does clouds. While his baits may not look any different in your hand, Ware says, the UV reflective properties make them more visible at any depth or in any water condition than similar baits without UV enhancement.

“Fish rarely bite what they can’t see,” he says. “If you fish our lures, you’ll notice you won’t get the same tap, tap like you do with other plastics. These lures get crushed.”

Hard Thinking
Cecil Hoge, president of Panther Martin, believes that earlier attempts to push UV lures were fainthearted. That’s why, when Panther entered the UV game in 2012, it took a different approach.

“Before, you could find a few spinners with UV-​reflective dots on the blade,” Hoge explains. “We didn’t want our patterns to be subtle. We made the colors more brash and violent, with lots of dark black and blue lines that create a more dramatic visual effect.”

While Hoge assumed these new patterns would be most popular in the trout and salmon world, response to the lures in social media outlets surprised him.

“People post a lot of pictures to the Panther Martin Facebook page,” Hoge says. “Quite a few of those photos this year have been of largemouth and smallmouth bass that were caught on the UV lures. We know for a fact that our sales are up because of the UV line. We know they’re catching fish, but we don’t know what the long-term effects will be on the fishing market.”

Rapala representative and UV lure specialist Carmen MacDonald says the trend is moving into walleye and muskie circles, hence the addition of UV-finish hard baits, ranging in size from 21⁄2 inches to 81⁄2 inches, to the Rapala and Storm brands.

“Predators can use UV light to gain a feeding advantage, especially in low-light situations,” says MacDonald. “But even though we know UV lures can help you catch more fish, I don’t think anglers should be using them all the time. At noon on a summer day in clear water, it can actually be too much of a good thing.”

I fished both UV hard baits and soft plastics earlier this summer on a smallmouth trip. During the afternoon, I switched back and forth between a Tightlines crawfish and my favorite brown tube jig. They both caught bass, but I didn’t see a noticeable difference in how fast or hard the UV lure was hit, and they both landed roughly the same number of fish.

Just before dark, however, I had a flurry of action on a UV-coated Rapala stickbait, casting against a bank lined with overhanging trees. Maybe the fish were just hungry, or maybe the darker shadow line created by the branches created a perfect ambush point, and any lure would have gotten smashed. Or maybe they truly could see the lure better.

Without a season’s worth of testing, it’s hard to say, but that handful of aggressive hits earned that stickbait a permanent spot in my smallmouth box.

From the September 2013 issue of Field & Stream magazine.