The International Game Fish Association (IGFA) received record catches from all over the world this month–Australia, Canada, Ecuador, Japan, and... 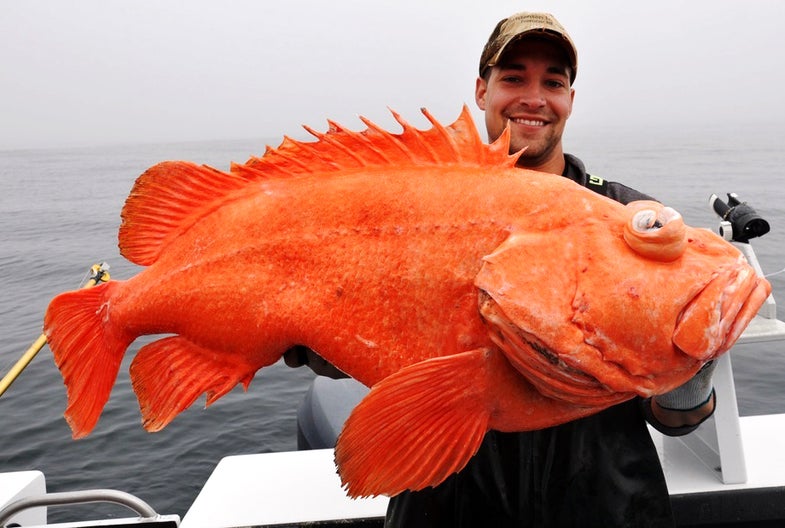 The International Game Fish Association (IGFA) received record catches from all over the world this month–Australia, Canada, Ecuador, Japan, and even the Netherlands–not to mention Alaska, Hawaii, and New York. More than half the applications were for fish that were caught and released. **** _
_

Julia Grace Ketner of Westhampton, NY was fishing upstate on Lake Chautauqua with Todd E. Young on July 1 when she landed this smallfry record. Casting a Wiley lure, it took her five minutes to boat the 19-pound, 13-ounce muskie. She released the fish after snapping some photos. The current IGFA record is 12 pounds, 4 ounces (5.55 kg).

This 23-pound (10.43 kg) golden trevally (Gnathanodon speciosus) fell to Italian fly angler Paolo Pacchiarini’s white clouser fly on April 18 in Australia. Pacchiarini traveled from his home in Milan for some downunder fishing action with guide Brett Wolf out of Exmouth, and he got what he was looking for. After fighting the fish for 20-minutes and snapping some photos , Pacchiarini released his catch. The current IGFA record is 18 pounds (8.16 kg).

Young Axel Bowmer traveled to the Portugeses island of Madeira for its famed offshore fishing. On July 8 he landed this 194-pound, 11-ounce Atlantic bigeye tuna on a Cherry Jet after 35 minutes in the fighting chair. The current IGFA record is 187 pounds (84.82 kg).

While fly fishing with a local guide off the coast of Punta Las Arenas, Mexico, Maragaret hooked this 60-pound roosterfish with a custom “raton” fly. After a four-hour fight, the fish bottomed out a 60lb. Boga-Grip scale. Instead of getting its actual weight, which would have required killing the fish, Shaughnessy decided to release it. The current record stands at 29 pounds (13.15 kg).

Angler Junichi Inada caught this 38.18-inch (97 cm) grass carp on the Senba River in his native Japan on June 11 with a piece a bread for bait. After an eight-minute fight, he documented the catch and released the fish. The current record is 36.2 inches (92 cm).

Dutch angler P.C. Ouwendijk caught this 26.77-inch (68 cm) zander (Sander lucioperca) out of Holland Diep on April 6 using a soft plastic shad lure. After a quick fight, the angler measured and photographed the fish before releasing it. The current record stands at 25.59 inches (65 cm).

Colorado native James Schmid was targeting large rainbow trout on Lake Diefenbaker with renowned angler and guide Adam Konrad in Canada on May 24. Instead, he caught and released this nice 27.16-inch (69 cm) walleye, qualifying him for the length record. The current all-tackle length record is 24.4 inches (62 cm).

It took Ricardo Sola Tanca 10 minutes to haul in this 40.55-inch (103 cm) Pacific snook (Centropomus spa.) from his home waters in Qyayaquil, Ecuador on July 22, casting a jig tipped with shrimp. Tanca will top himself, since he also holds the current record for this species at 34.25 inches (87 cm).

Jamie Hamamoto is the first on the books for the species with her 10-pound, 4-ounce roundjaw bonefish (Albula glossodonta). She was surf fishing with her dad, soaking a piece of scad off Kahuka when her rod doubled over and the reel started screaming. After 10 minutes, she landed this nice fish which also qualifies her for the 10lb. Bonefish Club.

Cindy Mitchell hooked this 25-pound, 8 ounce (11.34 kg) yellowfin tuna on June 28 while fishing Bermuda’s Argus Bank. After it devoured a gummy minnow fly she was casting, Mitchell fought the tuna for an hour on a 12lb. tippet. The current record is 25 pounds, 4 ounces (11.45 kg).

Photos courtesy of the IGFA.