Photo by Barry and Cathy Beck As a teenager, my box of go-to winter trout flies consisted of exactly two... 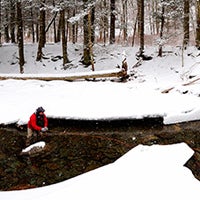 Photo by Barry and Cathy Beck

As a teenager, my box of go-to winter trout flies consisted of exactly two patterns: pink San Juan worms and orange salmon eggs. I was caught up in the misconception—as are many anglers, I think—that when the water’s freezing cold, there are no bugs hatching, so I’d better drift something colorful that will look to a sluggish trout like an easy-to-get, protein-rich meal. I realized I was wrong one sunny afternoon in January as I sat on the bank of New Jersey’s Pequest River, where thousands of tiny black stoneflies were crawling on the snow. I wasn’t carrying a nymph box, but I managed to dig an ant pattern out of the bottom of my pack. I sunk it, swung it downstream to a riffle, and tied into a small rainbow trout within five sweeps of the run.

I decided then that black might be the new Day-Glo pink. Now, I never hit a stream after November without carrying some black stone nymphs in sizes 18 and 20, which have scored me some nice trout on days when my fly line practically froze in midcast.

Snow Bugs
“Stoneflies in the Capniidae family only hatch in the winter, even on the coldest days,” says Robert Younghanz, a Colorado trout fishing guide and aquatic entomologist who gives streamside classes to fishermen (the-bug-guy.com). “They’re jet black to help them absorb heat from the sun, and they don’t fly. They mate right on the snow. It’s the only significant insect fauna in winter, and you can find them in rivers from coast to coast.”

While these little stones can hatch on any river on any given day, even large hatches will not trigger frenzies among trout in cold water with already slowed metabolisms. Given that the stones are a natural winter food source that fish across the country universally recognize, however, trout may be quicker to eat them than a worm or egg. If you’re going to try to take advantage of this winter hatch, you do need to keep an eye on the weather forecast.

“These stoneflies will mate on a cloudy day when the air temperature is in the teens,” Younghanz says. “But big hatches will happen during ideal conditions. Bright sunny days are best, and if they coincide with a window where the temperature climbs into the 30s or 40s, all the better.”

F&S editor-at-large and FlyTalk blogger Kirk Deeter points out that many of his fellow diehard Western winter trout bums tend to overlook these bugs in favor of tiny midges, and that’s a mistake. “I think the little black stonefly is effective because it’s a contrast bug,” says Deeter. “In winter, when light is less direct and intense, I believe fish key on shapes and profiles as much as anything, and a dark, distinctive bug like a stonefly is going to get noticed. And at that time of year, when a trout’s metabolism is slowed, they aren’t going to chase some big chunky insect. That’s probably why the little black stonefly is so deadly.”

Though your gut may tell you to fish a stonefly with split shot under an indicator, as you would in spring, I’ve found that subtler presentations often fool more trout in winter. Look for shallow riffles that transition into deeper, slower tailouts and drift a stone on a light tippet, using only the weight of the beadhead to gain depth. Winter stones are tiny, and therefore more susceptible to being carried quickly by the current. Trout willing to feed at all this time of year will move around in the water column a bit to snatch a meal.

And if you have trouble letting go of your eggs and worms, you can have the best of both worlds with some tweaks at the vise. I started tying pink beadheads on my stones instead of gold or black, and replacing the traditional black split tail with iridescent orange marabou. You get some wiggle and a little bit of bacon-and-eggs color, but you’re still matching the natural forage.

Winter in the Buff
If you haven’t bumped into an angler or guide wearing a Buff, you’re not on the water enough. These lightweight bandanna–facemask–neck gaiters are designed to do everything from keeping bugs out of your mouth to the sun off your ears. But up until now, they’ve been summer accessories. The new Cyclone Buff ($39–$40; buffusa.com) features a Gore Windstopper fleece lower to keep your neck toasty, and a slightly thicker microfiber upper than that of a traditional Buff. You’ll appreciate the protection on those frigid days when the sun is glaring off the walleye ice or the bankside snow of a steelhead river.