Behind the Scenes: Fishing with a ‘Wicked Tuna’ Crew

Photo courtesy of The National Geographic Channel. The third season of Wicked Tuna premiers on Sunday night. The top-rated show... 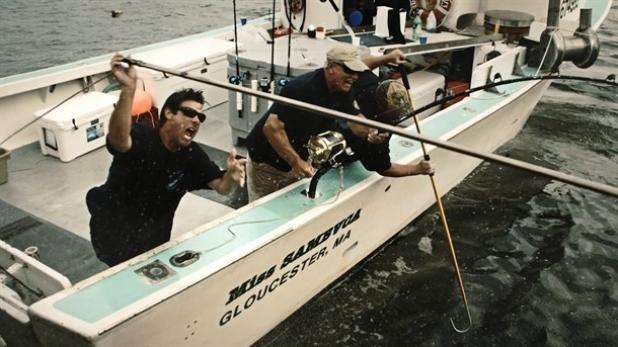 The third season of Wicked Tuna premiers on Sunday night. The top-rated show on the National Geographic Channel puts cameras on board five competing bluefin boats to document the lives and work of their crews. These guys are commercial anglers, but they use rods and reels to catch their fish, live-lining baits on single hooks and fighting giants into harpoon range. This kind of fishing is a lot more fun to watch than hauling nets, but the show’s reality format makes you wonder how authentic the men really are.

Late last September I had the chance to find out. National Geographic invited Field & Stream out for a day on one of the Wicked Tuna boats, the Miss Sambvca, captained by Paul Hebert. Brash, quick to laugh, with a New England accent as wide as Cape Cod bay, Hebert served as first mate on another of the show’s boats, the FV-Tuna.Com, but was fired toward the end of last season. Now he’s at the helm of his own boat and you can tell he’s looking for revenge.

I meet Paul at the docks early on a Saturday morning. It’s low tide and he calls up for our gear from the deck. The Miss Sambvca has a four-man crew; Paul is captain, Paul’s older brother, Bruce, is first mate, and Robbie “Junior” Dunne is the deckhand. The fourth man is Matt Getz, an embedded cameraman who spends roughly 80 days on board during the season to capture all the action.

Paul and Bruce are two of six brothers, the third generation of their family to work the trade. Paul, the youngest, has been a professional mate all his life. Bruce, the oldest, hadn’t fished for tuna commercially in years, running charters for stripers instead, but he came out of retirement last year to help his brother take over a boat for the show.

We hang out on the deck behind the pilothouse as the Miss Sambvca growls out of the harbor and into a 3-foot sea. Junior’s at the helm as the brothers rig up. Paul crimps 260-pound-test Seaguar shock leaders onto swivels, coloring each silver crimp black with a sharpie. Bruce hooks the leaders against the stern and leans his weight into them, stretching the fluorocarbon to make sure they fall straight in the water.

“Paul is a lot more meticulous than other fishermen,” says Bruce. “There’s little things that Paul and I and Junior do, that other people don’t do, that improves your presentation to the fish. We’ll outfish a lot of people because we do them.”

Photo courtesy of The National Geographic Channel. Junior at the helm of the Miss Sambvca.

I ask him about the difference between a professional and an amateur out here. “It’s all about experience,” he says. “We don’t have to question what we do because we take the time to perfect what we do. A lot of the other people don’t. They crimp it together, they reel it on the rod, and they don’t even look at it. They think they’re fishing tommy cods in the local pond. These are giants! You have one hitch in your gear, it will fail.”

Such failure is expensive. A true giant can net a boat $20,000, and the name of the game is to catch as many as you can until the quota for your method fills up. The government sets these quotas by weight, allotting metric tons of tuna for the long liners, tons for the purse seiners, tons for the harpooners, tons for the recreational anglers, and tons for the way we’re fishing. Each fish kept gets registered at the docks and its weight is added to the total. When a quota is reached, that season shuts down.

A few hours later we drop anchor at the head of a rip and let out road until we’re swinging over 230 feet of water. It’s a new moon and the tide is moving. Paul and Bruce hand out bait rods rigged with sabiki rigs that we jig just off the bottom for whiting, hake, haddock, and mackerel. Tuna candy.

The Wicked Tuna guys are all based out of Gloucester, the nation’s oldest seaport, about an hour northeast of Boston. “Gloucester’s like the perfect hub,” says Bruce. “Stellwagon Bank. Tilly’s Bank. Jeffery’s Ledge. We’re 3-5 miles closer to all of them than any other port in the area.” He stabs a whiting with a bodkin, popping its swim bladder, then drops it in the live well.

The structure of these banks attracts the bait, and the bait brings in the tuna, particularly during this time of year. Today, though, is not our day. High pressure, wind against tide, and a lack of good reports means the men are mostly going through the motions. Junior confirms this while we’re chatting in the pilothouse. “Right now Maine’s the only place they’re catching them good,” he says. “Normally there’s fish all over, but they’re still up north for some reason.”

We mark one fish early, then it’s quiet, and as the day wears on the wind picks up and the seas begin to build. By early afternoon we’re taking 7-foot rollers under our beam. Shaped like a squat, 43-foot duck, the Miss Sambvca rides these waves with equanimity. But the ride gets rougher as we start to motor back.

One of the best things about shows like Wicked Tuna is how well they capture the power of the elements. But while crashing waves and heaving decks look great on TV, they’re a lot less fun in the real world. Flying spray and a cold wind keep us all crammed into the pilothouse the whole way home, fighting off nausea from the cigarette smoke.

In the lee of the harbor we head back out on deck, grateful for the fresh air. As we motor toward the quays Paul catches sight of his old boss’s boat, the FV-TUNA.COM, a beautiful 2003 Duffy, 38 feet long and painted black. A Nat. Geo crew is shooting her glamour shots in the late, low-angle sun. Paul glowers, then talks about how he’s dying for his own vessel. The Miss Sambvca is Paul’s ride for this season, but she doesn’t belong to him. He’s operating her for a captain’s share of the take, and she’s older, heavier, and slower than he’d like. “Next year I’m buying a boat,” he says. “I’ve been fishing this way for 40 years, since I was 8 years old, but I haven’t been able to afford one yet.”

A vintage shot of Paul Hebert.

Back at the dock he pulls out a scrapbook full of old photos. Yellowed shots show a kid hand-lining giants in a 19-foot skiff. A newspaper clipping tells the story of a huge mako, the largest, it says, ever landed with a rod and reel. “That’s me, right there,” he points out the muscled young man at the head of the hanging shark. I ask him if his name was ever in the books for the fish. “Nah.” He shrugs. “I was the mate.”