Photo by Tom Martineau If you tie your own trout flies, the operation probably goes something like this: Whip up... 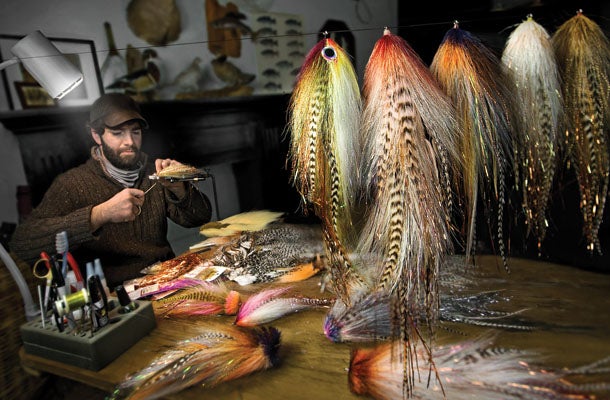 If you tie your own trout flies, the operation probably goes something like this: Whip up a dozen bugs the night before a trip, lose half the next day, repeat. If you’re part of the cult of flyfishermen who chase muskies, however, tying a single fly is a labor of love, and for many, the result is as special to its creator as the goliath muskie that’s supposed to eat it.

Some of these fishermen routinely fool–or at least get follows from–what is arguably the pickiest predator that swims, so it’s fair to say that more thought, trial, error, and devotion go into tying flies for muskies than for any other fish. Understanding the qualities that make these muskie flies productive can help you tie more effective streamers for any species.

Minnesotan Gabe Schubert landed his first muskie on the fly in 1994 at age 14 while casting for smallmouth bass. It was an incidental catch but provided the motivation for Schubert to begin creating bigger flies and start targeting “big toothies,” as he calls them. His personal-best muskie now measures 49 inches, and his flies–massive concoctions of bucktail, saddle feathers, and Flashabou–are so beautifully crafted, they were featured in a Stillwater, Minn., art show in 2013. While flattered, Schubert purposely priced the flies insanely high so no one would buy them. These are, after all, his babies.

“You get attached to certain flies. They have sentimental value,” he says. “I’ll spend hours scheming out a design. With some of my 16-inch doubles, I’ll tie in one section, then keep holding up different colors of bucktail to figure out what I like. Sometimes I’ll need to think on it, so one fly could take days.”

Although Schubert may be uncertain about color schemes when he initially sits down at the vise to begin a new fly, he is sure of how the fly needs to behave. A long tail acts as a stabilizing rudder, and a big round head of spun deer hair causes the fly to jackknife on the pause, giving following muskies a nice side-profile view. If he wants a fly to glide and walk smoothly, so he can fish it like a jerkbait, he’ll skip the bun head and taper the nose down to a point. “First and foremost, the action needs to pique the fish’s curiosity,” says Schubert. “Then the fly just needs to be big enough to encourage a muskie to actually go after it.”

The major difference between Schubert and Steven Wascher, a former guide on New York’s Lake Chautauqua, is that Wascher has fully embraced synthetic materials, which allow him to tie flies faster and more affordably. That does not mean, however, that his patterns are any less effective. His signature tie, the Esoxulator, has hooked about 50 muskies for himself and clients since its invention in 2004. With a huge head made of stacked Fuzzy Fiber, a jointed body, and an overall length of nearly 15 inches, the Esoxulator pushes a tremendous amount of water and displays a full 3D profile from any angle–two features both Wascher and Schubert believe are key to a productive streamer.

“I want the fly to do all the work, not the rod,” says Wascher, who has been addicted to the sport ever since a muskie followed his fly the very first time he tried flyfishing for the species, 16 years ago. “I don’t want to have to use my wrist to make a fly dance. On a straight retrieve, the Esoxulator has great tail action and the large head creates great pulsation in the body. It seems to get the attention of neutral fish.”

Spending hours or days at the vise and using an entire bucktail to create one fly may seem extreme, but it’s the type of dedication that’s necessary to catch muskies on a 10- or 12-weight rod in the first place. Schubert finds far more reward in fooling one muskie with a streamer than 10 with conventional gear, and that reward is amplified by the work that goes into his patterns. “Sometimes you pull a fly out of the vise and you just know it’s a winner,” Schubert says. “It’s a good feeling.”
_
You can sit in on one of Schubert’s tying seminars at Bob Mitchell’s Fly Shop (bob​mitchells​fly​shop.com) in Lake Elmo, Minn. See the website for dates. Otherwise, all the fly-shop staffers tie muskie patterns and can answer any questions about materials or rigging up._