How to Catch Monster Channel Catfish

Photo by Bill Lindner I was bank-fishing the upper stretches of a Tennessee River tributary and could hear the fight:... 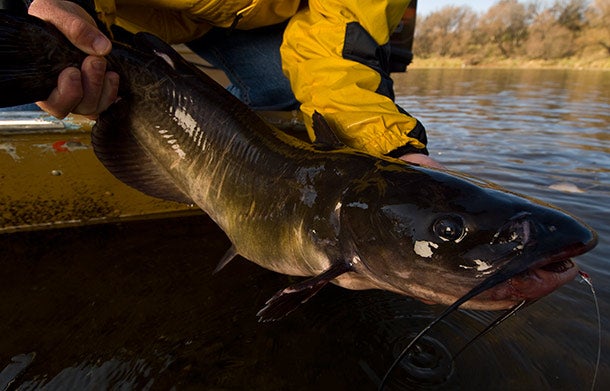 I was bank-fishing the upper stretches of a Tennessee River tributary and could hear the fight: The sounds of a strained Zebco 33 in the hands of a 12-year-old battling a catfish a third his size aren’t subtle. The kid bear-hugged the thing all the way up the mud bank to land it. No more than an hour later, I reeled one up that was even bigger, and it was heavier than any cat I’d ever caught in a farm pond. Since then, I’ve never underestimated small moving waters for big channel cats.

Cats on a Limb
Small tributary streams can offer amazing catfishing, and limb lines are my favorite method of targeting them. But big catfish are notorious for twisting off of standard limb lines since they roll after being hooked, and that twists the lines until they tighten enough to pop the hook free. To thwart the twist, add a big barrel swivel on the line about a foot above the hook, and secure an egg sinker to the line between two overhand knots above the swivel. I like my bait–a small, lively bluegill hooked under the dorsal fin on a 5/0 Kahle hook–set about 2 feet deep. To find your lines in the dark, use mailbox reflectors, which have a flat side to write down your name, address, and phone number (mandatory information wherever limb lines are legal), a reflective side, and holes on both ends that are just about the diameter of trotline cord.

Cut Corners
Spring rains and high, swift, muddy water make life difficult for sight-feeding species. But catfish love it, and it creates an ideal situation for bank fishermen. I like to set up on the inside of a sharp, deep stream bend, casting my rig toward the undercut created on the outside of the bend (below). This situation can call for long casts, and the current can be stout. Because of that, you need tackle that can both cast a heavy egg sinker and fight a double-digit catfish. I spool a flipping outfit with 50-pound, bright yellow braided line and rig up a basic slip-sinker bait rig with a barrel swivel and 1-foot monofilament leader in the 17- to 20-pound-test range. Tie a 3/0 circle hook to the leader, add a generous gob of fresh shad guts, get your rig on the bottom, and set up for a big-cat victory.–W.B.

A) Set up on an inside bend, use a sturdy holder so a big catfish pull the rod out of your hands.
B) When a fish strikes, give it time to pull most of the slack from the line.
C) Simply allow the road to laod once the slack is gone. Your catfish will be on the other end.

Local Hookup
“We used to wade little creeks with cane poles when I was a kid, and now and then, you’d hook a channel cat that would try to pull you straight to the bottom. After finally landing a few of them, I’d spend all of my time in the dark holes of the creek, trying to catch the next one.” –Phil King, catfish guide, Corinth, Miss.

Trophy-Water Identifiers
1. Tributaries: Farm ponds hold plenty of channel cats, but they rarely grow huge. Big rivers can be intimidating places, but their innumerable tributaries are easier to approach, easier to fish, and often more productive in spring as the water warms faster.

2. Shad and Herring: Channel cats are predators. Like all other predatory fish, they thrive–and get biggest–in areas with abundant large forage. Shad are tough to beat, but skipjack herring run a close second.

3. Nasty Cover: Big catfish love gnarly logjams, undercut banks, rock piles, and deadfalls. They not only ambush prey in such areas but also use the holes and pockets within the tangles for spawning and building nests.