How to Catch Monster Pike from Small Waters

Those little local waters packed with hammer-handle pike probably have some trophy fish too. Here's how to catch them 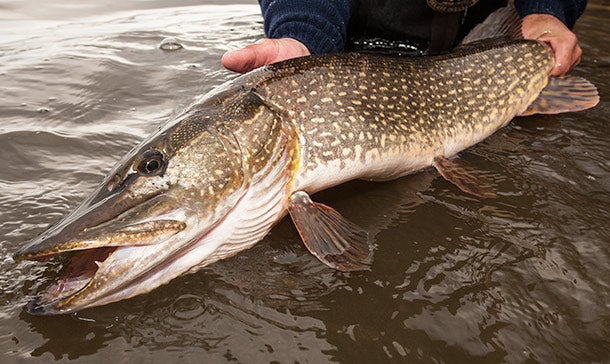 Like me, you may have a handful of local waters known for pumping out small hammer-handle pike, but quite often there is a trophy fish swimming among the smaller specimens. You just have to be willing to sacrifice lots of hits to connect with any gators swimming in your favorite fishing hole. But seeing a 40-plus-inch northern pike shaking its head at the end of my line makes it all worthwhile.

How do you know if your local spot holds big pike? Well, the best way to find out is to catch one. But lacking that, here are three things to look for to tip you off that your river, pond, and hidden lake holds some real trophies.

In rivers and streams, a healthy population of suckers, white perch, or carp will keep northerns well fed and growing. In lakes and ponds, good numbers of panfish, herring, shad, or ciscoes provide the necessary calories that yield larger fish. Pike will eat almost anything, including birds and rodents, but a few stray ducklings and mice each season aren’t enough to boost pike from hammer-handle to goliath status.

Northern pike are ambush predators that almost always relate to structure, with tall, thick weeds being their preferred hangout. Large weedbeds in the 5- to 10-foot depth range with defined edges are prime habitat, as they allow fish to sit on the weedline and catch prey moving in and out of the bed.

Smaller fish may be plentiful in shallow weedbeds during the warm months, but pike are technically a coldwater species. Waters with trophy fish usually have areas at least 15 feet deep where the big girls can find cooler temperatures during the summer heat.

The Best Lures for Catching Big Pike from Small Waters

Small stickbaits and spinners catch loads of northerns, but not usually many worthy of a replica mount. My go-to lures for big pike are those plucked from my muskie arsenal. In spring, when vegetation hasn’t yet reached the surface, running a 9-inch black Shumway Flasher bucktail-type lure over the weed tops and across the weedline will turn the heads of the biggest pike in the bed. Black is a favorite because it contrasts well in both stained and clear water. If your home lake isn’t very weedy, tossing the same bucktail around brushpiles and blowdowns will draw out any fish. Start with a slow-rolling retrieve in early spring. Strikes are often subtler when the water’s cold, so if there is ever any doubt about whether you got hit, set the hook.

As spring turns to summer and the salad grows thicker, a 9-inch black-and-red Lindy M&G spinnerbait, or similar musky spinnerbait, really shines. The single hooks hang up much less than the treble of a bucktail, and the big arm will push weeds and brush out of the way. Work it over the tops of weeds, in pockets, and around the weedline. Very the speed. Aggressive summer pike will often smash a fast-moving spinnerbait, but there are days, especially around cold fronts, when slow-rolling this lure a little deeper is the ticket.

Local spots that hold big pike tend not to be the best-kept secrets, but the strategy of tracking the daily and monthly moon phases to get a leg up on the competition is not widespread among casual pike fishermen. Pay close attention to new moons, full moons, and when the moon rises and sets, as brute pike often binge-feed around lunar changes. Fruitless hours of fishing can turn on a dime the minute the moon is rising, setting, overhead, or underfoot. You can often outfish everyone else by timing a visit around a change in the moon, even if it occurs during a time of day not synonymous with good fishing.