One Trick Bunny: This Streamer Will Fool Just About Any Gamefish

Photo by Will Styer At the tying vise, you can make streamers as complex as you want–creating jointed bodies, adding... 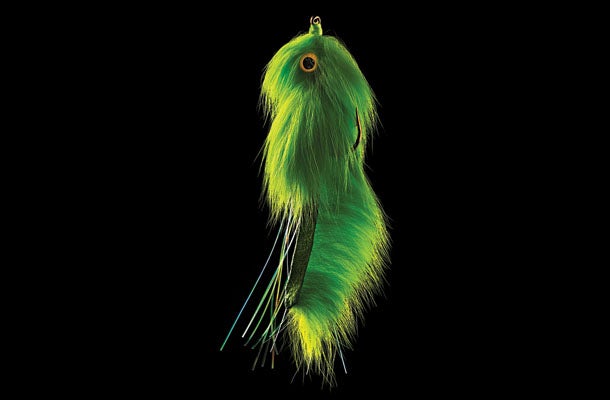 Photo by Will Styer

At the tying vise, you can make streamers as complex as you want–creating jointed bodies, adding rubber legs and plenty of other synthetic materials. But any streamer junkie knows it doesn’t take much more than a fluttering strip of rabbit fur to entice an aggressive gamefish. This pattern, which I call the One Trick Bunny, is great for novice tiers or seasoned vets looking for a quick streamer that’ll catch lots of fish. It may not be the sexiest pattern in your box, but it often outfishes those fancy ones that’ll cost $5 a pop at the fly shop.

1. Lock the dumbbell eyes into the notch on the popper hook. I use these hooks because the groove prevents the eyes from rotating and keeps them closer to the shank, reducing the fly’s overall profile.

2. Tie in the bunny strip just forward of the hook bend, leaving a 2- or 3-inch tag for the tail. If you’d like to add some flash, tie in a few strands of Flashabou on top of the wraps that anchor the strip.

3. Wind the bunny strip forward over the shank, making sure to pull fairly hard to create tight wraps. Lock the strip in place with thread just behind the eyes. Crisscross the strip once around the eyes, make a few more spiral wraps with it around the shank in front of the eyes, then lock the strip down with the thread. Trim the excess rabbit strip. Add some final thread wraps, whip-finish, cement, and fish.