Photo by: Joe Cermele When smallmouths refuse every tube, jig, and crankbait you throw, rock bass eat. When you can’t... 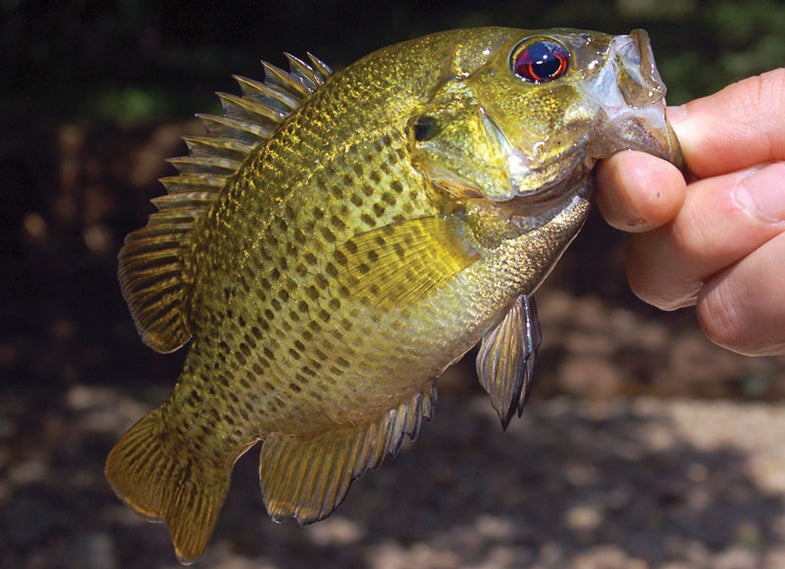 When smallmouths refuse every tube, jig, and crankbait you throw, rock bass eat. When you can’t buy a trout on a muggy afternoon, rock bass strike. It’s hard to dislike a species that fights like a banshee for its size and is practically immune to lockjaw. At the same time, it’s hard to pull yourself away from the bigger, sexier species to devote an entire day to rockies—or “redeyes” or “goggle eyes,” depending on where you live—but a steady rock bass bite has saved the day on more than one occasion for me.

Flash and Grab
Although rock bass live in still waters, I’ve always had better luck catching them in slow-moving rocky creeks and rivers. You can catch rockies in just about every state east of the Mississippi, but if you’re not sure whether your waters hold them, there’s an easy way to find out: Cast a lure or fly that’s bigger than what you think the panfish in the small stream can eat. Rock bass have larger mouths than bluegills and perch, and are more aggressive than smallies or trout. A 3-inch jerkbait or Clouser Minnow worked through a deep hole will rarely go unnoticed by resident redeyes.

Here’s another targeted method: Go gaudy, and go flashy. Woolly Buggers spun up with Crystal Flash instead of traditional hackle have always been one of my favorite rock bass flies. Add a few rubber legs for extra wiggle, and you can clean out a hole. In-line spinners are deadly, too, especially if the blade and body are both metallic.

Boulder Bass
A big rock bass—at least where I grew up fishing in the Northeast—might weigh 1⁄2 pound. (The current world record is 3 pounds.) Of all the places I’ve fished across the country, I’ve never had the feeling that I could come close to that record as much as I did while floating the New River in West Virginia for smallmouths. Every so often, while bouncing a grub through foam-covered pockets and tailouts, one of us in the boat would get thumped by a redeye that was too big to close your hand around.

Not only did our guide Larry Nibert love rock bass for the worthy opponents that they are—even though most anglers see them as by-catch—but he’d take a stringer of rockies to fry for a shore lunch over any other species in the river. Seeing fish that size got me wondering how big the redeyes have gotten in the streams I used to wade all summer without me pestering them for so many years. I think it’s time to tie some flashy buggers and find out.