Squid Fishing: The Most Underrated Bite in the Northeast

This month, an underrated bite heats up in the Northeast. Grab some jigs and watch out for the ink: It's squid season. 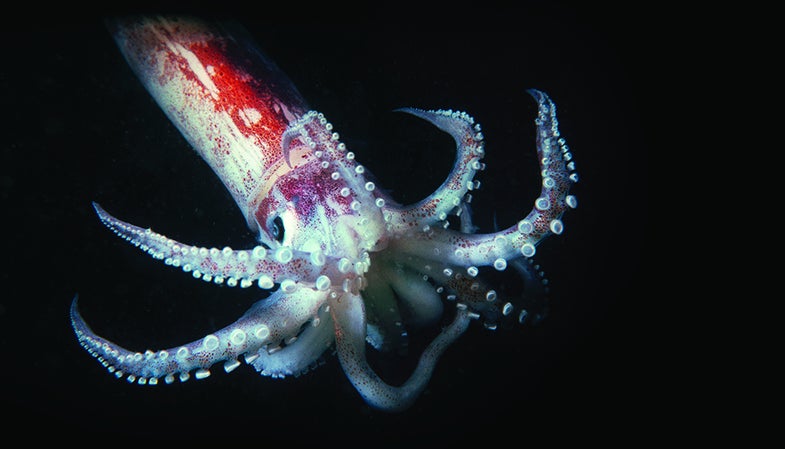 In the dimming gray of an evening in mid May, Luke Ackroyd swung a lightweight casting rod over the gunwale and let a pair of jigs drop through cool water to his quarry below. His was an unusual rig. The lower jig was a teardrop of metal with a pair of eyes painted at the bottom end. The upper jig, tied about 18 inches ahead of the first, was a clear hollow tube resembling a squat mackerel. Neither bore a hook. Instead, both ended with two rows of needlelike steel pins.

We were in an open boat just east of Nebraska Shoal, the underwater plateau a short distance off Rhode Island’s sandy southern beaches. The seas were light; the wind barely a breeze; the surface temperature a stubborn 48. A few other boats, spread along the fishing grounds, rose and fell on oceanic swells. Many were brightly lit, giving the mini fleet a carnival air.

We had arrived early. I was sipping a cup of coffee ahead of darkness, which is when the action we sought usually happens. Ackroyd’s tandem rig found the bottom in a half-knot tide. He reeled a turn to bring it clear. The jigs stopped. Ackroyd eased back slowly, furrowing his face as if perplexed. His rod stayed slumped. Judging from his reaction, it felt like neither fish nor snag.

“Hey, I think I have one,” he said, and began to reel, lifting the weight toward the surface.

Together we peered down into clear green seawater and watched his catch emerge—a squid, about 18 inches long in all, tentacles flailing, fins waving, its head spitting a dark cloud of ink as it neared the boat. It was trying to swim away in lunges, changing colors as it moved. First it was gray with dark webbing and small blue spots. Then its hues shifted in a wavelike rush. It became brick red with dark streaks. Its spots blazed turquoise.

Ackroyd swung it over the side and into my hands. It was cold. It flashed through color changes again, almost turning black, then a hot purple before settling for the moment on pink. Suction cups on its tentacles found a purchase on the skin of my wrist. I flipped over the jig, turning the pins toward the deck. The squid slid free, let go of my arm, and landed in a bucket of ice. With a noisy squirt, it stained the ice black. A smile lit Ackroyd’s face. It was our first trip of the season. We had meat at minute one.

“That was quick,” he said, and sent the jigs back down.

The Night Shift
Each year, as spring spreads its warmth along the northeastern coast and inshore Atlantic seawater temperatures climb through the 40s toward the 50-degree Fahrenheit mark, masses of longfin squid move from their offshore wintering grounds toward the southern New England coastline. Once they arrive, they can roam as near as the surf, estuaries, bridge pilings, and harbor docks; larger schools frequently hang back a short distance from shore. There they hunt and feed, often over open bottom in less than 30 feet of water. And there they spawn and die, leaving behind a new generation as they close out a brief life cycle and replenish the stock.

Longfin squid, which live from Newfoundland to Venezuela, form an essential building block in the ocean food web and are an important commercial fishery. When dense masses of them venture within easy reach of small-craft anglers, an underappreciated sport fishery unfolds.

Where we live and fish, schools of longfin squid usually turn up on either side of the entrance to Narragansett Bay in May. (Many squidders flock to a well-known bridge in Newport, R.I., dubbed the Calamari Causeway.) We find them reliably at Nebraska Shoal, where they typically spend several weeks during one of the peaks in the species’ spawning patterns. Some years they loiter deep into June.

Get past the squeamishness that some people retain for squid, and you will realize you are passing up a delicacy. Our local longfins (and less commonly seen shortfins) are tasty and good for you, and they can be prepared in seemingly endless ways, from grill to skillet, salad bowl to pickling jar, smoker to pasta plate. And they are more than food. We freeze part of our catch for bait, and feed it back to the water through autumn. Cut into strips or even used whole, squid caught in spring yield fluke, scup, black sea bass, striped bass, and bluefish.

The squid run has another welcome attribute: Squidding is best at night. For those of us with day jobs, night fisheries are one of nature’s blessings. We can work the day, eat a quick meal, fill a thermos, and be out on the water by 8 or 8:30 p.m. as darkness descends. After jigging for a few hours, we can reverse the ride and be asleep by midnight—often with a cooler that is heavy with iced meat.

Off the Hook
Ackroyd remained busy hauling squid beyond sunset and into the night. We had anchored on a promising spot and switched on four halogen lights, which were pointed at the water from the boat’s T-top. This is not an ideal way of drawing bait toward the surface—a submerged light would be much more effective—but it nonetheless attracted a few squid. They passed by, sometimes ghostlike and slowly; other times in fast-moving feeding packs. Those on the surface were a mere distraction. Many more squid remained deeper, out of sight. To find them, we worked jigs near the bottom. When the bite slowed we’d plumb the mid-water depths and connect with more squid there. Ackroyd caught them in singles and pairs; I pitched in with a steady pick. Soon the boat was a mess of dark ink splashes. The buckets were noisy with squirting, writhing squid.

Jigging for squid resembles ordinary vertical jigging, save for the peculiarities of squid jigs, which are hookless. They come in many types and in many different sizes. Some glow in the dark; some are solid metal; others are plastic-­bodied and float or sink at a slow rate; a few have small integral lights. They all work, and they share a trait: rows of spiky pins built to take advantage of the feeding habits of squid, which seize prey with their tentacles and pull it toward their beaklike mouth. When a squid reaches for a jig, the angler will usually sense its weight. Pulling back drives the pins into the tentacles. From there the angler simply reels in steadily, being sure to give the squid no slack, which can allow the barbless pins to slip loose. The trick is to keep the squid moving smoothly and vertically, dragged along by the jig, and to continue the motion fluidly as it clears the water, via a gentle lift and swing that carries the squid into the air and onto the deck or, even better, to a waiting hand.

The last steps can be elusive for new squidders. Gawking at a pinned squid boatside is almost impossible for many to resist, and also a good way to lose a squid. Still, this is not a difficult sport. On weekends, our boat is often packed with my children and their cousins, all of whom learned how to squid by age 8 or 9 and can out-squid the grown-ups—at least as long as they manage to stay awake.

Once a squid comes aboard, it goes immediately into a high-sided bucket of seawater-and-ice slurry. Squid decompose swiftly; on a warm night your delicacy can turn foul in a flash. The slurry bucket has another function, too—it becomes a reservoir of squid ink, which makes cleanup easier later. When the squidding hits lulls, we transfer the squid into bags, and bury these in a cooler with fresh ice, where they await cleaning on land the next sunrise.

On this night, the squid didn’t stop. They struck jigs yo-yoed near the bottom, and jigs flipped out away from the boat and allowed a gliding free fall. They jumped onto jigs at mid-depths, and chased jigs up into the light, almost to the surface before darting away. Ackroyd and I quit at about 10 p.m., before the squid did, with about 85 fresh longfins, neatly bagged and under the ice. These were fine specimens: With their legs, many exceeded 20 or even 22 inches and weighed well more than a pound. We had roughly 50 pounds when we headed in—enough to make for many days of bait, and to share and feast upon in the weeks ahead.

Double Down on Calamari
How many squid jigs (like the one shown) to use depends on many factors. I often fish with my children and find a tandem rig—a heavy jig at the bottom that holds its place in the tide and a floater swinging free a short distance above—strikes the right balance. It puts a variety of lures and many pins in the water, and yet it does not hijack time by interminably tangling.