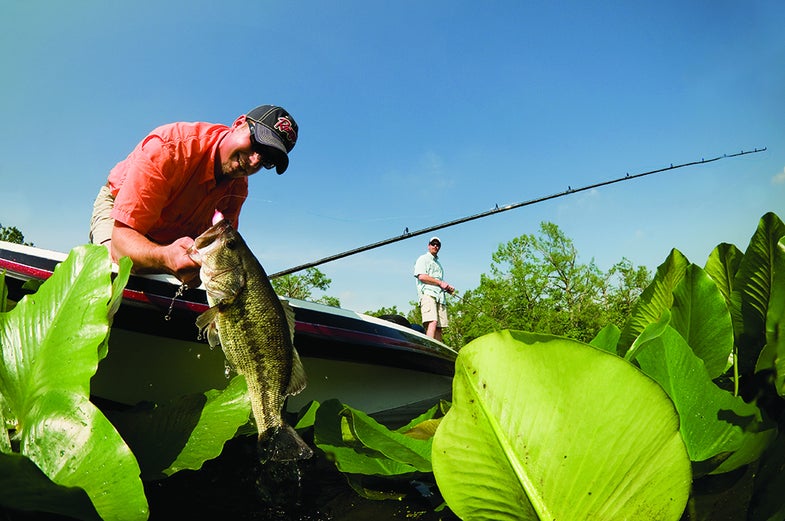 There’s no finer sound than the poink of a plastic frog landing on a lily pad. The bass finning beneath must feel the same way, given their reactions, though I can’t imagine a real frog landing with such a meaty flop. This is what I was discussing with my friend Tony as we watched my Spro Bronzeye Frog come to rest on a pad. I reeled up a little and skipped the bait onto a new perch. Five feet away, a pad shivered.

“Better get ready,” Tony warned from the stern.

I nudged the frog off the pad and into a pocket of open water, as if to suggest a real frog too nervous to sit still. When the bass blew up, I coolly drove the hook into pure air. My frog banged into the bow of our Gheenoe.

This is why we love lily pads. So much of fishing happens out of view, with the sound on mute. But not in the pads, which hold both fat moments of anticipation and make-or-break moments of timing and skill—like setting the hook after you feel the fish. I had struck too soon and pleaded nerves. “Besides, it’s bad luck to catch one on the first cast of the trip,” I told Tony. I’d merely taken one for the team.

Plus, we weren’t lacking for other spots to try. Countless patches of green awaited on the surface of the boggy lake in New York’s Adirondacks. Growing up in a flyfishing family, I took lots of rides to mountain trout outings—but gazing through the backseat window, I dreamed of catching bass in pad-speckled lakes like this one as they whizzed by.

Green Strategies
As regulars on the lake, Tony and I have come up with a sort of trapline of favorite stops. We pass up the biggest fields for pads that stand out as the only emergent weeds in an area or, conversely, those that form part of a complete mix of weeds, stumps, brush, and bogs. Pads that cover a sharp cut in the bank or frame an inlet always get a shot. When we do work big patches, we target jutting fingers, small recesses and holes, and especially slips of open water between weeds and shore. Bass love these shallow lanes, which are prime frog hunting spots.

But there’s more to fishing pads than frogs. Early in the morning, when largemouths are running down panfish and baitfish off the weeds’ deeper edges, we cast surface plugs into open water. As sunlight streams in over the mountains, the bass pull back, parking themselves just under the shade. We scale down and pitch Tiny Torpedoes as close to the pads as possible. The small propellers twirl with the slowest retrieve, keeping the bait in the zone.

When the surface bite fades, we switch to plastics—lightly weighted tubes and wacky-rigged Senkos, both of which work best on the drop. We stay on the deeper edges to extend falling presentations. Since pads block light, the area beneath them is often clear, providing great ambushing lanes, and the shade gives bass a big advantage over prey; it’s as if they are hiding in a darkened room and looking into a lighted one. You feel as if every settling plastic bait has eyes on it.

As the sun climbs overhead, the bass retreat farther into the weeds, and we follow, trading spinning rods and 10-pound fluorocarbon for baitcasters and 30-pound braid. That’s when we bust out the frogs. We like rubber-skirt legs, and prefer weedless, hollow bodies for their good acoustics. Black, white, natural, and bright green all work well. Occasionally, we’ll switch to rats for the fun of imitating a new critter—to scurry instead of to hop.

As long as the bass are game, we stick mainly with the frogs, hopping them from pad to pad and swimming them through small openings. If that doesn’t work, a speed retrieve can pull bass up, especially in sparse pads. Old-timers used to skitter pork rinds or a slab of fish belly. A Johnson Silver Minnow trailing a strip of pork or ribbony twistertail makes a good 21st-century adaptation. In either case, you want the spoon on plane and the fluttering tail to tickle the water as it skims over the pads.

Summer Classic
On this particular day, Tony and I skipped the outer-edge bite and paddled straight into the thick of the pads. After all, this was what we really came for. It’s July. It’s bass. It’s frog time. Every patch of pads seemed to have a hungry bass or two watching for a webbed misstep. Tony made a nice ­beyond-the-opening cast onto a patch of green. Poink. He paused his frog on the last pad before the black water.

Tony turned to respond, pulling the frog, which fell into the pool and got slurped in by a fist-size mouth. He set the hook, mostly in self-defense, and wrestled 5 pounds of dark-olive Adirondack bass out of the pads. I grabbed my camera. Mountains filled the background as he unhooked the bright green frog from the bass’s maw.