Stripers are aggressive, but they won’t pass up an easy meal of chicken livers if you know when and where to cast them. 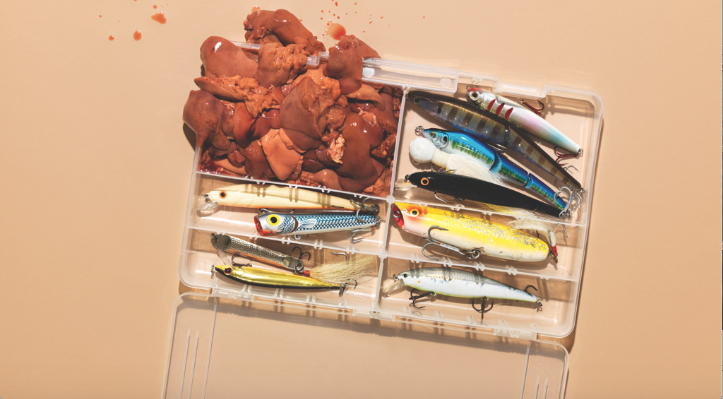 Everyone knows that stripers (both hybrids and pure-strains) are notorious for blasting a live shad or hard-chugged popper. But they also have a lazy side, and playing to it can put up more bass than the freshest livie. Don’t think trophy stripers will slurp a chicken liver? If you’ve got the guts, you’ll be shocked at the results.

Take a Break
Although the magic scent of fresh chicken livers will draw stripers from afar, anchoring up in a known bass honey hole is the way to go. Breaks off main-lake points are good bets, especially if you mark baitfish. Pure-strains and hybrids chasing bait will climb on a dead-sticked liver that requires less energy to eat. Focus on the low-light hours at dawn, at dusk, and after nightfall.

Turn Up the Juice
Once you’re on anchor, spill all the juice from the liver containers into the water. This makes handling the guts easier—and can ignite a feeding frenzy. If you want to go the extra mile, fill an old soup can or two with livers and freeze them. On the water, dump the frozen liver log into a small chum pot, and hang the pot overboard with a rope to keep the juices flowing and the fish sniffing for more gobs of chicken goodness.

Depth Charged
I use slip bobbers to set some lines away from the boat, but the vast majority of the hits will come on a “down rod” directly underneath. For this setup, use a simple slip-sinker rig with a piece of liver threaded onto a size 5/0 hook, but instead of dropping it to the bottom, set it straight below at whatever depth you’re marking fish. A spinning reel with a bait-runner feature is perfect, but if you don’t have one, keep the drag set lightly, because the run after the grab won’t be slow.

Playing Chicken
You want the freshest livers possible. Always check the expiration date on the container and make sure they’ve never been frozen. After you’re stocked, don’t freeze the livers unless you plan on stuffing them in the chum pot, as they’ll become too brittle once thawed. On hot days, store the baits in a cooler to prevent softening. It doesn’t take much liver to get a striper’s attention, so trim each into three or four smaller pieces. If you have trouble keeping them on the hook, wrap them in small pieces of panty hose to form little pouches, and tie the tops with sewing thread.