The Bonefish Vacation: A D.I.Y. Stalk on the Flats

Photograph by Brian Grossenbacher It’s 10 a.m. and I have three hours before I meet my wife for a beach... 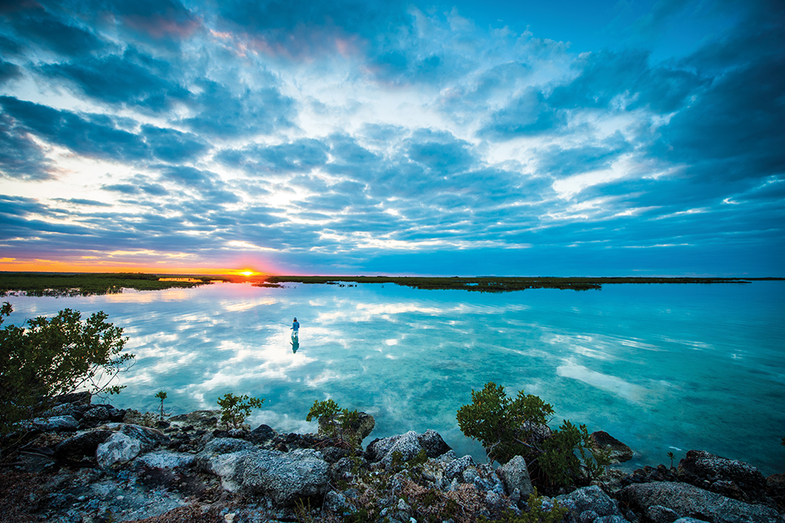 It’s 10 a.m. and I have three hours before I meet my wife for a beach barbecue on the north shore of the island. Until then the flat before me—a huge expanse of turquoise water—is all mine. Along with the bonefish flooding in with the incoming tide.

I wade in with the same caution I’d use on a big-game stalk, since bonefish spook easily. I stop when the water is just below my knees. Much deeper and I won’t be able to see the fish. An angler on foot simply can’t see as deep or as far as someone on a flats skiff. I put the sun at my back so it lights up the bottom of white sand and marl.

I work out about 10 feet of line and then hold the 10-foot leader against the rod grip, a pink Crazy Charlie dangling and ready to be dropped in front of a bonefish’s nose at a moment’s notice. I peel another 30 feet off the reel and let it drift behind me. I’m ready.

I creep along the flat, but since I’ve learned that it’s easier for me to see bonefish if I’m not moving, I mostly look. I scan all around me, straining to peer through the water column. Finally I spot something slightly out of place: a dark spot 40 feet out, moving. I’m not actually seeing a ghosting gray bonefish but its shadow against the white sand.

My heart thumps. I make two false casts, double-haul, and shoot. The cast feels on target—a little too on target. The shrimp pattern lands with a plop right on the bone’s head. With a powerful tail kick, it rockets away. Flushed fish. Right, don’t forget to lead a cruising bonefish. Another frustrating mistake in a long list of them, but one that I’m positive will bring me closer to my goal: catching my first D.I.Y. bonefish.

Going Solo
This is our third vacation to Providenciales (better known as Provo) in the Turks and Caicos Islands. We come to escape the cold Northeastern winter, but I don’t go anywhere without packing a rod.

Like many islands in the Caribbean, Provo makes an ideal destination for a family vacation with some fishing on the side. It has great populations of bonefish and extensive flats accessible to wading anglers. It also has some great guides who could put me on lots of bones. But guided flats fishing costs big bucks, and I don’t want to spend a day away from my family on a short vacation. I’d rather fish every day, slipping away for a few hours, and try to catch fish on my own.

On my first trip I studied Google maps and read guidebooks (I highly recommend Do It Yourself Bonefishing by Rod Hamilton and F&S editor-at-large Kirk Deeter). And I made plenty of mistakes. I didn’t focus on the first two-thirds of the incoming tide or the first third of the outgoing. I consistently waded too deep to see fish. I moved too much and looked too little. But I learned the island and the flats and started to fit the pieces together like a puzzle.

Things clicked on the second trip. I started seeing more fish in places where I expected to find them. I remember the rush I felt when I found a pod of tailing bones in a shallow lake as the tide drained away. Strong crosswinds, however, kept pushing my fly off target. Another mistake, one that I addressed back home through hours of casting practice.

Third Time’s a Charm
Back on the flat during our latest trip here, my bone quest has turned into a thing. It hadn’t started this way, but now catching one on my own is more important than catching 100 with a guide.

It’s been slow this morning, and it’s time to go. I reel up and start wading back quickly because I’m already late. About 20 feet from shore, a bone shoots from the beach right past me, traveling at approximately 100 mph. Another flushed fish. Right, always fish all the way back to shore. One more hard-earned lesson to add to my list.

I make it back in time for fiery jerk chicken, a cold Turk’s Head beer, and a fun afternoon of snorkeling. I don’t know it yet, but my fishing trip is already over. That night a storm will roll in, and the cloud cover and heavy wind will make the flats unfishable.

This time I would’ve gotten it done if only the end of the trip hadn’t been blown out. I’m sure of it. Maybe next time I’ll get a guide. Maybe. But probably not. When it comes to my bonefish vacation, this quest has become the most exciting part of the trip.

There are loads of bonefish patterns on the market, but if you’re unsure of which ones to stash in your fly box, you can never go wrong with a simple, and classic, Crazy Charlie. And as long as you have a small selection in white, tan, and light pink, you’re pretty much set for bonefish everywhere. Patterns with materials that have some motion on their own—rubber legs, marabou, rabbit fur—are good choices for pressured fish that require a subtle retrieve. —A.L.