How to Catch Big Early-Summer Trout

When trout are feeding happily, you can catch a few or a boatload. Here’s how to have an epic day. 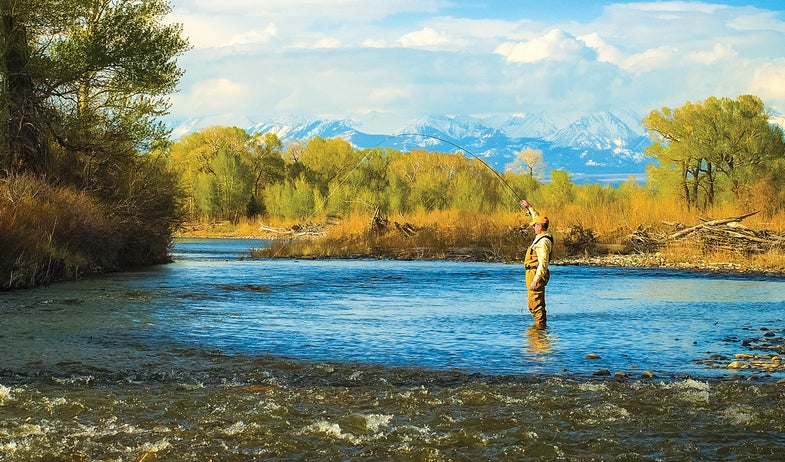 Legendary trout guru Terry Gunn and I stood on the Colorado River’s famous Prop Bar near Lees Ferry, Ariz. It was a blissful May morning, with shirtsleeve temps, a cobalt sky, and the sun barely peeking over the massive Marble Canyon walls—the type of late-spring day when the water just looks right and feels right washing around your waders. The cliff swallows had begun darting over the water, a sure signal that midges were gathering in thick clouds.

“No, they’re wide awake, and we have a bunch of them right there,” Gunn answered, pointing to a current seam about 80 feet upstream.

It took a moment, but I soon noticed a silver flash, and another. As we eased a few strides closer, the scene came into focus. There wasn’t just a trout or two in the run; there were dozens. And they moved as if they were dancing in time: gliding left into the main current where they’d twitch a bit, sometimes reflecting the sun’s rays (hence the flashes), then sliding back to the right to take a rest. They did this over and over, seemingly oblivious to anything besides the tiny gobs of insect protein floating by.

I started ripping line off my reel, ready to join the party with a hero cast.

“Whoa!” Gunn said, grabbing my arm. “Man, when the fish are happy, you’ve got to ask yourself a question.”

Spring Cleaning (Up)
Four things make trout happy: cool water temps, consistently moderate flows, a steady barometer, and plenty of bugs. When all of these things come together, trout feed as if in a trance. This month and next, depending on mountain runoff, are top times to catch things just right. Across much of the country, idyllic weather brings much-improved water conditions, and where the tailwater at Lees Ferry produces a steady diet of midges almost year-round, elsewhere the first steady hatches of good-size bugs often come now, in late spring or early summer.

When the fish are on them and rising as if to a metronome, catching a few is a no-brainer, and your whole being tells you to charge in and get started. What Gunn taught me that day is that this is actually a time to curb your enthusiasm and set your sights higher than on merely catching a few. The guide’s “happy-fish” playbook consisted of a list of don’ts, most of which sound simple but are anything but easy when there are noses breaking the surface.

• Don’t throw bombs. There’s a time for fishing fine and far off, Gunn explained, but this isn’t it. When trout get fixated on feeding, you can usually wade close as long as you’re careful. Give yourself easy casts, which tend to be more accurate, softer-landing, and less apt to alert fish.

• Don’t cast a lot. In fact, you should cut your cast frequency by at least half, he told me, which is the opposite of what most guys do when the surface is boiling. Let a trout rise three times to eat naturals before you show it a fake, and it’ll stay happy.

• Don’t overthink things. The hatch is usually apparent here, so match what you see. More important, if you get refused, size down, but keep the same basic pattern and color. This is no time to try to raise a fish with an attractor pattern, for example, because anything unnatural can snap happy trout out of their spell.

• Don’t go trophy hunting. Of all of Gunn’s rules, I found this one hardest, and the most counterintuitive. When feeding conditions are perfect, big trout will often feed right in with smaller ones, and when you see that big head break near the head of a pod, your instinct is to cast to it. Don’t.

In order to catch that big fish, Gunn said, you have to cull the smaller ones from behind it first. Otherwise, you will line those fish, and their reaction will put the big boy on alert. Instead, cast to the closer fish on the downstream side first, fight them carefully away from the pod, let things calm down between fish, and then go for the alpha trout.

Happy Ending
Gunn had grabbed my leader and fussed with it as he coached. “They’re on midges,” he said finally, handing me back the line, now sporting a dry-dropper rig, with an Adams Irresistible on top to imitate a cluster of large midges, and a black, beadhead Zebra Midge suspended on about 18 inches of 5X tippet below that.

Then we went to work, casting close and carefully, picking off fish from the near, downstream side of the pod, and methodically working up. All the while, we made sure to keep the happy fish happy. About halfway into the run, I landed an 18-inch rainbow that measured 7 inches back-to-belly, and an even heavier one a little farther upstream. Gunn netted the fish for me, and then took in the scene—the marble cliffs, the cobalt sky, the swallows.

“You only get so many days like this in a lifetime,” he said.