A trip to Maine proves that some skills, no matter how ancient, will never go out of style. 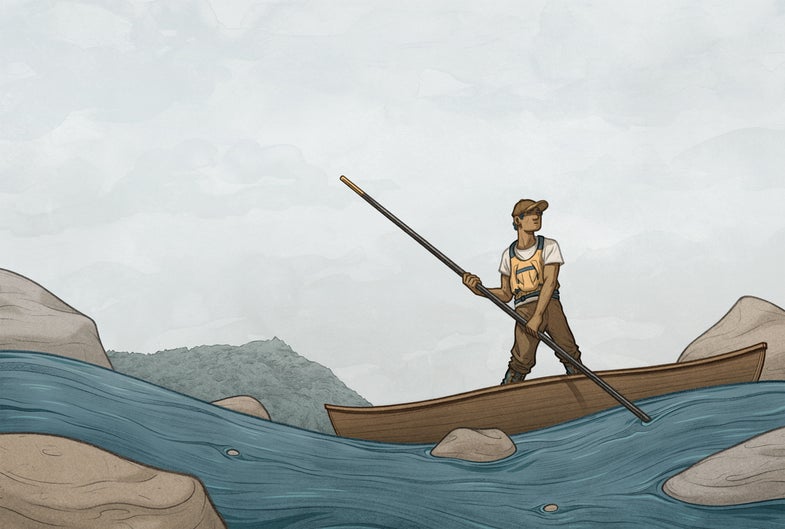 The river pours between the boulders, each scarred with red and green paint left by canoes that didn’t thread this needle quite neatly enough. Standing in the boat, I twist to the right to plant the iron tip of a 12-foot-long spruce pole into the riverbottom, snubbing the canoe to a stop. The next move is the tricky one. I shift hand positions, grasp the pole tightly, and twist from the balls of my feet all the way to my shoulders. The bow torques to port, catches the current, and ferries across stream to send a V of clear water over the lip of the ledge.

“Nice save,” says Bob Thompson, watching from the bow. The grizzled former Maine game warden and longtime Maine guide has been schooling me on poling techniques for most of the morning.

I grin with relief. This was a long time coming. I’ve wanted to learn to pole a canoe through rapids ever since I saw a photograph of an old Mainer hard at the skill in National Geographic way back in 1973. In the photo, the shoreline was fanged with dark spruce, the river angry with whitewater. The man wore a wool plaid shirt and stood in a half crouch, centered in a wooden canoe with bent cedar ribs like bleached bone, and in his hands the man held a stout straight pole. The photograph was alive. I stared at the image and thought: One day.

Now I’m on that very river, the famed Allagash Wilderness Waterway of Maine, with a stick in my hand and another old man in the boat, teaching me one of the oldest skills of the ancient North Woods.

It’s hardly news that many of these old woods-ways are fading fast. When is the last time you carved a feather stick? Why perfect a trucker’s hitch when cam straps are three for $9 at the big-box store? There’s no need to sweat over a whetstone when Amazon will drone-ship a gizmo that guarantees a wicked edge.

For many, I imagine, these skills are touchstones of the past, a way of staying connected to roots and heritage. For others, they serve as a backup plan—if the GPS goes blank, we take solace in knowing how to navigate by the stars. But these perspectives cheapen old-school skills. Most of them weren’t valuable because they were newfangled at the time. They were valuable because they worked. Because there are times when knowing how to shoot iron sights is the best solution to the challenge at hand: Plan A, not Plan B.

Poling a canoe, for example. Over two days on the Allagash I learn how to move a boat in swift water too skinny for a paddle, and how to hopscotch upstream by poling from one calm eddy to another. I learn how to put a canoe in neutral with a pole, move it over, forward, upcurrent, sideways—all with nothing more than know-how and a stick. There are sketchy moments. Twice I nearly flip the boat by planting the pole downstream, wedging the gunwale against the pole. But I’m not half-bad standing upright, feeling the river in the balls of my feet, hearing the metal clink of the pole foot finding purchase in the cobble.

Then the wind comes up late one morning, and it’s clear that I’ve been swimming in the baby pool the last couple of days. I crab forward with all of my strength, heaving on the pole, but the canoe pirouettes across the river. We’re going nowhere until Thompson and I pick up the paddles and stow the pole under the canoe thwarts for the rest of the ride.

But I am hooked on the old ways by now. And inspired, because even before I picked up the pole, not 30 minutes into our Allagash overnight, I saw how the past remains relevant in the big woods.

Early during our first morning on the river, Thompson and I rounded a bend into a scene of chaos and confusion. On the riverbank, two teenaged boys huddled together, soaked to the skin, holding canoe paddles. Eighty yards downstream, a small flotilla of canoes had rafted up below the rapids, with more kids watching a single canoe and its two adults paddling furiously against the current. And in the middle of the river, a swamped canoe was pinned upside down on a rock, its bottom bashed in like a soda can.

In an instant, Thompson took it all in and barked instruction. “We’re making an eddy turn behind the next boulder. See it?”

Once in the eddy, we stowed our paddles and Thompson pulled out the pole. He deftly pushed his way upriver, boulder hopping, eddy by eddy, climbing the current until we were abreast of the swamped canoe. We hoisted it on top of the rock, emptied the boat, and set it afloat, lining it through the remaining rapids to the kids waiting below.

Could we have achieved this without poling the canoe? I doubt it. And not so quickly and with such grace. And we certainly would have missed the looks on those young men’s faces, dripping water, mouths agape, as they watched the old man do something extraordinary: standing up in the boat, pushing the canoe up the rapids, climbing the river with a stick.

GEAR TIP: It’s in the Bag

By midday, the bottom of a canoe turns into a slop bucket of gear-fouling muck, muddy water, and spilled beer. That’s not a great environment for reels, maps, and smart­phones. Keep it all clean, dry, and old-school classy with the high-and-dry Frost River Canoe Thwart Bag ($85; ­frost​river.com). Waxed canvas keeps your stuff dry, and the heavy leather and brass means you’ll hand it down to your kids.