How to Catch Summer Bedding Bluegills

Loading the boat with bluegills for the frying pan is the best way to kick-start summer. 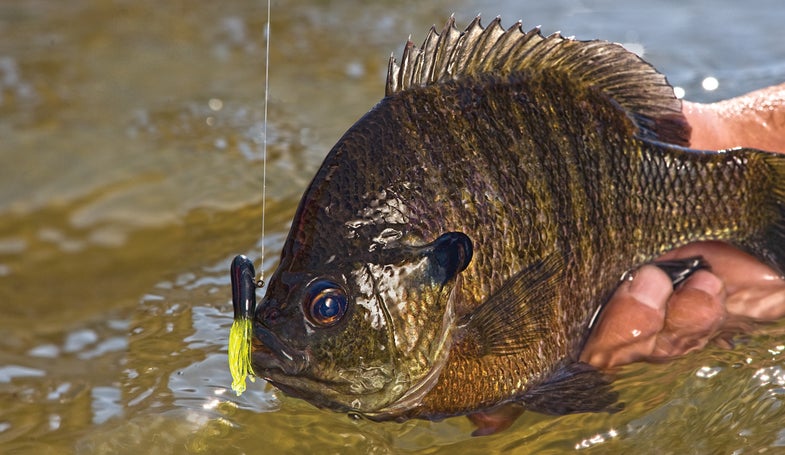 The shellcracker is wearing his tuxedo. That’s what serious bream fishermen call the vibrant mix of colors the males assume when they’re “on the bed.” This fish is a handful, but I am able to get just enough of my index finger on his belly to apply a little pressure. I brandish the fish toward my wife, Michelle, who’s sitting in the middle of the boat.

“Put him in the live well right now!” she says. “I sweartahgod, Will Brantley, if you spray me with another fish I’ll beat your—”

“Do it!” my brother, Matt, yells from the back deck.

I’m not about to back away from the challenge. A gentle squeeze sends a stream of shellcracker milt halfway across the boat, right into Michelle’s lap. She gets mad as hell, too. This is the same little prank that has sent Matt and me into hysterics since we were kids on summer break. For us, it’s just another part of bream fishing—along with red worms and Aberdeen hooks—and we’re not about to let Michelle get in the way of tradition.

Michelle doesn’t stay angry for long. Her spinning rod suddenly bows over, and she’s not long into the fight before she shouts: “Feels like another ’cracker!” Actually, this one turns out to be a giant copper-nosed bluegill, which isn’t surprising. The best bream beds have a mix of both species—the bulk of them being bluegills—but with just enough 2-pound-class shellcrackers (a.k.a. redear sunfish) to keep things interesting.

Though a classic bobber-and-bait will catch plenty of bluegills, a slightly more specialized rig helps when shellcrackers are in the area. Those fish feed mostly on mollusks and snails on the bottom—hence the nickname—and they won’t always rise to hit bait under a bobber. They frequently nest in deeper water, too, so fishing near the bottom makes sense.

My favorite all-around panfish rig is a modified drop-shot, which consists of a 1⁄4-ounce bell sinker with a 4-inch dropper loop tied into the line about a foot above the weight. Simply pull that loop through the eye of your hook, pull the hook through the tag-end loop, and cinch it tight. This allows your bait to flutter just off bottom as you drag the weight along. With a 71⁄2-foot ­medium-​­action spinning rod, you can cast the rig a country mile, which makes it great for covering water and finding new beds.

When I’m in search mode, I frequently substitute the hook and live bait with a tiny jig or even a sponge-spider fly so I’m not constantly rebaiting. The search for beds is the most difficult part of bream fishing. They’re pretty easy to locate in a pond or small lake, but there’s an art—and maybe a little science—to it on larger bodies of water. Bream require a bottom composition soft enough for them to fan their bowl-shaped nests but firm enough that the nests don’t wash away. Sand and pea-gravel banks are ideal places to look. Typically, bream beds will be in a protected pocket, not far from some subtle change in depth, like a creek channel or a shallow ditch. Early in the season, nests may be in 10 inches of water, but the most productive beds are usually 4 to 6 feet deep. Shell­crack­ers frequently nest a bit deeper. I’ve found beds in 10 feet of water.

I have a milk run of some 30 spots that I check each year. Some of them always produce, and others are hit or miss. It never hurts to look for more. These days, side- and down-scan sonar units make finding new spots easier, as the ­honeycomb-​shaped beds are easy to see on the screen. Does that take something away from the experience? Absolutely. Namely, hours and hours of casting at empty banks.

Once you find fish—​­either with a sonar unit or by blind casting—switch to a long-shank hook and red worm, which seems to outcatch nightcrawlers three-to-one. Toss the rig into the bed and keep your rod just high enough that the line stays tight. Reel it back slowly, with frequent 30-second pauses, and chances are you’ll get a bite. Channel cats and keeper bass frequently hang around bluegill beds, and they’ll hit this rig, too. Both add substantial meat to the fillet pile.

Michelle’s on a streak. She reels in two big bluegills in a row, threads on another red worm, and fires another cast. She’s hooked up in seconds—and this time, I hear the drag slipping on her spinning reel. There’s a flash of green and yellow by the boat, and she hoists a hefty shellcracker over the side.

“Don’t you do it,” I say. But she’s already wearing a devilish grin, brandishing the panfish in my direction with a finger on its belly.

Aerated live wells are nice, but the average aluminum bream boat doesn’t have one. Besides that, bluegills quickly die when the well becomes too crowded—which is a good and common problem in this kind of fishing. For keeping your fish fresh in warm water, it’s tough to beat a collapsible wire fish basket hung over the side and tied to the gunnel. The spring-loaded door is one-way, so it’s faster than messing with the door on a live well. And when you’re trying to cast to the best spot before your wife, fast is a good thing. At about $8 apiece, you can afford a basket for every angler in the boat. —W.B.