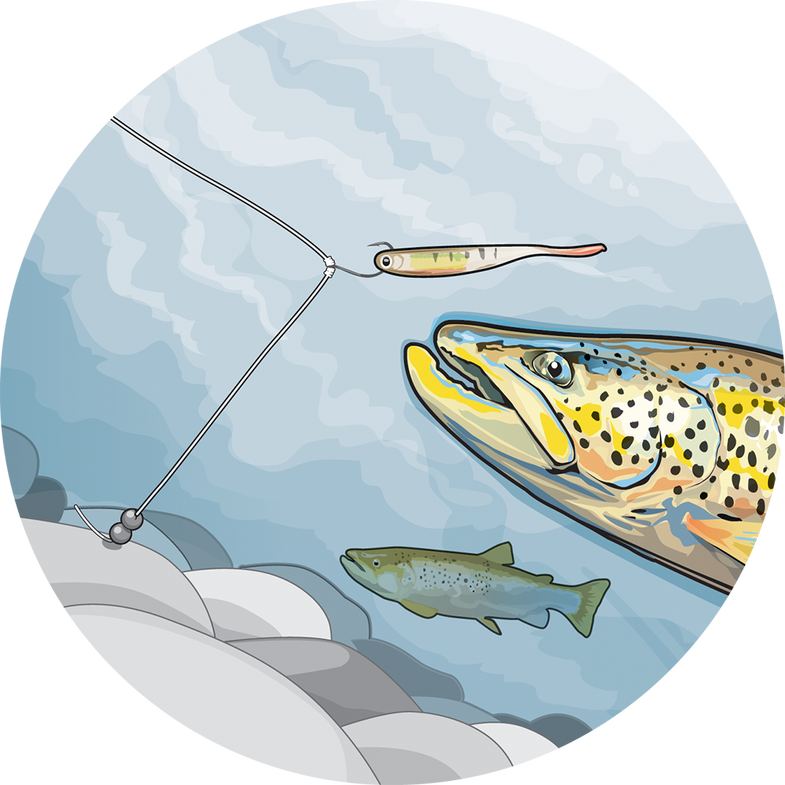 Soft plastics are right at home on smallmouth rivers, but on trout streams they’ve taken a backseat to Mepps spinners, Rooster Tails, and Panther Martins. It’s been that way for decades. Some anglers do understand the power of soft plastics in trout water but largely stick to the curly-tailed grub. If you can embrace some of the more modern baits and tactics, you’ll not only put up bigger numbers of fish but also bigger fish, and in situations where the classic spinner often comes up short.

1) Grab Hold
To reduce snags, rig your drop-shot hook in line, not on a trailing leader. Keep adding lead-free split shot to the bottom of the rig until it’s heavy enough to stay in place during the drift, moving only when you make it advance by popping the rod. Crimp the split shot loosely to help it slide off if it gets hung up.

2) Hole Shot
Drop-shot rigs are just as effective for trout as they are for bass, particularly in those deep, dark holes with bottom-dwelling monsters. Those fish may let 10,000 spinners pass overhead, but a drop-shot can keep a soft-plastic minnow in place on the bottom, wiggling away until a brute can’t help but strike.

3) A Little Jiggle
As you slowly work the drop-shot through the pool, impart action to the plastic by gently—but rapidly—shaking the tip of the rod. It doesn’t take much movement to get the bait dancing and quivering in place.

4) Slip One Past
Whereas large slip floats may splash too hard in small streams, small slip indicators designed for flyfishing let you stay stealthy while drifting soft plastics through eddies and seams. Set the float stop so the plastic can fall three-­quarters of the way to the bottom during the drift.

5) Leg Work
Soft-plastic crayfish, hellgrammites, and leeches rigged on a tiny jighead work best for slip-floating pocket water. Their wider profiles allow them to fall more slowly and naturally, and their legs and appendages flutter in the current, making them look appetizing without the need to create action with the rod tip.