The Rat Pack: Step Up Your Topwater-Bass Game With Rodent Lures

If you don’t think the bass in your lake are into eating big, nasty rodents, think again. 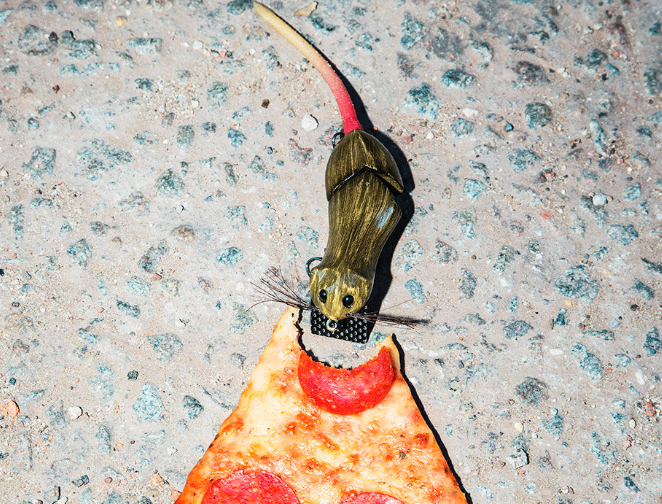 Many bass anglers take one look at a life-size topwater rat lure and see a gimmick. But those who know better see a secret weapon. They understand that bass are genetically programmed to recognize small mammals as food—regardless of whether or not the bass they’re casting to has ever laid eyes on a live rat swimming overhead. Once you embrace that fact, the idea of throwing an 11-inch plastic rodent on the local pond suddenly doesn’t seem so silly. I talked to the top experts in the rat race to pick their brains on everything from rat-lure misconceptions to making these baits come to life on the water and sealing the deal when a bass attacks. Their creations and insights should cause you to scoff less and set the hook more.

Rules of the Rodent

A big fallacy among rat skeptics is that these lures catch only the biggest bass. According to BBZ-1 Rat designer Bill Siemantel, that couldn’t be further from the truth. He believes if anglers would just try a rat on their local waters, it wouldn’t take long for them to see an increase in overall productivity.

“Most people would be shocked by the number of 1-pound bass that will come up and hit a 10-inch rat,” Siemantel says. “Fish of all sizes recognize a rat as a source of protein. Sometimes I swear it catches more small fish than big ones.” But you shouldn’t think of these lures purely as imitations of a specific food source, he adds. They shine as -general-​purpose topwaters that pull reaction bites when others aren’t working. Spook-style lures, for example, can be very difficult to work on windy days, when there’s a chop on the surface, but his heavier rat will walk through nasty surface conditions and get bit.

Siemantel and Brian Schmidt, maker of the Matte Rat, both say that rodent lures can catch fish all day if you throw them in the right places. “Fish around docks or rocks where rats and other critters naturally live, and you can hook fish almost anytime,” Schmidt says. “But if you’re looking for really big fish, I believe your chances are best in low light or after dark, because those real heavy bass are nocturnal feeders.”

Along with Clayton Bryant, designer of the CL8Bait Water Vole, they agree that once the sun sets, you can throw a rat anywhere, regardless of proximity to the shoreline, and it may well get drilled. This is when big fish lose their wariness, especially on highly pressured bodies of water, and start searching for big meals.

When it comes to working a rat, there are no set rules. “Don’t overthink it,” Siemantel says. “Throw it out, let the rings disappear, and reel it in steadily with the rod tip down.”

Bryant, as well as many anglers who buy his Water Vole, likes to get more aggressive. “The reason my baits are made to be so durable is because guys like to cast them onto the rocks or bank and pull them back in so they plop,” he says. “This sounds like a real animal hitting the water. After the splash, they give it a twitch, and then just let it sit still. Following that long pause, they’ll pull it a couple of feet and let it sit again.”

There is consensus among the designers that pauses in the retrieve are key. Schmidt says that the length of the pause should be determined by time of day and water temperature. As a general rule, he makes short pauses in his slow, steady retrieve at night or when the water is warm. The colder the water and brighter the sky, the longer he’ll wait before bringing the rat to life again.

“No matter what the conditions or how long you stop the lure, most hits come on the pause,” Schmidt says.

If you figure that a bass committed to hitting a topwater rat is going to smash it with gusto, you are at least partially correct. Those massive hits are not necessarily a sign, however, of a 10-pounder. It’s often the opposite; a soft, subtle take usually indicates bigger fish.

“I think that when a smaller bass is tracking a rat, it knows it can’t incapacitate and eat the prey all in one gulp,” says Schmidt. “Any fish taking on a meal it can’t handle in one shot is going to try to stun it first, and then turn around and eat it headfirst. That’s why the most violent hits are often from smaller bass.” With these, Schmidt is patient about setting the hook. “I usually wait until the fish has the bait fully submerged.”

On the other side of the coin, the subtler hits from the biggest fish require you to set the hook the instant you see anything different or feel the slightest tap. “I’ve seen many 10-plus-pounders come up and barely nudge a rat,” Siemantel says. “I think they check the hook to see if it’s a fish fin. But if you’re quick to react, you’ll hook those big ones.”

To make sure you nail the stick, Siemantel recommends sweeping the rod to the side—not up—when a fish eats. Because rat lures are big and buoyant, you want to put as much force into the set as you can without moving the lure very much. The side sweep gets that done.

You may want to tweak your setup to deliver these big baits properly, and hammer that 10-pound hawg when it decides it’s in the mood for a furry meal. Siemantel says any dedicated flipping stick will be stout enough to cast his 10-inch BBZ-1 Rat and will have the backbone to drive the hooks home. Matte Rat maker Schmidt likes to fire his 11-inch rodent on a swimbait rod, and both Schmidt and Siemantel praise Shimano’s Curado 300 series baitcaster for a rat attack. As the Water Vole is slightly smaller, Bryant uses a 7-foot, heavy-action baitcaster. All three designers say 50-pound braid is their line of choice, and unless they’re fishing clear water during the day, they’ll skip a leader and tie their rats directly to the braid.