These old-school patterns will outfish the most modern flies in your box. 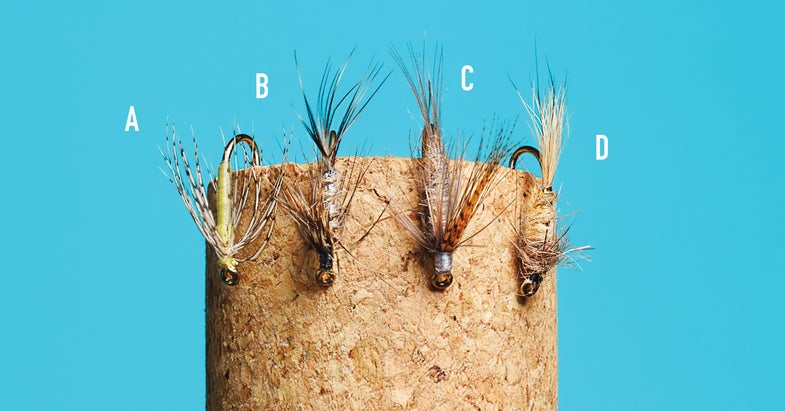 Traditional wet-fly fishing might have fallen out of favor with today’s anglers, but this centuries-old practice will outfish the most modern flies in your box. Here are the four essential wet styles.

➞ Also known as spiders because of their long, flowing hackles that look like legs, soft hackles are typically sparse, with slim bodies and ground-bird hackles wound at the head. By varying the hook size, body color, and hackle color, you can tie one to match any hatch.

➞ Wingless wets differ from spiders in that the hackle is wound not at the head but over the front third of the body. Their fur bodies are often tied on dubbing loops, and thread color is a key element in the rough, spiky body. These flies are supremely versatile; I’ve even fished them on the surface like a dry.

➞ The most prominent feature of a winged wet is—you guessed it—the wing. Some of these patterns can get pretty fancy, but I prefer more muted versions that imitate specific bugs, like the classic Dark Hendrickson or Light Cahill. The wing material can be stiffer quill or softer fibers like wood duck or mallard flank.

➞ While not true wets, fuzzy nymphs still belong in your box. The bodies of these buggy, preemergent patterns trap air bubbles and move like no lacquered nymph can. They are sometimes underweighted, which means lightly weighted wire is wrapped around the shank beneath the body material. It’s just enough to coax the fly down but not enough to suck the life out of it.

✖ I discovered long ago that certain wet flies excel as dries. I tie a Pale Watery Wingless variant that is so deadly during the sulfur hatch, I’ve dubbed it “the magic fly.” An old English soft hackle called the Smut No. 1 is one of my favorite midge patterns. And I always carry a stash of Pat Torrey’s Tiny BWO soft hackles for late-fall risers. I’ll dust these wets with silica powder and fish them on long leaders just as I would a dry. They work because they display an emerger profile when viewed from below, and as the silica wears off, the fly begins to sink into the film where the fish are feeding.