**Record fish was caught on an Alabama Rig and safely released by ODWC biologists. ** Dale Miller of Panama, OK,... 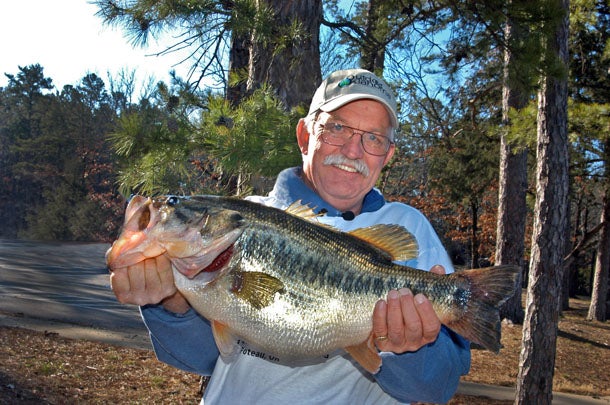 **Record fish was caught on an Alabama Rig and safely released by ODWC biologists. **

Miller is the second angler in less than a year to best the state record, which had stood for 13 years before Benny Williams Jr. of Poteau landed a 14-pound, 12-ounce bass from the same lake on March 23, 2012.

Fishing with his brother, Vonnie, at 11:30 a.m., Miller had been on the lake for only a half-hour when he set the hook on the bass. It was his first time fishing Cedar, and his first time using an Alabama Rig. He borrowed the rig, rod, and reel from a buddy, Josh Walls, who owns Bass Fanatix bait shop–and the first fish he hooked with it turned out to be a doozy.

“About the fifth or sixth cast I felt something and set the hook and, boy! Out to the middle of the lake that line went,'” Miller told the Tulsa World. “I said, ‘Boy, I got me a good fish here!'”

Miller said he and his brother “both about passed out” when they saw the size of the bass. After weighing it with their own scales, they quickly contacted officials from the Oklahoma Department of Wildlife Conservation (ODWC), who confirmed the species and officially weighed and measured the fish and certified it as the new state record. The official weight is 14-pounds, 13.7 ounces. The fish measured 26 1/8 inches long with a girth of 23 inches.

“Last month, I bought a fishing license,” Miller said in disbelief, “and this month I have the state record for largemouth bass.”

Though small, Cedar Lake is deep. It’s known for its big-bass potential, says Gene Gilliland, assistant chief of fisheries for the ODWC.

“They grow pretty fast down in that part of the state due to the long growing season, and Cedar Lake has produced several double-digit fish in the last five years,” Gilliland says. He credits a renovation several years ago by the U.S. Forest Service and subsequent stocking of Florida-strain bass by the state for setting the stage for a bass renaissance that may just be coming into its prime.

“This renovation created a ‘new lake environment’ that along with the Florida-strain genetics, long growing season, good habitat and abundant forage has led Cedar Lake to become an outstanding bass fishery,” Gilliland says.