The Japanese Way: Using Techniques From Across the Pacific on U.S. Summer Bass Lakes

It’s a fine summer Saturday, and all week you’ve been looking forward to fishing today. But when you arrive at... 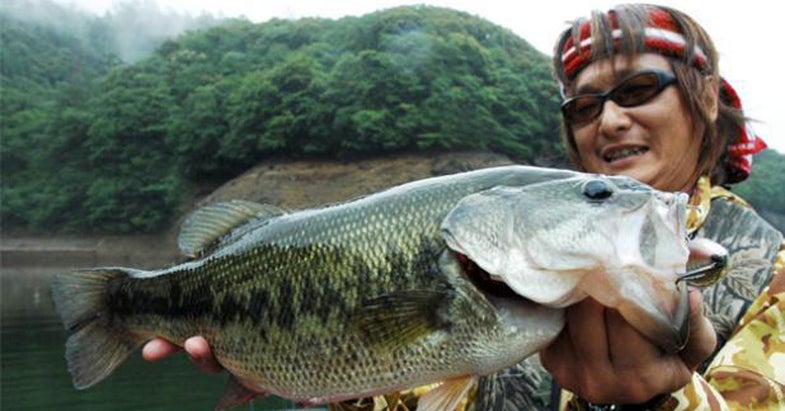 It’s a fine summer Saturday, and all week you’ve been looking forward to fishing today. But when you arrive at the lake at 5 a.m., you find 27 other boats in line ahead of you at the ramp. By the time you get on the water, hordes of anglers are already pummeling the local bass population with spinnerbaits, crankbaits, swimbaits, and topwater plugs. Worse, the dreaded weekend armada of wake-making pleasure boats and personal watercraft is beginning to show up, and it won’t be long until the lake turns into a churning maelstrom. Not surprisingly, you’ve had zero bites so far—the bass have reacted to all this chaos by either retreating to the sanctuary of deep water or holing up in the gnarliest shallow cover they can find.

Such bass fishing may be tough. But it’s way tougher on lakes in Japan.

Difficult Fishing, Year-Round
Kota Kiriyama, a Japanese bass pro who has achieved rock-star status in his homeland and is currently living in Birmingham, Ala., can detail the differences between American and Japanese conditions. By comparison, we have it easy. “Bass in Japanese lakes receive tremendous fishing pressure,” he says. “The Japan Sportfishing Associa-tion estimates there are nearly 3 million bass anglers there, and since most bass lakes are very small, they get extremely crowded. Also, many lakes have super-clear water, some with visibility exceeding 30 feet. In these extreme fishing conditions, it becomes very difficult to get bass to bite.”

Minoru Segawa, the president of Lucky Craft U.S.A., the U.S. branch of one of Japan’s leading bass lure manufacturers, points out a luxury that American anglers take for granted. “While many U.S. bass anglers fish from boats, 90 percent of Japanese anglers fish from shore,” says Segawa. “The boat angler, armed with sophisticated marine electronics that reveal bottom structure and bass, can move around the lake quickly. If he doesn’t get bites in one spot, he moves to another, and keeps moving around the lake until he finds feeding fish.

“The shore angler lacks this mobility and technology. Sometimes the bank is crowded with fishermen, and he must settle for whatever open spot is available. He casts to the same small area over and over again, and if there are any bass nearby, they grow wary and often refuse to bite.”

Japanese light-line fishing methods such as the drop-shot and flick-shake techniques have evolved out of these conditions, Kiriyama notes. “Japan has 15 times the population density of the U.S.—127 million people crowded into an area about the size of California. Many Japanese work long hours and have little free time, so rather than travel long distances, they fish only the lakes closest to where they live. Thus all but the most remote lakes receive enormous fishing pressure.

“Over time, the bass in Japanese lakes learn to avoid familiar lures and presentations, so anglers must continually try out new baits and refine their approaches in order to catch fish,” Kiriyama continues. “This often entails downsizing lures, sinkers, and lines for stealthier, more precise presentations. Many Japanese lures are tiny in comparison to American lures, and Japanese manufacturers offer invisible fluorocarbon lines in 1⁄2-pound increments from 2- through 8-pound-test, as well as tungsten sinkers that are 40 percent smaller than their lead counterparts.

“These small lures and sinkers make a quiet entry into the water instead of a loud splash, and subtle presentation methods help baits stand up to the scrutiny of wary bass.”

A Demand for Sophistication
Craftsmanship, precision, and aesthetic perfection are highly prized qualities in Japanese culture. “When I first moved to the U.S., I was surprised how rough-looking many American bass lures appeared, compared to Japanese lures,” Kiriyama says. “The paint finishes looked unrealistic, and hooks and hardware were inferior. And I saw considerable inconsistency in their actions—if I tried 10 identical Japanese crankbaits, nine of them would run perfectly, while only five out of 10 American crankbaits might run right. This is due to low-cost mass production methods employed by American lure makers in order to keep retail prices down. Japanese consumers equate discount pricing with poor quality. Manufacturers there produce far fewer lures, but they are exquisitely detailed and precision-engineered for superior action.

“Japanese bass fishermen prize these lures, take great pride in fishing them, and are willing to pay top dollar to own them,” Kiriyama notes. “Some Japanese swimbaits costing $200 apiece have a huge backlog of orders.”

High-tech manufacturing processes enable Japanese lure makers to keep up with the constant demand for increasingly sophisticated lures required to trick highly pressured bass into biting. “At Lucky Craft, we use computerized systems that originated in the aircraft industry in our design and manufacturing,” Segawa says. “For example, we have a machine capable of automatically carving a balsa prototype inside and out. This allows us to rapidly create and test new designs, and get the finished lures into the hands of bass fishermen very quickly.”

Kiriyama says he is not surprised that recently introduced Japanese lures and presentations are being embraced by American bass fishermen, especially on the professional level. “There is no more intensely high-pressure fishing situation on the planet than a BASS Elite Series tournament, where you’re competing against 100 of the world’s premier anglers. Here, you must gain an edge over your competition in order to succeed. That edge might be your Jackall jerkbait more closely resembling a dying shad than the jerkbaits other anglers are throwing, or your Owner hook sticking a fish that bit very lightly.

“This is what Japanese lures and fishing methods are really all about—helping you gain that winning edge.”

Enormous crowds of anglers fishing super-clear water. Highly pressured, educated fish that are extremely reluctant to bit. Sound familiar? Largemouth anglers on the other sid eof the Pacific Ocean face those conditions every day—and that’s why their fishing techniques work so well on American bass lakes in summer.

The drop-shot technique originated in Japan, and anglers there have tweaked it to extremes with a huge array of finesse lures, sinkers, and lines. But you can catch plenty of bass from pressured American waters with a basic version of the rig. It’s perfect for probing deep, clear water. Start with a light-action spinning rod and reel spooled with 6-pound fluorocarbon line. Run about 2 feet of line through the eye of a 2/0 Owner Down Shot hook and tie a Palomar knot. Then tie a 1/4-ounce River2Sea Tear Drop sinker to the tag end, leaving about 18 inches between hook and sinker. Rig the hook with a Jackall Crosstail Shad, and cast to the shallow part of a main-lake point or ledge. Retrieve the rig by dragging the sinker slowly along the bottom, pausing frequently while shaking the rod tip gently to activate the lure. When you detect resistance, don’t jerk hard—just reel down tight to set the hook.

Tip 2: Muscle Deep Cranking
This extreme cranking method sends a rolling-action crankbait like Jackall’s Muscle Deep 15+ ($15) to depths of 40 feet or more. Use a soft–action 7-foot baitcasting cranking outfit loaded with 10-pound fluorocarbon. Add a 1⁄4-ounce Kanji Senkin X-Metal tungsten bullet worm sinker and a small plastic bead to the line before tying on the lure. Cast to a deep point or ledge, let the lure sink to the bottom, then reel slowly, grinding the weighted plug around rocks and submerged timber. It’s awesome when lunkers are stacked on deep points.

Tip 3: Finess Topwater
The excessive noise and surface commotion of your usual buzzbaits and surface poppers may be turning off wary bass. Instead, try a smaller, more discreet plug. Lucky Craft’s Sammy 65 ($15) is a mini stickbait that’s perfect for smallmouths schooling in open water. The enticing side-to-side motion of the water-spitting Megabass Pop X ($26) will draw reaction strikes from largemouths lurking in submerged brush and grass. Fish them both on a light-action 61⁄2-foot baitcasting rod and 6.3:1 reel with 12-pound braided line.

Tip 4: Rolling-Action Cranking
Bass suspending in the water column will often shun a noisy, wide-swinging crankbait. That’s why many Japanese crankbaits have a subtle rolling action and lack internal rattles. Use your graph to locate baitfish schools, then back off and retrieve a stealthy Japanese crankbait like a Lucky Craft LC 3.5 Silent DD ($17) through or above the bait, with the same 7-foot cranking setup as in Tip 2. Suspended bass will swim up to grab it.

This hypertweaked Japanese version of the American wacky worm is fished on the same light spinning outfit you use for drop-shotting. The stealth rig pairs a salt-injected Jackall Flick Shake finesse worm, which has a slight bend molded into its tail, with a weedless tungsten Jackall Wacky-Jig Head.

Start with a 3⁄32-ounce head and work your way heavier if necessary. Hook the jighead sideways through the middle of the worm. Flick–shaking is a do-nothing approach: Simply cast the worm to a steep channel bank and let it fall to the bottom on a tight line. Both the head and tail of the worm will writhe as it’s sinking, which is when bass usually hit it. If it reaches the bottom unscathed, shake the rod tip gently to activate the worm, pause, then shake again.

Two variations: The Neko Rig is a standard Flick Shake wacky rig with the addition of a nail sinker impaled in the worm’s head. This setup keeps the worm’s noggin tight to the bottom and its pulsating tail elevated. Retrieve by alternately dragging, pausing, and shaking.

The Octopus Rig employs two Flick Shake worms instead of one and is deadly in stained water. Rig the worms crossways on a single Wacky-Jig Head to create an X and fish the Octopus like a regular Flick Shake rig. The faux worms wiggle like a gob of nightcrawlers.

From the July 2013 issue of Field & Stream
Photos by Dan Saelinger; Illustrations by Michael Hoeweler