How to Catch Trophy Largemouth Bass on Trout Swimbaits

Photo via Tackleexpress.com Before bass nut Matt Peters moved from California to Georgia, he used to fish the San Diego... 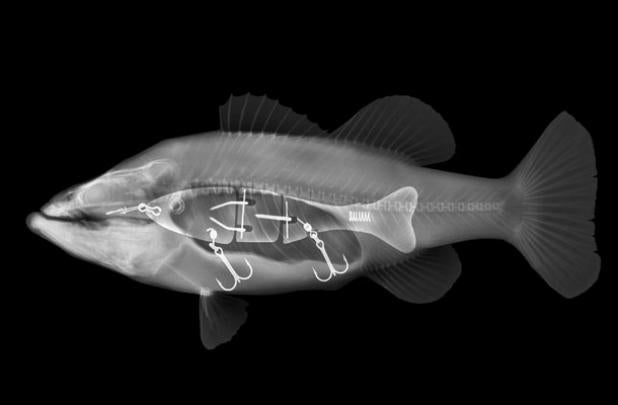 Before bass nut Matt Peters moved from California to Georgia, he used to fish the San Diego reservoirs with big trout-­imitating swimbaits for giant largemouths that grew fat on stocked trout. As Peters started to explore new waters in Georgia, he soon discovered that many of the bass lakes in the Blue Ridge Mountains were also stocked with trout. He couldn’t help but wonder: Would trophy largemouth bass in these waters strike trout swimbaits, too?

The answer is yes.

Peters has since caught (and released) close to a hundred Dixie largemouths from 5 to 11 pounds on big swimbaits. He’s caught them on film, too, for his Southern Trout Eaters DVD. His biggest Southern bass on a swimbait weighed 14.6 pounds.

Here’s how you can do the same.

Dock Worker
Docks are prominent in many Southern trout lakes—and are where Peters has caught many of his bass on swimbaits. Concentrate on those near deep water, and cast parallel to the sides and front of every dock. Bright days are best because they draw the bass into the shade where you can target them with a swimbait. After each cast, maintain the retrieve all the way back to the boat.

Degrees of Success
In water between 45 and 60 degrees, Peters ties on an 8-inch Huddleston Deluxe Trout. It closely mimics a trout’s natural swimming action—right down to the vortex it leaves behind in the water—when it’s retrieved slowly, making it the perfect target for lethargic bass in cold water that won’t chase fast-moving bait. Peters lets the lure fall halfway between the surface and the bottom (it sinks at a rate of 5 feet per 10 seconds) before he slowly and steadily retrieves it back to the boat. In water warmer than 60 degrees, Peters casts a 10-inch, double-jointed 22nd Century Triple trout, which he quickly retrieves near the surface with frequent stops and starts. The aggressive, wobbling action triggers reaction strikes from more active bass.

Stealth Mode
Trophy bass won’t tolerate a noisy approach, so Peters turns off his depthfinder to eliminate transducer pulses. He also approaches from upwind and lets the wind push him into casting range. If necessary, he runs his bow-mounted trolling motor sparingly on a low speed to adjust the drift.

1. The Softie
The Huddleston Deluxe Trout ($30; tacklewarehouse.com) is one of the most realistic trout baits you’ll find. An internal wire harness lets you add a belly hook. Peters fishes this 4-ounce lure with 80-pound PowerPro braid. If the water is very clear, he’ll add a 60- to 75-pound fluoro leader.

2. The Triple Threat
Peters’s other go-to swimbait is the 22nd Century Triple trout ($75; tacklewarehouse.com). The double-jointed design allows the 10-inch lure to swim with a bass-maddening S-curve. Peters fishes this bait on the same line as the soft swimbait.