Are Hookless Trout Flies All The Rage?

A new rig with hookless flies may help you catch more fish—and save more, too 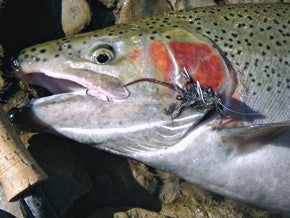 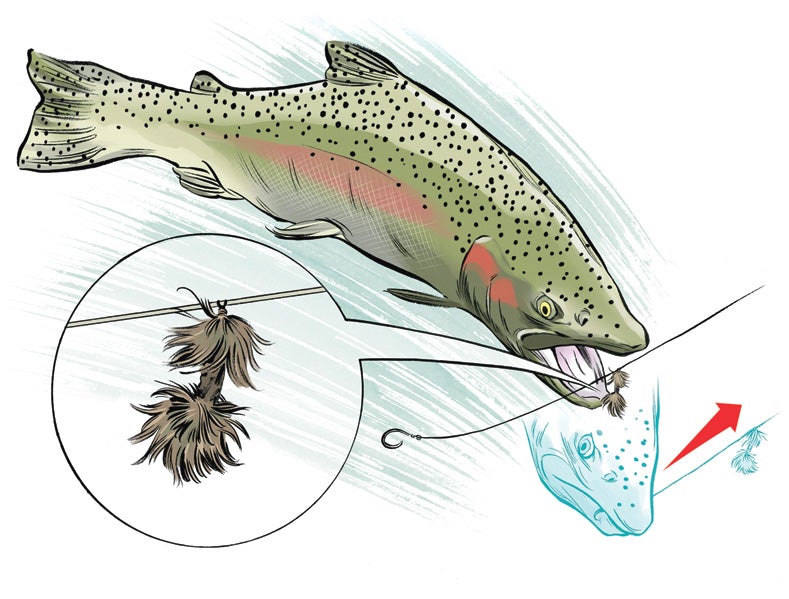 A radically new idea in fishing is rare. So when Pat Moffitt, 56, a retired environmental services engineer, told me he was catching trout with hookless flies, I laughed. After a while, he convinced me that not only was he serious, but he could prove it worked. He and I went steelhead fishing last fall in some Lake Erie tributaries, where I tried his method and was amazed.

The system works. And it’s an excellent conservation tool that will allow anglers to release more fish unharmed. It’s starting out as a flyfishing technique, but it may have greater importance for live-bait anglers. It has, however, raised some controversy.

Moffitt’s flies (moffittangling.com) are tied on rubber tubes, each with a small round eye that can be looped on a leader with a threading tool. The rubber makes the flies flexible and provides enough friction to keep them from sliding on the line. A barbless circle hook–Moffitt’s own design–goes about a foot below the fly. You tie it on with a snell knot, with the leader coming out of the bottom of the hook eye, which ensures that the hook will rotate properly and dig in when it hits a fish’s jaw.

You fish the whole rig using any common flyfishing scheme–dry or wet flies, streamers, or nymphs. (Moffitt and I were deep-drifting egg patterns and nymphs.) When you feel or see a fish grab the fly, strike as you normally would. There’s no need to wait as you do when you’re fishing circle hooks with bait. As the leader is pulled through the fish’s mouth, the bare circle hook is pulled against the hard outside line of the fish’s jaw, where it rotates against that edge and hooks the fish. This works at least as well as hooking fish with flies tied on J-style hooks, and at no time did I feel this odd rig was causing me to miss a taking fish.

The advantage lies not in hooking more fish but in doing less damage to those you want to release. The mechanics of Moffitt’s system are such that it’s virtually impossible to hook a fish in the tongue or gullet, inside the gills, or in the eye, as sometimes happens with conventional flies. In two days of fishing with Moffitt, not once did I see anything other than fish hooked relatively harmlessly on the outside edge of the jaw.

There’s been a lot of fuss on various Internet message boards to the effect that Moffitt’s rig is just a gimmicky way of snagging fish. I disagree.

Snagging, to me at least, means intentionally (or, rarely, accidentally) foul-hooking a fish that won’t take a lure, fly, or bait. In most cases it is illegal, as it should be. But Moffitt’s system won’t work at all unless a fish eats the hookless fly. The in-line circle hooks that Moffitt uses will slide across a fish’s body instead of foul-hooking it.

Things do get a little tricky, because Moffitt’s technique hooks fish on the outside of the jaw rather than the inside–a difference of maybe 1⁄4 inch. Some state rules may require fair-caught fish to be hooked inside the mouth, so check before you try this method.

Moffitt’s rig could turn out to be even more important to live-bait fishing. In-line circle hooks are widely recommended as a means to prevent gut-hooking–and thus killing–fish caught with baits that they quickly swallow.

Moffitt is developing a live-bait system, and he’s already had success with summer flounder and striped bass off New Jersey. Given the fundamentals here, you should also be able to adapt the method to your own fishing. The fish you release unharmed will thank you.