FLYFISHING FOR LATE-SUMMER TROUT usually means low, clear water and fussy fish. Catching them in these circumstances most often requires... 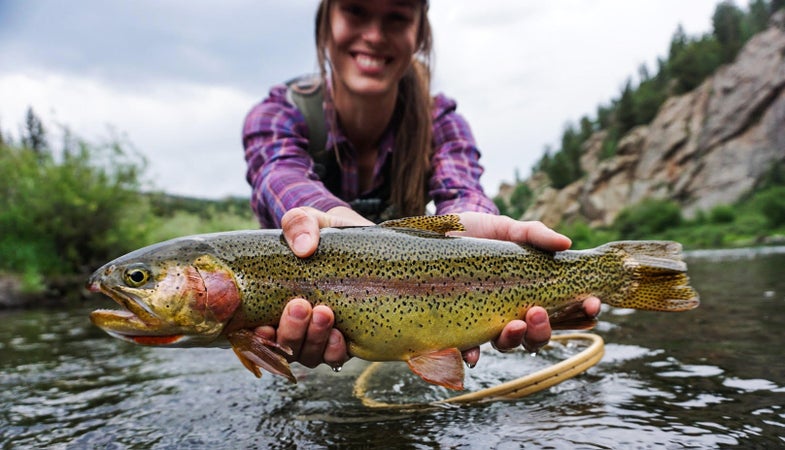 Ten ways to make the most of trout's daylong buffet.. SageRising
SHARE

FLYFISHING FOR LATE-SUMMER TROUT usually means low, clear water and fussy fish. Catching them in these circumstances most often requires minuscule flies fished on microfine leaders, a combination that many people find intimidating and difficult.

The fish themselves are part of the problem, especially those that have previously been caught and released. Trout readily learn to be selective in feeding, and the spring parade of anglers has educated them well. By the end of July, even an 8-inch brook trout has memorized the entire Orvis catalog and looks at your fly patterns through the microscope of harsh experience.

River conditions don’t help either. Freestone streams that remain cold enough for summer trout, along with tailwaters and spring creeks, are typically at their lowest flows of the year. Trout are concentrated in long, slow-moving pools, where the gentle current gives a rising fish lots of time to eyeball every insect floating past.

And the bugs are an issue, too. The major hatches of larger aquatic insects are long past. What’s left is a procession of tiny caddis, mayflies, midges, and terrestrials, most of them size 20 and smaller. With a few exceptions, such as morning spinner falls of small trico mayflies, various insects appear randomly throughout the day rather than as major hatches. That means a sipping trout may take a couple of caddis, say, followed by a mayfly spinner, some midge pupae, and then a small emerging mayfly. For trout, it’s a daylong buffet. For anglers, it’s a smorgasbord of opportunity. Here are 10 ways to make the most of it.

[1] GET FRESH MONO Start by buying new leaders and tippet spools. Nylon monofilament deteriorates with time. Last year’s leaders won’t cut it, especially in the light 6X to 8X sizes that you’ll need for this type of fishing. But fluorocarbon tippets, which you’ll use in the same sizes for fishing tiny nymphs (because fluoro sinks readily), hold up much better; last season’s spools are likely okay.

[2] CHECK YOUR FLY BOX Take the time to examine your box of small flies under a bright light at home. This pre-fishing review saves you big hassles later on the water. Use a needle to clear any obstructed hook eyes, clip away old tippet knots, and discard flies with rusty hooks.

[3] BUY NEW PATTERNS Get some newly designed microfly patterns, those that are fresh enough so that your local trout won’t have already seen them, or at least not often. (Except for the Griffith’s Gnat, all of the flies shown above are relatively new creations.) Major vendor such as Orvis (orvis. com) or the Fly Shop (theflyshop.com) create novel patterns every year, partly in a race to stay ahead of educated trout.

[4] LEARN LEADER STRENGTH Many anglers are so intimidated by the idea of fishing leaders down to 8X that they can’t adequately fight a hooked fish for fear of breaking the leader. This drill builds confidence: Tie a size 20 fly to a 7X or 8X tippet on a fully rigged rod. Hook the fly to a small tree branch or bush. Back off about 30 feet and start pulling on the rod as if fighting a fish. You’ll be surprised at how much force you can steadily exert before the leader breaks. Know, however, that a sudden yank will instantly snap it.

[5] CAST DIFFERENTLY Educated trout are often leader-shy. They can tell the difference between a 6X and a 7X tippet, for example, even though it’s only one-thousandth of an inch in diameter. One solution is to make a presentation cast in such a way that the trout sees the fly before seeing the leader. Try using reach casts either across current or down-and-across so the fly lands an inch or so on the near side of the trout’s feeding lane.

[6] DON’T WAIT TO SET THE HOOK Visibility is a common problem with tiny flies, but you don’t really need to see them. You only have to know approximately where the fly is, based on your cast and the current speed. If there’s a rise near where you expect the fly to be, set the hook. Most of the time, this works. Some small fly designs try to compensate for their difficult-to-spot size with the addition of brightly colored materials such as a tuft of orange hair, but these aren’t as imitative as drably colored flies and don’t fool trout as well.

[7] KEEP CHANGING FLIES So you cast to a fish a few times and nothing happens, but the fish keeps rising. You need to change flies. The trick is to do it logically. Go a size smaller with the same pattern. Switch from a mayfly emerger to a spent spinner. Move from a lighter pattern to a darker one. By following a commonsense progression, you eliminate possibilities and eventually get a take. Remember, there’s no proper sequence written in stone. You’ll have to figure it out on the water. Don’t forget to try a lighter tippet, too.

[8] PROTECT THE TIPPET It’s hard to get a good hookset without snapping a fine leader on the strike. Don’t rotate your wrist when you sweep your rod upward to strike, as the resulting rod-tip velocity will break the leader at the fly knot. Instead, raise your rod-hand forearm and the rod while keeping a rigid wrist. This gentle lift moves the line and flexes the rod without whipping it, thereby setting the hook without shocking the leader. Remember that such tiny hooks are extremely sharp and can be set with little effort.

[9] PLAY THE FISH GENTLY With fragile tippets, you can’t simply haul in a trout of any size. Rather, you have to fight it thoughtfully. Let the fish run against a lightly set drag without trying to stop it. When the trout stops running, work your bent rod to the side, keeping the fish off balance, instead of holding the bowed rod upright and trying to lift.

[10] NET IN QUIET WATER Don’t try to drag a big trout upcurrent with a light leader. I often see people attempting to do this, and the result is usually a standoff as the trout hangs in the flow 30 feet downriver from the angler, who’s afraid to pull hard enough to move the fish. Instead, wade to a quiet backwater where landing a trout will be easier. Use a net—it’s faster than trying to grab a thrashing trout with your hand and it makes releasing fish simpler. A hemostat makes hook removal easier.

SUMMER FLIES
Here are a few tiny flies—all size 20—that work on fussy trout. The Griffith’s Gnat is a perennial winner for selective, slow-sipping trout in clear water. Quigley’s Hat Creek Spider, named after the California spring creek, is a good all-purpose emerger. Harrop’s CDC Emerging Midge, developed by Idaho fly-tying genius Rene Harrop, is a deadly midge in slow water. Trina’s Budding Emerger is a low-floating, general-use fly. Tomsu’s Trico, meanwhile, is yet another variation on the trico mayflies that abound in late summer. Mercer’s Poxyback Baetis nymph is a great imitation of the midget bluewing olive mayflies that hatch in most areas in August.