Photo by Gorman Studio I always carry garden worms and mealworms during the early days of trout season, and I... 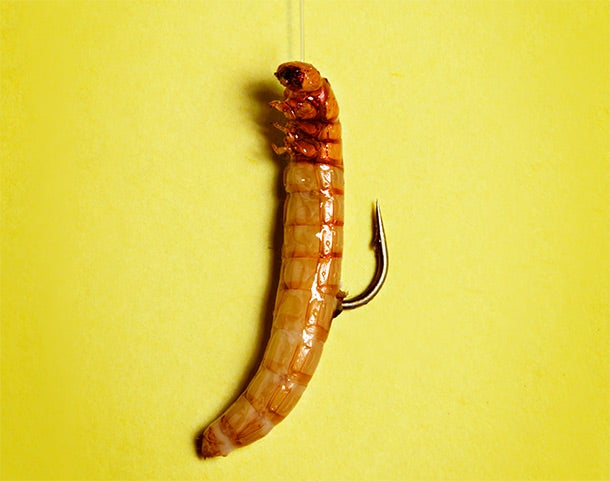 I always carry garden worms and mealworms during the early days of trout season, and I reach for the latter more often. These small, golden-yellow beetle larvae are more buoyant than earthworms, so they’re easier to keep in feeding lanes. They show better in murky water. And their size, which matches that of most trout forage, screams Eat me!

My technique has always been straightforward: Stick a hook through the middle, crimp on a split shot, and kerplunk. Connecticut angler Matt Wettish, however, has turned drifting mealworms into an art form, and he claims these baits will catch the biggest trout in any given river, no matter how pressured.

The Perch Bug-Cahill Connection
Wettish learned light-tackle stream fishing from his grandmother, who used to collect what she called “perch bugs”–a type of aquatic larvae–and drift them for trout on 4-pound-test line in Connecticut’s Farmington River. As he grew older, Wettish took up flyfishing, and as he got more proficient, he put together a strategy that combined what he knew about presenting flies with what he learned from Grandma.

“You can’t effectively present a size 18 Cahill on 4-pound-test. You need 6X or 7X tippet, which is incredibly light,” Wettish says. “I realized that the same rule applies to baitfishing. If you can’t create a good drift, you’re not going to catch as many fish.”

That’s when he started experimenting with different lines, hooks, and worms in clear, shallow water. Standard bait hooks were too heavy, causing worms to lag. Two-pound mono worked well, but 2-pound fluorocarbon, with its faster sink rate and disappearing qualities, was better. Wettish found that mealies provided the most natural drift.

“They are the closest readily available match to forage that trout eat most often, like aquatic larvae, stoneflies, and inchworms,” he says. “I’m really not doing anything that different from what every other angler does. But my technique and presentation is subtly different.” Here’s how it breaks down:

• Hooks: “A size 12 scud hook used for fly tying is lighter and sharper than a standard small bait hook. It also takes less force to set one, which is important when using 2-pound-test.”

• Rod: “I like a 61⁄2-foot ultralight spinning rod. Any longer and the rod is too whippy, which hurts accuracy and feeling. I want the rod to maintain a deep arc during the fight.”

• Rig: “I insert the hook under the first ring behind the worm’s head and thread it through until the eye and knot are completely hidden inside the bait. All that sticks out is the point and the barb. This keeps the bait perfectly in line with my fluoro. I use one or two BB-size split shot. The weights will get hung now and then, but what I want them to do is just skim or bounce along the bottom.”

• Drift: “Cast upstream at a 45-degree angle, and drift until you reach a 45-degree angle. Don’t let the bait hang downstream because it’ll twist your line. I keep the line in my left hand while I high-stick with my right to keep better contact with the point where my line meets the water.”

• Hookset: “When I get a strike, I move the rod in one direction while lightly pulling the line in the other, like a fly set.”

You can watch Wettish drift mealworms in every style of moving water, and see how he hooks and battles 20-plus-inch trout, on Real Outdoors TV (youtube.​com/​real​­out​doors​tv). As Wettish puts it, “Let the trout do what it wants to do. Get below the fish, and use the current to your advantage.” Which is something else that his grandmother taught him.