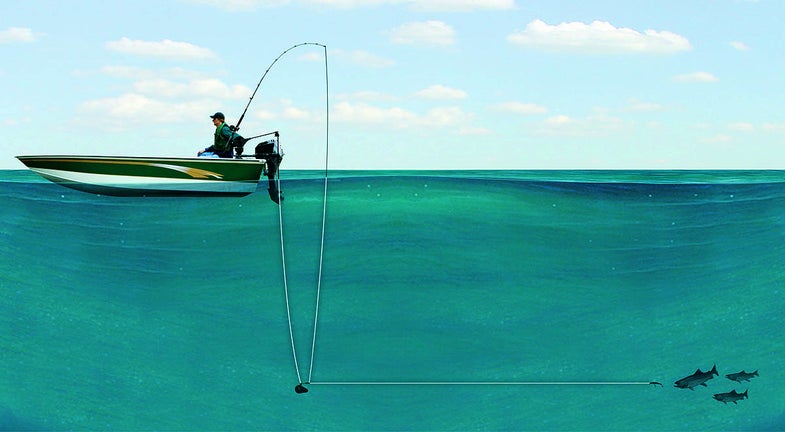 Trolling through summer’s heat can be the best way to connect with more fish more often. Fish that were concentrated near the surface or in springtime shallows have now gone deeper or spread more widely in a lake’s open waters. No other method can present an array of lures at such a variety of depths as trolling, while covering such a broad swath of water. But there’s more to trolling than simply dragging a lure behind a boat. A variety of trolling methods targeted to particular kinds of fish can radically boost your score. Here are the four best ways to rig up.

Trolling with one or more downriggers can run your lures deeper than any other method. In extreme cases, depths can be as much as several hundred feet, but 30 to 60 feet is most common. It’s a great light-tackle method, too, because when a fish strikes, the line pops out of a release clip next to the trolling weight so the battle proceeds unencumbered by heavy gear.

• Can Be Used: In deeper ponds and lakes; also in saltwater.
• Best For: Trout, salmon, walleyes.
• Boat Type: Powered boats 16 feet and larger.

How It’s Done for Trout and Salmon: A downrigger consists of a large reel holding a thin wire cable that passes through a pulley at the end of a short boom. The cable end is fastened to a 4- to 12-pound ball that usually has a fin or vane to keep it tracking straight. The whole assembly is permanently mounted on a boat’s rear deck corner. Some small portable units are designed as clamp-ons.

With the ball at the surface and the boat moving at about 2 mph, let your lure out 30 to 60 feet behind the boat. Then fasten the line to the release clip, and put the rod in the adjacent rod holder. Make sure the reel drag is set extremely light so line will pay out as you lower the trolling ball. Once the ball is at the desired depth, tighten the reel drag back to a normal setting and reel in enough line so your flexible rod tip is bowed down slightly. When a fish strikes, the tip will pop up and pick up the slack.

In most summer trout and salmon fishing, your sonar will show larger fish and schools of baitfish at or near the thermocline, that narrow band 30 to 70 feet deep where water temperatures drop radically. It’s very simple to run your downrigger weights and lures at that depth all day long.

In this least complicated trolling method, your line is attached directly to a lure without any secondary weight or device added. Usually seen as a near-surface technique, flat-lining allows you to reach moderate depths by trolling jigs or diving crankbaits.

• Can Be Used: Anywhere.
• Best For: Crappies, trout, salmon, walleyes, northern pike.
• Boat Type: Anything that moves, from canoes to center consoles.

How It’s Done for Crappies: Crappies are common targets for summer flat-line trollers. In many lakes, crappie schools suspend 10 to 15 feet deep, sometimes near structure but just as often in the open waters of the main lake. Here’s one of many possible crappie-trolling tactics.

Spool 4- or 6-pound monofilament on common midweight spinning outfits. Remember crappies are soft-mouthed; a flexible rod tip keeps hooks from tearing out. Two-inch-long, 1⁄16- and 1⁄8-ounce crappie jigs are basic. If you’re trolling with two or more rods, rig with jigs of differing weights or colors.

Slow-troll at 1 mph (best measured by a GPS unit) with one jig 30 feet behind the boat and the second jig 60 feet back. The more line you have out, the deeper a jig will run. This can be as deep as 10 or 12 feet, depending also on jig weight. Keep experimenting with line length, jig size, and color until you start hitting fish. When you do, throw out a marker buoy as a target for your next trolling pass, then match your other trolling rod to the line length and jig that took the first fish.

Planer boards can be the most effective trolling devices of all, but they are a bit complicated to use. These 7- to 12-inch floating “boards” hold your line 50 to 100 feet off to the side of the boat. Setting a pair of planers, one on each side, means you’re covering a swath of water up to 200 feet wide and are thus more likely to encounter fish. And because the lines and lures are far away from your droning outboard, you’re less likely to spook fish.

How It’s Done for Walleyes: The most common setup includes a 6-foot-high mast mounted in the boat’s bow. This mast holds two large take-up reels with cord that attaches to left- and right-side planers. The planer boards are tapered or ballasted to run at the surface.

As the boat slowly moves ahead, pay out a board on its cord until the desired distance away from the boat is reached. Then release line from your reel so your lure is running about 60 feet behind the boat. At that point, attach a release clip to your line and also to a “quick clip” that you slip onto the planer-board cord. Line tension from the trolled lure makes the clip slide along the cord all the way out to the planer board. Reel up slightly so there’s a little line tension between your rod and the board, and put the rod in a rod holder. 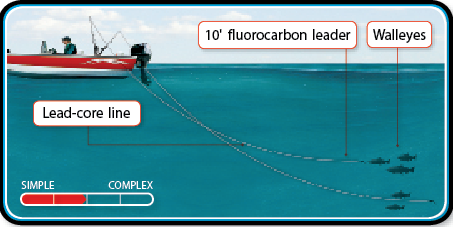 Lead-core line is the easiest, least expensive way to run lures deep. Lead-core is just that: a single-strand lead wire inside a braided nylon covering. Pound-tests range from 12 up to 45. The line is marked by a color change every 10 yards, which makes it easy to tell roughly how much line is extended. In general, each color in the water adds 5 to 8 feet of trolling depth (depending on speed). A 100-yard spool of lead-core line costs about $11. Most wide-spool baitcasting reels hold five or six lead-core colors plus some monofilament backing.

• Can Be Used: Anywhere.
• Best For: Walleyes, salmon, trout.
• Boat Type: Anything with power. Trolling lead-core from a kayak or canoe is possible but strenuous.

How It’s Done for Walleyes: In summer, lake walleyes either hold near deep structure or cruise as scattered schools across deep flats and basins while following baitfish. To get these fish, use a loop-to-loop connection to add about 10 feet of 10-pound-test clear mono or fluorocarbon as a leader. Then tie on a swimming-minnow plug, crankbait, or trolling spoon. Running the boat at about 1.5 to 2 mph, pay out enough line to reach your desired trolling depth. If your sonar is marking fish at 25 feet, for example, let out about 3.5 colors. Put your rods in holders so the rods extend out from the sides of the boat and low to the water. That way, rod flex will cushion the shock of a strike.