Hopper fishing should probably come with a warning label: Days spent drifting in clear water beneath a late-summer sky can... 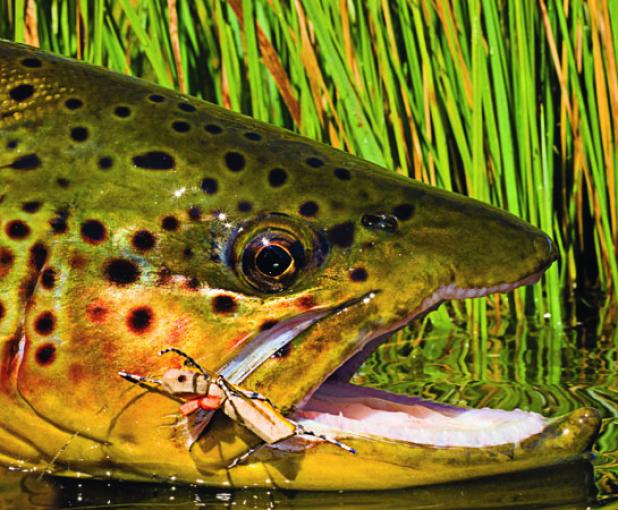 Like this one: a walleyed grasshopper twitching and drifting on a flow, going nowhere other than down the gullet of a monster trout–flyfishing’s version of hunting tigers over a tethered goat. Up from the bottom swims a fish with dime-size spots, accelerating, mouth opening, slapping at the surface like an ill-mannered bank beaver.

Well, now you know where to cast.

Memories organize around moments of drama, but for every display of piggish excess, there are a half dozen slashes in fast water and even more well-mannered rises that remain barely detectable. Put another way, imitating hoppers not only has drama, but it retains flyfishing’s delicious complexity. The same can be said of imitating crickets, the other favorite trout forage from the order Orthoptera. Through late summer and early fall, crickets and grasshoppers often end up in rivers, and imitations of them work magic on trout water across the country–and just might let you land your biggest trout of the year on a dry fly.

Research confirms the seasonal importance of such large terrestrials. In one study, scientists compared the food in the drifts of five southern Appalachian streams with the stomach contents of the resident trout. Analysis during late-summer months showed that the trout began taking terrestrials in greater proportion than they existed in the drift.

Tip-Top Hoppers
The flyfishing community has come to appreciate the importance of hoppers, which existed outside the flyfishing narrative dominated by mayflies–that is, until the rise of western trout fishing in the postwar years. Today, grasshopper patterns fill the compartments of fly boxes across the land. Most focus on two of the short-horned species: the bandwing brown hoppers that flush like small grouse, and the smaller, spur-throated yellow-and-green ones that hop everywhere but don’t fly much.

Even with limited prototypes, there are countless grasshopper patterns–a reflection of their appeal to trout and probably the general neuroses of fly anglers (see “The Elite Eight“). Most patterns come in one of three styles: foam, natural, and parachute.

Start with foam hoppers when you’re fishing fast current, particularly in situations where the fish are aggressive and you are trying to cover water. Of the three styles, foam bugs are the most ubiquitous and varied. The Big Eye Hopper (orvis.com) is a fine example, but don’t overlook some of the more local patterns at mom-and-pop shops.

In slow water, the more realistic and soft-feathered styles, such as the Dave’s Hopper or Letort Hopper, make a better choice. For selective trout, a parachute hopper pattern with a bright post can be just the ticket in riffles. The body stays in the surface film, but the top remains visible to the angler.

By Jiminy
Like grasshoppers, crickets are a venerable American bait, particularly for sunfish and smallmouth bass. Hampshire College biologist Charles Ross wrote his dissertation on crickets and spent several summers on his hands and knees along roadsides catching them for research purposes. “Motorists were always stopping and asking if I was going fishing,” Ross says. “They’d look at me funny when I said I studied crickets, like they were trying to decide whether to call 911. So after a while I started saying, ‘Yeah, tonight, down in the river.’ They’d wave, say ‘Good luck!’ and drive off.”

Vince Marinaro, author of the pathbreaking A Modern Dry-Fly Code, and other noted Pennsylvania anglers like Charlie Fox, Ed Koch, and Ed Shenk explored and promoted the advantages of terrestrials during the summer months. Their efforts helped bring crickets (and grasshoppers) to the attention of fly anglers in the 1950s and ’60s. Crickets seldom dominate a particular forage base like grasshoppers do in August and September, and that may partly explain why they have remained in the flyfishing shadows–even today. Their availability extends over a larger area, however, and a longer period of time. Trout eat them all summer, and no doubt the early-summer success of size 12 and 14 black nymphs and wet flies has something to do with the number of small crickets that find their way into trout streams.

Crickets, similar to hoppers, will float for a while after hitting the water. And whether it’s field or ground crickets, there is but the black variety to focus on with your imitations. The wonderful Letort Cricket combines an elk- or deer-hair wing and a fur body; the fly hangs in the surface film with the wing above the waterline and the body below it, which is how a cricket floats.

Splat Landing
In grasshopper country, most anglers hope for hot and breezy afternoons, because the heat gets the hoppers moving and the wind sends them into the stream. At such times, the splat of a hopper hitting water seems to have a dinner-bell effect on trout, but start with a gentle upstream approach so as not to frighten any shy fish, which are often the largest. From there add a slap or some movement to the drift–a twitch or, if that doesn’t work, maybe some quick hops. The typically clear water conditions call for a 10- to 12-foot leader, which lets you manipulate the fly without putting down trout.

The best hopper rivers flow through agricultural fields and grasslands, and a grassy, overhanging bank is a good spot for crickets, too. Pitching the cast against the bank is the classic presentation for both crickets and grasshoppers, but both bugs also end up in midstream runs.

Finally, as anyone with a basement will tell you, crickets like shade. Brushy banks with shrubs are just as much cricket habitat as fields–particularly in the East. The shadow of a boulder is one of the great spots in which to drift a Letort Cricket; the dense black fur body seems to stand out in the shady area. The rises can be subtle, so don’t be surprised if you feel some heft at the end of the line.

Good to the Last Drop
It is easy to overlook subsurface techniques for both hoppers and crickets. Once, years ago, fishing along a clear Vermont stream that often had good hopper fishing, I was achieving nothing besides sending prospective trout fleeing to the bottom.

It was hot, and after sufficient humiliation, I returned downstream to the confluence with the larger Lamoille River where my friend Ted was fishing. At times like this, you need your fishing partner to be there for you, preferably set up in the shade with a cooler, and ready to agree that the water is too low and too warm, the sun too high, the fish too…

As I walked along the bank, there was Ted, in the shade all right, but knee-deep in a narrowing riffle across from a huge ­boulder–​and fighting a trout. A good one by the looks of it.

“A yellow Muddler,” he said as I approached, anticipating my question. “A little weighted, dead drift. Small, like size 12.”

The fish, a bright 14-inch rainbow, leaped out of the water as if it were spring-loaded and working in concert with Ted to show me the worth of drowned hopper flies.

In truth, trout probably eat more sunken crickets and grasshoppers than they do floating ones. The main Lamoille River where Ted was fishing was murkier than where I’d been fishing, and in the half dozen summers I spent fishing that water, I don’t believe I ever took a trout on a floating grasshopper or cricket imitation–even though the river drains miles of farmland, and even though the clear-water tributaries, such as the one I’d been frothing up that day, often led to great surface fishing. But there was no better August fly than a black Woolly Worm or size 12 yellow or brown sunken Muddler Minnow.

Over the years I have had similar experiences on other rivers and have many times converted the fishless floating grasshopper and cricket patterns to deadly sinking patterns by letting them get soggy. Foam hoppers require split shot, but even then they don’t look as appealing beneath the surface as a Dave’s Hopper, a Letort Hopper, or a Letort Cricket.

Target the heads of riffles and chutes. The larger fish tend to be at the head, where the water is most oxygenated and where they get first shot at drifting terrestrials. Fish on a dead drift. An indicator can help, but a better strategy is a hopper-dropper rig. Tie a high-floating foam hopper on top, which also serves as a strike indicator for the smaller sinking hopper or cricket imitation on the dropper. For times when the fish want a smaller bite–typically in early September–you can replace the hopper dropper with a low-floating, size 16 black fur beetle or a flying ant.

Sure, the trout see a lot of hoppers. That’s sort of the point. Trout drifting beneath a floating hopper seem unpressured about taking the fly. Perhaps trout know that they have the capture under control. Unlike aquatic insects, which can fly off, grasshoppers and crickets can’t escape once they hit the currents, so there is no reason for a trout to hurry and strike. They can afford to be selective, if that is their mood, which it often is. These are still trout, after all.

Photo 2; Denver Bryan/Images on the Wild Side