Essentials for a day in the woods 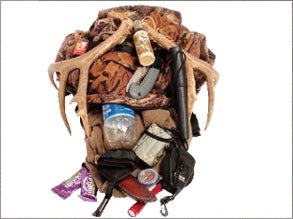 I know a macho little dude who takes great pride in walking out the door at 5 a.m. all bow season long carrying nothing more than his tree stand, bow, a release in one pocket, a tote rope coiled in the other, and his license tucked inside his hat. Two years ago he killed a buck that measured in the low 180s. It has the biggest, most symmetrical, most maddeningly perfect rack I’ve seen this side of an exhibit hall. Standing in his living room and genuflecting before the mount, I asked if he didn’t get hungry while hunting. “I don’t eat on stand,” he said, as if reciting the 11th Commandment. Thirsty? “You don’t drink, you don’t have to pee,” he said, instructing a small child. Cold? “Just kinda tense my muscles up every so often, get the blood flowing.” Compass? “Been huntin’ the same woods so long I could do it blindfolded.”

There is no arguing with a guy like this. For every point you put forth, he casts a smug glance overhead and lets that rack do the talking.

How easy is it to get turned around out there? I went out one afternoon last season without a flashlight because I was hunting a small property and was traveling no more than 150 yards from where I parked. Staying on stand until it was nearly dark because there were deer moving, I finally descended and packed my stand and gear up to leave. Then I went to retrieve two scent wicks placed all of 20 yards away. In those few moments, twilight turned to moonless dark beneath the forest canopy. I might as well have been inside a cow. Not to worry, I thought, fighting a mounting sense of panic. Simply retrace the seven steps you just took. Which I did about 25 times. Completely disoriented, I only found my way by following the distant headlights of cars to the same road I’d come in on. Bright and early the next morning, I humbly retrieved my gear.

Moral: Leave the macho stuff to Chuck Norris. It’s cool on TV; it’s stupid in the woods. Here, then, is a list of what I carry and why when bowhunting; adjust your list according to your hunting style, time of year, and conditions.

Sound like a lot? Maybe. But my whole pack weighs in at less than 9 pounds. And the farther into the woods I’m going, the more I want everything in it.