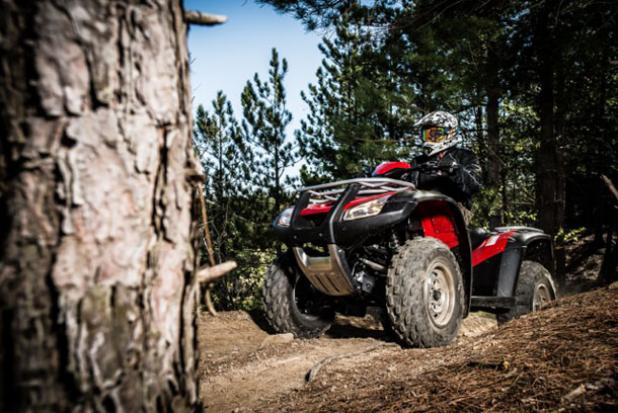 I first swung my leg over a Honda Rincon 680 — a 2006 model — on the rugged trails of Northern Quebec, Canada in 2005. Since that time, many changes have occurred in my life, the most prolific being watching my two incredibly cool kids make their way into this world. While the hands of time have dealt us all changes, for better or worse, Honda’s big-bore 2013 Rincon has remained frozen in time.

Now this might seem like terrible news to some, but the 2013 Rincon is still a good ATV — even if it can be considered “old-school” when compared to other premium machines. The Rincon 680 has always been one of my favorite ATVs to ride. In fact, I owned one myself for several years and I put many hard, trouble-free miles on that machine.

The Rincon is powered by a fuel injected, liquid-cooled 675cc single cylinder engine mounted low in the frame; engineered to keep the center of gravity low and stability high. Power is sufficient, even though the Rincon has the smallest displacement engine of any manufacturer in the premium, big-bore class. The engine is revered for its reliability and I’ve personally ridden with several owners who have odometers exceeding 10,000+ trouble-free, off-road miles. They gave their machines no special treatment, other than adhering to the routine maintenance schedule. At idle, the big single cylinder vibrates more than a twin cylinder of the same displacement, but those vibrations disappear just as soon as the engine RPMs get above idle.

The Rincon’s transmission is the only ATV on the planet, and in Honda’s arsenal, to feature an automotive-type three-speed transmission and torque converter. Every other manufacturer in the ATV industry utilizes a belt driven Continually Variable Transmission (CVT). The transmission can either be shifted manually via left thumb actuated buttons, or automatically in ESP mode. I prefer manual because it’s a blast rowing through the gears, and the Rincon is the only ATV in this class capable of doing so.

Four-wheel drive actuation is effortless, although no front differential lock is present; this will likely not matter if you’re not a rock crawler or deep mud fanatic.

The suspension felt fantastic and still delivers one of the most sporty and balanced rides of any big-bore machine. The suspension dampening was certainly not the most plush, but it felt smooth and predictable on both low and high speed adventures. With Honda’s design focus centered on manufacturing a smaller chassis possessing lower weight, the Rincon felt very sporty and begged to be ridden hard on tight trails.

The lack of Electric Power Steering (EPS) is my only complaint about this machine’s handling. Back in ’05, when I rode the Rincon for the first time, EPS hadn’t made its way into the industry yet. The handling on the 2013 model is still impressive, but I feel the addition of EPS should now become a priority for Honda to spark new life into this model.

The brakes are powerful and predictable. Twin hydraulic discs slow each front wheel, while a single hydraulic rear brake is mounted on the rear driveshaft. The rear brake can be actuated via either a left handlebar mounted handle or a right foot operated pedal. The stock aluminum wheels are some of the strongest and lightest wheels available. Stock Dunlop tires are lightweight, general purpose rubber that worked well for me in all but the muddiest conditions.

Ergonomically, the 2013 Rincon just felt right for my size and riding style. The controls were all easily accessible and the riding position is very comfortable. The chassis is narrow, due in part to the engine being mounted longitudinally. What this means is a more comfortable seating position with less fatigue on long rides.

Racks are manufactured with steel round bar and this design permits cargo to be strapped down safely and efficiently. If you want to pull a trailer with the Rincon, unfortunately you’ll have to purchase an aftermarket hitch. I feel this is also an area that Honda should address.

The Rincon also has limited storage space, with the only option being a front fender mounted cavity that is too small and not particularly water resistant.

Final Thoughts:
The 2013 Rincon is not the most powerful, most feature laden, least expensive, or most advanced ATV currently available on the market. There are certainly other machines that match one or more of those categories much better than the flagship Honda. What the Rincon still accomplishes, however, is something more important than declaring victory on any of the characteristics I mentioned.

The 2013 Honda Rincon is one of the lightest big-bore machines on the market, it has one of the smallest chassis that allows riders to negotiate extra-tight trails with less fatigue, and it has legendary reliability that will give owners years of trouble-free service throughout its life, all while retaining an impressive resale value. The model could surely benefit from some much needed upgrades like EPS, a front differential lock, a trailer hitch, and increased performance. I believe those changes will arrive one day, probably sooner than later. Despite a design that seems to be frozen in time, the 2013 Honda Rincon is still a phenomenally capable ATV.

2013 Honda Rincon 680 at a Glance
HITS
– Highly reliable and retains its resale value well
– No transmission belts to get wet means the Rincon is great for wet riding conditions
– Handling is quick, sharp and predictable
– The Rincon feels light and small, making it fun to ride
– Selectable transmission allows shifting to be done manually or automatically
– Separate front and rear brake controls