Andre the Giant Has a Trike

Andre Rene Roussimoff aka Andre the Giant is one of my childhood heroes. He stood 7 feet 4 inches tall... 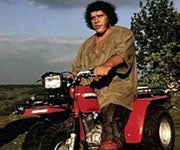 Andre Rene Roussimoff aka Andre the Giant is one of my childhood heroes. He stood 7 feet 4 inches tall and was loved by millions.

We all know Andre the Giant Has a Posse, but how many of you know he had a trike?

Andre had acromegaly, a long-term condition where there is too much growth hormone in the body. He suffered terrible back pains from this, and had to ride around the set of The Princess Bride on a ’85 Honda Big Red ATC. He is best remembered for his role as the lovable giant “Fezzik” in this movie.

Andre made his acting debut in 1975 as “Big Foot” in “The Six Million Dollar Man.” He went on to appear in television shows including “B.J. and the Bear,” “The Fall Guy,” and “The Greatest American Hero,” and movies such as Conan the Destroyer, Micki and Maude, and Trading Mom. Read more on his career at Andre the Giant’s official website.