Is This the Gun Wild Bill was Carrying When He was Murdered in 1876?

The Smith & Wesson Mo.2 supposedly on Wild Bill Hickok when he was murdered in Deadwood. Photo courtesy Bonham’s Auctioneers.... 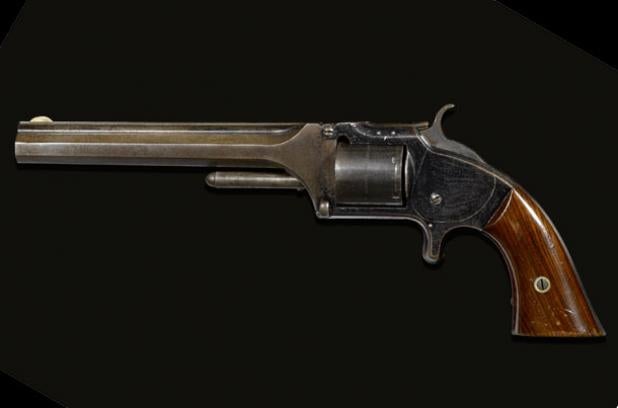 The Smith & Wesson Mo.2 supposedly on Wild Bill Hickok when he was murdered in Deadwood. Photo courtesy Bonham’s Auctioneers.

On Nov. 18 Bonhams Auctioneers will sell a Smith & Wesson Model No.2 pistol Wild Bill Hickok may have been carrying on Aug. 2, 1876, when he was murdered at a poker table in Deadwood, SD. Bonhams expects bidding to reach between $300,000 and $500,000 before the final gavel.

The Model No.2 pistol (serial #29963) going to auction is currently owned by Eric Hoppe, a radio equipment supplier in Chicago, Ill., and his family. Hoppe spent 15 years compiling names, timelines and sources supporting the claim that his family’s gun not only belonged to Hickok, but was on him when Jack McCall shot him dead.

According to Hoppe, the gun was likely seized along with other personal effects before Hickok’s burial. Later, when Captain Emil Willoth (who either owned or worked for a Deadwood store where Hickok ran up a tab) approached then Sheriff Seth Bullock about Wild Bill’s outstanding store debt, Bullock offered up Hickok’s Smith & Wesson No.2 pistol as payment. Captain Willoth passed the gun to his son Emil Willoth Jr. and his wife, Hazel (Fishel) Willoth, who in turn passed it to their daughter JoAnn.

The affidavit signed by Leona Arder, Eric Hoppe’s mom, attesting to the story as to how their family came to posses Wild Bill’s supposed pistol. Photo courtesy of Eric Hoppe.

JoAnn Willoth moved to Chicago in the 1940s and befriended a coworker named Leo Zymetzke — Hoppe’s grandfather. Willoth frequented Zymetzke’s house for dinner, and one evening in 1972, presented him with the No.2 revolver. Hoppe’s mother, Leona Arder, was present when Willoth gave the pistol to Zymetzke, and signed an affidavit stating Willoth did so because she was an only child, never married and had no other family to bequest possession of the gun.

Leo Zymetzke with the supposed Hickok pistol framed behind him. Photo courtesy of Eric Hoppe.

“My father lined the back of a picture frame with red velvet, placed the gun inside and hung it up in our living room for about a year. A gun collector that lived down the street heard about it and asked to look at it. When he saw it, he offered my dad $10,000 on the spot,” Hoppe says. “When my folks said no, he said, ‘if you’re not going to sell it to me, I advise you to keep it in a safer place.’ Shortly thereafter, my parents put it in a safe-deposit box, and that’s where it has stayed until now. My father passed away in 2009, but my mom, myself and my three brothers collectively own the gun, so we’ll split the money five ways.”

Hoppe has several documents supporting the pistol’s pedigree, including affidavits and book excerpts. As early as 1938, Ed McGivern’s book “Fast and Fancy Revolver Shooting” states the Willoth family in Deadwood possessed one of Wild Bill’s Smith & Wesson Model No.2 pistols: “The Willoth gun is quite generally established as being one of Wild Bill’s guns, and all reports seem to support such claim quite convincingly.”

“When you’re looking at outlaw guns, you have to look at them with some skepticism, like a civil court case–there usually isn’t a lot of indisputable evident backing up the provenance,” says Jim Supica, Director of the NRA’s National Firearms Museum. “One important consideration is when the chain of evidence starts and who documented it. In this case, we’re dealing with notations as early as the 1930s, which really helps strengthen Hoppe’s story–more than say, facts that came to light in 2005.”

Supica says the problem with many Old West artifacts, especially outlaw guns, is that undisputable evidence accompanies so few. Even if documents linking Wild Bill to his pistols existed, Deadwood burned to the ground in 1879, three years after Hickok’s murder, and any archived evidence would have likely turned to ash.

“A gun with iron-tight documentation is an “A” gun in my book. A gun with a history that’s probable but not absolute is a “B” gun,” Supica says. “There are so few gunfighter and outlaw guns that are “A” guns. They’re just extremely rare. Without iron-clad proof, you have to look at the provenance behind a gun, consider the strength of that evidence, and ask yourself if it’s all believable.”

To Supica’s point, none of Wild Bill’s supposed guns, even his famous iron-gripped Colts, are accompanied by indisputable proof that Wild Bill owned or carried them.

“We’ve never come across a document that links Bill Hickok with the serial number on any gun. The one gun that has the strongest connection with Hickok is the rifle removed from his casket in 1879 when they relocated his grave–but even then, there’s nothing saying Hickok owned or carried it. We just know it was in the casket with him,” Deadwood’s Historic Preservation Officer Kevin Kuchenbecker says.

This is not the first time someone claimed to own Hickok’s Model No.2 pistol. In 1961, a woman from Canada said her Model No.2 (serial #30619) belonged to Wild Bill. Some collectors and historians accepted her story at face value, but without significant evidence to back the claim, many have since discounted the piece, and the gun’s whereabouts are now a mystery. Bonhams Auctioneers gun specialist Paul Carella says the provenance behind Hoppe’s gun is different, and leaves little room for doubt.

A factory letter from Smith & Wesson was able to confirm the serial number on Eric Hoppe’s gun, but shed little light on who may have owned the gun. Photo courtesy of Eric Hoppe.

“The documentation for Hoppe’s gun is really some of the best support I’ve ever seen for a firearm this famous, and the players were all reputable, known figures. This isn’t like the gun was passed around between people with questionable backgrounds,” Carella says. “With guns like this, there will always be skeptics. We once auctioned Bob Dalton’s revolver with documentation from the sheriff’s probate auction. It was quite clear what the piece was and where it came from, and there were still some saying ‘Ya know, that might not be an actual document.’ All we can do is present the facts and let people make up their own minds.”

Supica agrees, but offers another plausible explanation — one that considers Hickok’s gunfighter past and the seemingly similar claims from both Model No.2 owners. It could be possible both guns are authentic.

“It’s possible, if not probable, that Hickok owned more than one Smith & Wesson Model No.2 gun,” Supica says. “I think the fact that the serial numbers 30619 and 29963 are relatively close only helps strengthen the case for both guns — that they could have been acquired at the same time and be Hickok’s property. There’s no documentation stating how many guns Wild Bill owned. For all we know, he could have possessed several Smith & Wesson No.2 pistols. Is this the one he was carrying when McCall murdered him in 1876? The only person that could tell you is Wild Bill himself.

“To purchase a gun like this, you really have to ask yourself, ‘how air-tight is the story behind this gun?’ Remember, you’re not buying the gun–you’re buying the story and documentation behind it,” he says.