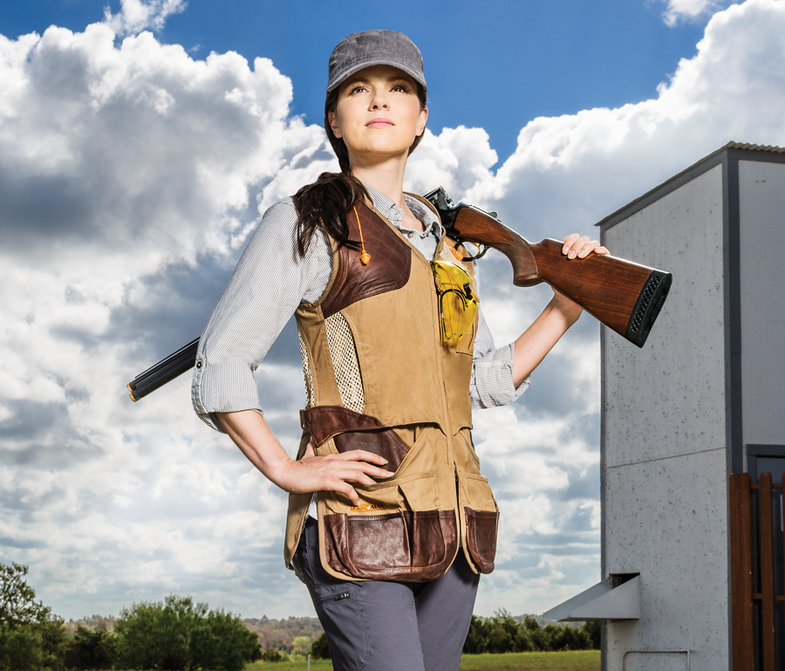 After years of wearing downsized men’s gear, female hunters and shooters have more options than ever when it comes to outdoor apparel tailored specifically for them. Why isn’t shrinking and pinking enough? Better fit means better performance; when women borrow from the boys, extra fabric or the wrong cut can get in the way of mounting a gun quickly and correctly. Our panel of four experienced female shooters wore these mesh-backed shooting vests on the range—and beyond—to test for fit and utility and to see which held their gear, held up to hard use, and brought out the best in their shooting.

The Lowdown: This vest got high marks for its classic looks, quality materials, and thoughtful features. Fisher called it “a thoroughbred of a vest,” after both target shooting and dove hunting. “I was unrestricted as I raised my gun, moved from seated to standing position, and bent over to pick up spent shells or dead birds,” she said. Green agreed, noting that long slits in the hip area allowed for range of motion and Velcro tabs at the waist improved fit.

Green and Fisher were enthusiastic about the eight pockets, but Fisher pointed out that the left shoulder has no pocket to accept the included air-mesh recoil pad, making the vest for righties only. Hinger found that things got pushed out of the rear pocket when she crouched down.

Tudor called the vest “a great all-around model.” Hinger agreed: “I’d even layer it over hunting clothes beyond upland season—it’d be great for holding elk or turkey calls.”

Th Lowdown: Tudor gave the Beretta vest her highest score, citing its fit, durability, and the breathability of the mesh back. Green, who appreciated its solid construction and quality materials, said, “The seams are strong, the zipper didn’t creep up, and the shell pockets are reinforced with rivets. I love the suede shoulder patch.” Hinger, however, was disappointed with some of the hardware. “The snap on one waist tab broke into two pieces the first time I put the vest on. It did come with extras that were not too difficult to install.”

The adjustable waist and stretch in the shoulder “provided a custom fit for a reasonable price,” said Fisher. Tudor thought that the fit was the most flattering but at the expense of some utility: “The pockets are smaller than on other vests, and there is no rear pocket for spent shells.” Green noted that there was a loop to attach a separate hull bag, but she would have preferred a pocket.

The Lowdown: The Browning sports the most mesh and won points for breathability and value. “This is a passable warm-season, clay-shooting vest, especially for the novice shooter on a budget,” said Fisher, who called the pink accents a “predictable ‘just for her’ look.” Green praised the interior pocket—”big enough for my cash and cellphone”—and the easy-to-reach rear hull pocket. But she deducted points for the double zipper: “I’d be halfway through a round of skeet and find that the bottom zipper had crept all the way up.” Fisher liked the button-tab waist adjustment and flattering fit. “The vest didn’t bunch at all when I raised my gun.” For Tudor, the fit was “too boxy,” even after adjusting the waist.

Hinger called it “a good, versatile vest for the money that will hold up for a couple of years.” She was disappointed, however, that the compatible Browning Reactar recoil pad is an expensive add-on.

Hits: “The best model for really hot days.” —Green
Misses: “Did the job, but without much style.” —Tudor

The Lowdown: Everyone praised this vest’s quality construction, but testers were split on its functionality. Hinger felt the option to detach the shooting apron was a great attribute, and when worn together, “the belted waist, not my shoulders, carried the load, which is good.” She also loved the zipper at the bottom of the back pocket, which let her easily dump its contents. But others couldn’t see using either half alone. “The problem with wearing just the belted portion is that I already have a shell bag I like better,” said Green. Tudor would have been happy to wear the apron alone, “but the top needs more pockets for added value.”

Fisher thought the top was bulky and “made it difficult to achieve a consistent gun mount.” Overall, the vest’s price was the biggest obstacle for testers, even Hinger, who liked this model best: “It performed well, but I don’t know if I would spend that kind of money on it.”

Hits: “Looks modern and technical.” —Tudor
Misses: “That price tag stops me in my tracks.” —Fisher