Shotguns: How to Make a 100-Yard Shot 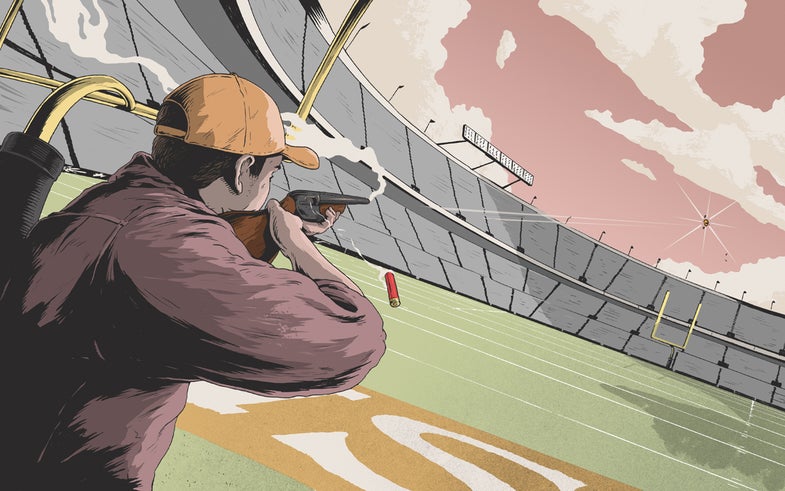 A regular full-choke shotgun packing your typical game load can break a belly-on clay bird even if it’s so far away it looks like a speck arcing across the vast blue Texas sky. If I could learn to hit targets at 100 yards, I could teach you to hit more birds at 35. That was my story, anyway, and I stuck to it as I backed farther and farther away from the tallest tower at the 74 Ranch near San Antonio, where I’d met OSP School instructor Gil Ash for an Advanced Sporting Clays clinic. When I finally pulled the trigger from a football field away, I had a long time to wonder if the shot would connect as I waited for the pellets to reach the target.

Four of the five shooters in my group broke the 100-yard clay more than once, and what I learned about hitting targets at twice the distance I would ever attempt at a live bird will help you knock down crossers at any range. Here are four key takeaways.

1. Get the Lead
While most of us learn to hit crossing shots by swinging through the target, it’s much easier to hit longer crossers by inserting the muzzle in front of the bird from the beginning and keeping it there. This makes the target seem to fly slower, as you don’t have to rush to catch it from behind—which, in turn, helps you keep your composure and make the shot in a more controlled manner. Starting in front works as well with 30- to 35-yard crossing shots as it does with the extremely long ones we took. In fact, I use this method, instead of the bird hunter’s swing-through technique, on crossers at almost any range in the field, save for the very close birds that take me by surprise, such as teal sneaking into the decoys.

2. Stay Ahead
As the bird comes toward the muzzle, match its speed with the gun. Then “run with it”—as Ash puts it—for an instant before pulling the trigger. In the field, I had developed the habit of speeding up my ­follow-​through on crossers. You can get away with that at close range, but because an increase in muzzle speed has a greater effect at longer ranges, even a slight acceleration can put your shot pattern feet ahead of the target. “Same speed at the end,” Ash intoned over my shoulder throughout the first day of the clinic until I finally got it.

3. Focus Front
Leading up to the clinic, Ash had assigned me the “three-bullet drill” as homework. I set three shotgun shells 8 to 10 inches apart on a shelf. Standing across the room with an unloaded gun in the low-ready position, I locked my eye on the center shell and then mounted the gun on the right or left target. I did this for about five minutes a day. Why? Because Ash kept sending me nagging e-mails and phone messages to do my homework. But also, as he told me later at the clinic, because “you have to accept the gun in your sight picture.”

The three-bullet drill (yes, I know that they’re not actually bullets) teaches you to get comfortable looking in one place and pointing the gun in another. This is necessary because if you look down the barrel while taking your lead, you’re no longer focusing on the target. The key is to see the barrel in your peripheral vision while keeping your eye locked on the bird. With left-to-right crossers (for right-handers), you see the target just to the left of the barrel. For right-to-left crossers, you have to look across the barrel to see the bird on the right.

When I shot 40- to 60-yard crossers at the clinic, I didn’t think How far out front should I hold? I only thought, See it across the barrel on left-to-rights (I’m left-handed) or See it to the right of the barrel for right-to-lefts. As long as I kept my eye on the target, not the barrel, my hands would find the right lead by themselves, kind of like relaxing the reins and giving a horse its head.

4. Drill Down
Ash’s fellow instructor Steve Brown led my group when we tried the 100-yard bird. Throughout that day, Brown stressed hard focus on the target. Most people, he said, can only maintain hard focus on a moving object for half to three-quarters of a second. If you drill down your focus too soon, your eyes come off the target at the wrong time. Instead, he told us to watch the bird, and then to narrow our focus to a specific part of it just before the shot.

We didn’t look merely at the front edge of the 100-yard clay; we looked at it like a clockface and picked an hour. I tried a 9 o’clock focus on a right-to-left bird, then 8 o’clock, as it seemed to be falling, but neither with any success. Then I focused hard at 10 o’clock, and the bird came apart in a starburst. Next shot, same focal point, same result, and before I could do it again, I was engulfed in a bear hug from Brown. I can’t tell you exactly how much lead I gave that bird, except that it was a lot, but I can tell you exactly where I looked at it.

Back home, 30- and 40-yard crossers were suddenly chip shots—and that’s the real value of taking shots you would never try in the field. Once you’ve swung a gun a UPS-truck-length ahead of a target and seen it break, leading a duck or goose a few feet seems like a gimme.