Behold, the perfect rifle for your pickup—and it’s even better than it looks 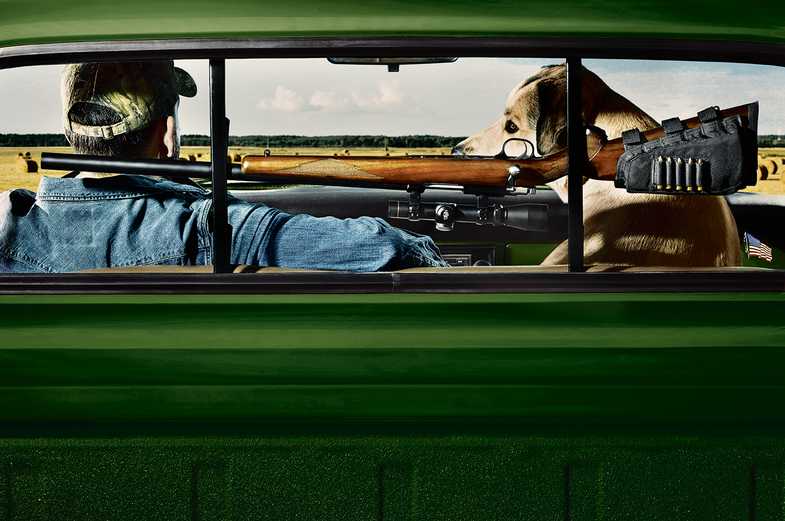 One of the few things we love more than our trucks in this great country is our guns. So if you’ve got the one, it’s borderline un-American not to have the other hanging in the back window. Plus, if you spend any amount of time riding around on hunting property or a ranch, it won’t be long before you come across something that needs shooting.

For some people, a good truck gun is just the cheapest, handiest one you can get your hands on—maybe a used H&R single-shot that gets stashed in the truck box or behind the seat until a coon or coyote scurries across the two-track. Real cowboys like a short lever-action .30/30 that can trade from truck to scabbard and put down an injured mount if called for. An AR will get folks’ attention, but that’s more of a liability than a plus when you have to replace it and your busted back window.

To me, a dedicated truck gun must be compact and quick-handling first and foremost, and have a proven track record for putting up with life off the pavement. It should also be quiet and capable of taking small game and varmints at long range, as well as bigger critters close-up in a pinch. And yet, it should not be overly tempting to thieves. With all of these criteria in mind, I have assembled the ultimate truck gun (which is hanging in the gun rack of the truck pictured above). It may look a little tame on the surface, but that’s by design—and it’s packing a few surprises.

Ruger’s M77/22 has several key advantages over other truck guns. It’s a bolt action, so it’s inherently accurate and jam-free. Short and compact, the M77/22 is faster out of the truck than a fireman. And it’s easy to reload thanks to a six-round detachable rotary magazine that’s flush with the bottom of the gun, so it won’t snag on the upholstery or catch the steering wheel when it’s put into action, and it won’t teeter-totter when rested over the hood, either.

Maybe the greatest attribute of this walnut-stocked workhorse is that it doesn’t throw a lot of flash from a rear-window rack. Even the dumbest thieves aren’t apt to risk jail for what appears to be a beater rifle that they could pick up at any pawnshop.

The Round Winchester Super-X Jacketed soft point
$39 for 50; ­winchester​.com

The centerfire .22 Hornet cartridge sends a 35-grain pill at 3100 fps, making it a great coyote, ­rabid-skunk, or any-­vermin-that-needs-killing gun out to 300 yards. It was introduced in 1930, and its minimal recoil, long-range lethality, and ability to be reloaded made it popular with yesteryear’s ranchers; it deserves a revival today. With only 750 foot-pounds of energy at the muzzle, the Hornet is not a cartridge for deer or big game. Using heavier bullets like Winchester’s Super-X 45-grain jacketed soft points, however, the Hornet can put down pigs at close range, and in fact there are few animals in the world that can’t be put down swiftly via a shot behind the ear if absolutely necessary.

Sitting pretty atop the rig is a Leu­pold HOG 1–4x20mm scope that won’t break the bank nor break down over miles of potholes and cattle guards. Although this model is marketed for hunting hogs, it’s ideal for general-purpose work in a variety of lighting conditions, and it’s well matched with the .22 Hornet’s capabilities. The scope’s Pig Plex reticle features a circled crosshair and vertical hashes for precise holdovers and wind drifts. Keep it at 4X for medium- and long-range shots; turn it to 1X for aggressive hogs and snakes that slither too close. The 20mm objective lens is compact, yet plenty bright. Most important, this optic gives you Leupold’s unwavering quality for under $300.

Now here’s the real secret to my tack-driving truck gun. The heavy-contoured, 22-inch tube looks like a bull barrel from Ruger’s factory. But it’s actually a combination barrel and silencer. Made and installed by SRT Arms of Arizona, the baffled barrel sleeve reduces the Hornet’s crack to a buzz. That means it won’t scare those big bucks you’re conditioning to stay on your property, it won’t cause any livestock to crash through a fence, and it won’t alarm the new neighbors from Chicago. With it you can roll out of the truck, smoke a coyote, and never think twice about first calling time-out to grab your hearing protection. You won’t need it.

This cheek pad from Blackhawk raises the stock’s comb for a perfect, accuracy-enhancing cheek weld when using a scope. Plus, shell loops and a zippered pouch keep ammo at your fingertips and a spare magazine handy without having to root around in your console. (I’ve seen your console.)

Finally, though it has nothing to do with a cheek pad, it’s worth noting that while a $10 window rack is classic and makes for a better magazine photo, I recommend a Big Sky BSR overhead rack (not shown; $70; ­bigsky​racks.com), which will suspend your ultimate truck gun out of sight of would-be thieves. You may appear borderline un-­American to some, but you and I will know the truth.