Can you get a handy, reliable new AR without spending a small fortune? We put 1,000 rounds through four budget-friendly lightweight rifles to find out. 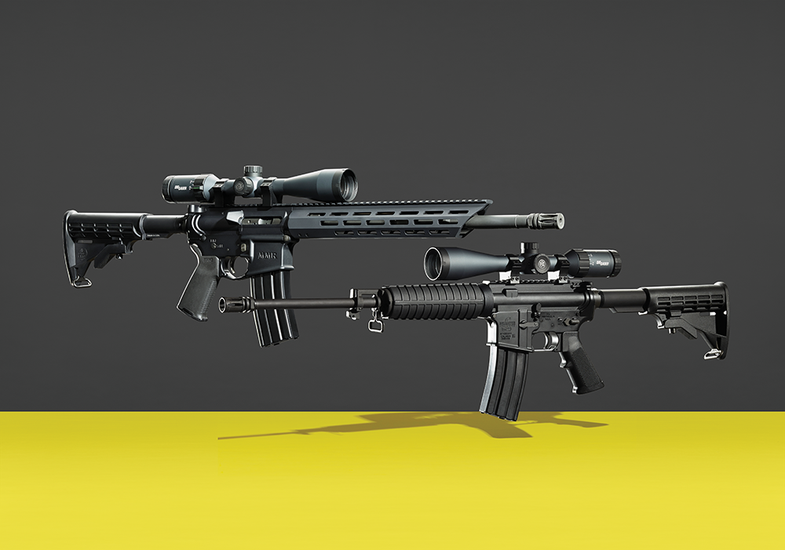 One of the major trends in AR-15s over the past year or so is that the rifles keep getting lighter and handier, which is great news if you want to hunt with one. We know that with today’s bullets, the .223 Remington has enough punch to take down deer, and it may be the best varmint-and-predator cartridge of all. (There’s a misconception that the .223 is not legal for deer hunting in most states, but it’s actually allowed in 35 of 50.) But for many would-be buyers, one key question remains: Can you get a handy, reliable new AR without spending a small fortune? To find out, I put a total of 1,000 rounds through four rifles, all of which weigh in at less than 7 pounds and cost under $1K. Here’s how they did.

[1] Best of the Test: Mossberg MMR

TRIGGER 7.3 lb., with .85-lb. variance
AVERAGE GROUPS Varmint load: .71″ • Big-game load: 1.62″ • Plinking load: 1.04″ • Overall: 1.12″
THE LOWDOWN A comfortable and accessory-ready hand guard and quick-detachable front and rear backup sights set this rifle apart. It was also the most accurate, producing an overall average group size of 1.12 inches. With the Black Hills varmint load alone, it averaged .71 inch. The MMR lost points for being the second heaviest of the group and for its weighty and creepy trigger. None of this was enough to overshadow the fact that it was the most ergonomic, adaptable, and accurate rifle of the bunch.

TRIGGER 6.45 lb., with 1.3-lb. variance
AVERAGE GROUPS Varmint load: 1.65″ • Big-game load: 1.58″ • Plinking load: 1.16″ • Overall: 1.46″
THE LOWDOWN At less than 6 pounds, the QRC was the lightest rifle tested, but it also had the most inconsistent and all-around bad trigger. Although it has no provision for open sights, the Bushmaster is the only gun here that includes an optical sight—a compact red-dot. It did not distinguish itself on the bench, taking last in accuracy. Still, the overall average group size of 1.46 inches is respectable and fine for many hunting applications. Given its minimal heft, price, and included red-dot, the QRC is the best bargain.

TRIGGER 5.43 lb., with .75-pound variance
AVERAGE GROUPS Varmint load: .56″ • Big-game load: 1.66″ • Plinking load: 1.23″ • Overall: 1.15″
THE LOWDOWN The M&P Sport II was the second-lightest rifle here at just over 6 pounds. It nearly tied for most accurate, and it had the best trigger by far. It lost points for an archaic military grip and a hand guard that does not accept accessories. But the biggest problem—at least for a hunting AR—is its A2 post front sight, which interferes with the sight picture through riflescopes of less than 6X magnification. Removing the sight housing is possible, but difficult. So as is, I had to dock points.

TRIGGER 7.63 lb., with .75-lb. variance
AVERAGE GROUPS Varmint loads: 1.23″ • Big-game loads: 1.45″ • Plinking loads: 1.29″ • Overall: 1.32″
THE LOWDOWN Ruger’s newest AR-556 is a compliant version, configured for jurisdictions limiting certain features. As a result, it lacks an adjustable buttstock and an accessory-compatible handguard, which cost it points. (A 2015 noncompliant version is still offered at the same price.) As with the S&W, the biggest problem is the fixed front sight. The trigger was the heaviest tested but was reasonably crisp. Overall this is a well-made, good-shooting rifle that may be just what you need where you live.

Complete Scoring Results: Each of the five test categories above was worth up to 20 points, for a maximum total score of 100.

Using a Sig Sauer Whiskey5 2–10x42mm riflescope, I fired 250 rounds through each rifle and scored them in the following five 20-point categories:

1. Accuracy
→ I shot and averaged groups from the bench at 100 yards using Black Hills’ 50-grain V-Max varmint loads, Barnes’s 62-grain Triple-Shock big-game loads, and Hornady’s 55-grain American Gunner plinking loads.
2. Size and weight
→** The lighter and more compact, the higher the score. Because catalog specifications can be optimistic, I weighed and measured all the guns myself.
**3. Ergonomics
→ I evaluated each rifle for fit and handling while shooting from field positions. I also considered extra features here.
4. ****Trigger
→** I tested each for weight, quality, and consistency.
**5. ****Reliability****
****→** **I docked points for jams, misfires, and any other hiccups.

1. Triggers
→ Timney offers AR triggers you can install in 15 minutes. At $229, they aren’t cheap, which is why you don’t find them in affordable ARs.

2. Hand Guards
→ If yours won’t accept accessories, you can replace it with a Magpul MOE that does for just $30.

3. Stocks
→ For anywhere from $30 to $100, you can swap a minimalistic mil-spec buttstock with an adjustable and more comfortable version from Magpul or Fab Defense.