The Latest in Lever-Action Deer Guns 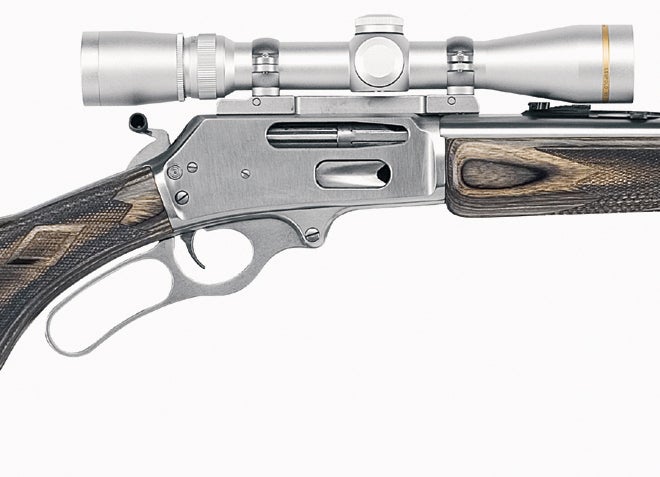 The All-­American deer gun is back. Thanks to recent advances in polymer-tipped, spire-point bullets that are safe to use in tubular magazines, lever-action rifles––once generally considered to be short-range, big-woods specialists–are now as capable as many short-action bolt rifles. Even the top-selling deer round of all time, the venerable if traditionally lackluster .30/30, is now a potent deerslayer capable of accurate shots out to 300 yards in today’s lever guns. The result is renewed interest in these traditional rifles from hunters–and a surge of new options from rifle manufacturers. Here are four of the latest levers you’ll see in gun shops this fall–and unlike some of the older versions, all four of the models here feature receivers that are drilled and tapped for modern optics.

Mossberg Model 464: The Specs: 20″ barrel; 6.7 lb.; .30/30 The Skinny: Mossberg’s latest lever action has the look and easy-carrying balance of Winchester’s legendary Model 94. This modern lever, however, has an ejection port designed so spent cartridges clear a receiver-mounted scope. The action is a pleasure to operate, and like Mossberg shotguns, the rifle has a top-tang safety that you can operate without having to move your trigger finger. Its rubber butt pad and hardwood stock are simple but serviceable. Overall, it’s a light, easy-to-shoulder gun that won’t empty your wallet. The Model 464 is now available with a straight stock or a pistol grip. $497-$535; 800-363-3555; mossberg.com

Browning BLR Lightweight Pistol Grip Stainless: The Specs: 20″ (standard) or 22″ (magnum) barrel; 61⁄2 or 63⁄4 lb.; .243 Win., .308 Win., .270 WSM, or .300 WSM The Skinny: Because the BLR is fed from a clip and not a tubular magazine, it can be chambered for a variety of short-action cartridges, including magnums with pointed bullets. As such, it has long been the most powerful lever on the market. The aluminum receiver keeps weight down; the steel-to-steel lockup of the rotary bolt to the barrel extension provides the strength of a bolt rifle. New for 2009, the Pistol Grip Stainless model features a weather-resistant, satin-nickel finish that looks great. Like all BLRs, this one is nicely balanced, and the action is smooth if a touch slower than traditional levers. $979-$1,099; 801-876-2711; ­browning.com

Henry .30/30: The Specs: 20″ barrel; 8.3 lb.; .30/30 The Skinny: The company that introduced the lever action in 1860 has finally added a .30/30 model for deer hunters. Available in either a blued receiver with round-bull barrel or a solid-brass receiver with octagonal barrel, the new rifle has a handsome, straight-grip American walnut stock. A Marbles adjustable buckhorn rear sight and brass-bead front sight add to the gun’s classic good looks. Both versions are heavy for a .30/30, but like all Henry levers, the action is silky smooth, and the gun is backed by a lifetime warranty, with a customer-service policy that is second to none. $750 blued; $970 brass; 201-858-4400; henryrepeating.com

Marlin 338MXLR: The Specs: 24″ barrel; 7 lb.; .338 Marlin Express The Skinny: This is a souped-up Model 336 chambered for the new .338 Marlin Express, a rimmed, short-action cartridge with long-range trajectory and terminal energy similar to the .30/06. It has all-stainless-steel metalwork, a laminated hardwood stock, a fluted bolt, an extra-long barrel for increased velocity, and a Pachmayr Decelerator recoil pad. The model I handled was heavier than listed and felt a little bulky but seemed rock solid. It can handle any deer hunting situation–from the deep woods to open prairie–and should build on the 336’s reputation for reliability. $805; 203-239-5621; marlinfirearms.com