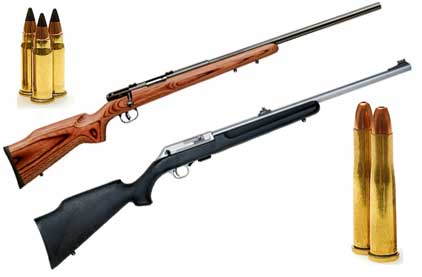 This month, although the snow is on the ground, we must devote our thoughts to our little furry friends who will emerge in spring, and to two new varmint rifles that will make their furtive existences even chancier than they are now. On the fuzzy side I speak of the woodchuck and the prairie dog; on the wood and steel side, the Savage Model 40 and the Thompson/Center R-55. The former is a design based on rifles made in more genteel shooting times, whereas the other is ultramodern. They are both unusual and highly useful guns that will cause varmint hunters to rejoice. (The varmints are entitled to feel fairly gloomy about the situation.)

THE RETRO SINGLE-SHOT
The Savage Model 40 is the spiritual descendant of the Savage Model 340. That horrendously ugly, cheap-looking, affordable, and accurate gun was made in both varmint and whitetail calibers, and it was the first centerfire rifle I ever bought. The Model 40, however, looks neither ugly nor cheap, and it’s close to half the price of a conventional varmint rifle.

It employs a medium-heavy, target-crowned, 24-inch sleeved barrel. The stock is laminated, and the trigger is Savage’s wonderful AccuTrigger, which on my rifle was set at a flawless 2.2 pounds. The Model 40’s lines are pleasing, and fit and finish are excellent. It’s not a light rifle; mine, minus scope, weighs 8Â¿Â¿ pounds.

Although the .22 Hornet-the only chambering for the single-shot Model 40-is a centerfire cartridge, the rifle employs a modified rimfire action. It’s perfectly safe for factory .22 Hornet ammo, which operates at 43,000 CUP (copper units of pressure), but it is not safe for handloads that are hotter than standard, or for the souped-up .22 Hornet wildcat known as the K-Hornet.

The .22 Hornet was developed in the 1920s by a group of experimenters that included Col. Townsend Whelen. Winchester introduced it in factory ammo in 1930. It’s pretty tame by modern standards, a 45-grain bullet at around 2700 fps at the muzzle. But at the time it was electrifying and hugely popular. My experience with it is long but thin. I shot rats with a Hornet in the mid-1950s, and in the 1980s I owned a very fine custom-made Hornet built on a Ruger Number One action. The Hornet is not a quarter-minute-of-angle, grass-scorching 400-yard round. It is a minute-of-angle, 150-yard round that has almost no recoil and a very mild report, making it pleasant to shoot. In these hyper times, those are considerable virtues.

With my Model 40, I got consistent five-shot 1 Â¿Â¿-inch groups at 100 yards using Remington ammo, and 1 inch with Winchester (Savage tells me that other Model 40s have shot sub-MOA). This may not sound like much in an era when factory varmint rifles shoot Â¿Â¿-inch groups or better, but think about it this way: At 100 yards, it will take all but the most emaciated prairie dogs, and at 150, it will nail woodchucks as well. There was a time when people actually hunted groundhogs to get within range. Try it. It’s a pleasant change from sniping them from a quarter mile away.

The Model 40 will not be everyone’s cup of tea. Today’s trend is faster and hotter and farther, and many shooters will be unhappy with the limitations imposed by the little Hornet. So it was a very gutsy thing for Savage to take such a big step backward. On the other hand, intelligent and discerning shooters are going to discover that you don’t need all that power and noise to have a fine day of varminting. At a suggested retail price of $436, you don’t need a heck of a lot of money, either.

THE ULTRAMODERN AUTO
In 2001, Thompson/Center Arms introduced a .22 auto rifle that was so wonderful it won an F&S; Best of the Best Award. The T/C Classic .22 LR was brilliantly designed and flawlessly made, a little marvel of quality in every respect. Its lineal descendant, the R-55, is chambered for tthe .17 Mach 2 rimfire cartridge and exhibits the same high standards as its parent.

Unlike the Classic, the R-55 has very racy lines: an extremely high comb, a deeply cut-out pistol grip, and a general Buck Rogers silhouette. The 20-inch barrel is medium-heavy, target-crowned, and screwed, not pinned, into the receiver. As a rule, the triggers on factory .22 auto rifles are nothing to get excited about, but this one is the exception-clean, and only 3.3 pounds. The iron sights are good enough to put most centerfire rifle sights to shame. They are precision adjustable and equipped with fiber-optic outline points in red and green. (You’ll probably have to remove the rear sight in order to get a scope on the rifle.)

Hornady’s .17 Mach 2 cartridge was introduced in 2004, based on the .22 Long Rifle case. It fires a 17-grain polymer-tipped bullet at 2100 fps from a 24-inch barrel. According to some of the early reports I’ve read, this is a red-hot 150-yard cartridge. But a couple of days of prairie-dog hunting last spring made me think otherwise. (As either Mark Twain or Benjamin Disraeli said, “There are lies, damned lies, and ballistics.”) At 150 yards, these tiny bullets seem to lose most of their punch and the wind plays with them pretty badly. I think the .17 Mach is a fine 100-yard cartridge, and I tested it for accuracy at a conservative 50 yards, where I got .95-inch five-shot groups.

There are two versions of the R-55: In blue steel with a laminated stock, it costs $479; a stainless-steel, composite-stock model is $546. Weaver-style scope bases and rings are $51 extra. There are very few rifles around, either rim- or centerfire, that are as well thought out and nicely made as the R-55. In these sorry times, it’s heartening to see a gun that is this good.