The late William Batterman Ruger was a genius. Again and again, amidst croaking and muttering that this time he’d lose... 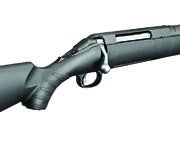 The late William Batterman Ruger was a genius. Again and again, amidst croaking and muttering that this time he’d lose his shirt, he resurrected guns of the late 19th and early 20th centuries, modernized the designs, then made a fortune on each new iteration. Once, he went back 2,500 years for inspiration and reinvented the lost art of investment casting, which was used to make jewelry for the pharaohs of Egypt.

So it would be fair to surmise that he might not care for the Ruger American Rifle, which is thoroughly 21st century and owes nothing to anything found in the past. Bill Ruger was very fond of good rifles, however, and the RAR, as we will call it, is a good rifle. And then some.

Clever Curve
When you design a firearm, you usually start with the magazine, and here, Ruger engineers did something clever. The RAR’s magazine is detachable, which is not unusual, but it’s also rotary, which is highly unusual in a centerfire rifle. The bottom of the shallow four-round box is curved, rather than flat. This allowed Ruger (the engineers, not Bill) to design a slim, molded stock that follows the profile of the magazine. As a result, the stock’s bottom is curved, too, rather than the customary flat. The stock also comes with a good recoil pad.

Embedded in the stock, lurking beneath the front receiver ring, is Ruger’s Power Bedding system. This consists of four opposing angled aluminum bedding blocks that fit into corresponding grooves in the receiver. When you tighten the bedding screws, they pull the receiver straight down and wedge it into place, all of which contributes to the rifle’s extraordinary accuracy.

Unlike Ruger’s Model 77 bolt-action rifle, which is essentially a Mauser, the RAR has a receiver that is mostly enclosed, making it much stiffer, and a three-lug bolt with a short 70-degree lift. There is no rotating Mauser extractor; it’s been replaced by a sliding extractor on one of the lugs and a plunger-style ejector. The new action works extremely well and is very fast in operation.

Of course, a new action needs a new trigger, and this one is called the Ruger Marksman Adjustable Trigger. It adjusts between 3 and 5 pounds via a nice big screw on the trigger housing. My rifle’s trigger scaled 41⁄2 pounds with some creep, but the adjustment screw got that down to 31⁄2 (no further), and as I shot the rifle more, the creep vanished. A great trigger it ain’t, but it’s a huge improvement over the Model 77 trigger.

The safety is on the tang, and it falls right under your thumb. There are no iron sights; the rifle comes with Weaver-style bases.

Right now, the RAR comes in .243, .308, .270, and .30/06. The barrels for all four calibers are 22 inches long, the best length for non-magnum calibers, rather than the more common 24 inches that many manufacturers use across their lines to save money. Someone at Ruger deserves a medal for this decision, as it helps ensure accuracy.

Sure Sign
My test rifle–a production-​line .30/06–did not like most of the factory ammo I fed it. The notable exceptions were Remington 180-grain Core-Lokts, which shot into 11⁄4-inch groups; and Federal match ammo, which went into a 1⁄2-inch group. The rifle would place two shots next to each other and then send the third way off on the horizon–the signature of a rifle that’s very accurate but not quite digesting what you’re feeding it.

The RAR is light, tough, slick-handling, accurate, and affordable (it lists for $449, but I’ve seen it advertised on the Internet for $100 less). If you can think of something else that should go into a hunting rifle, let me know, because I can’t.