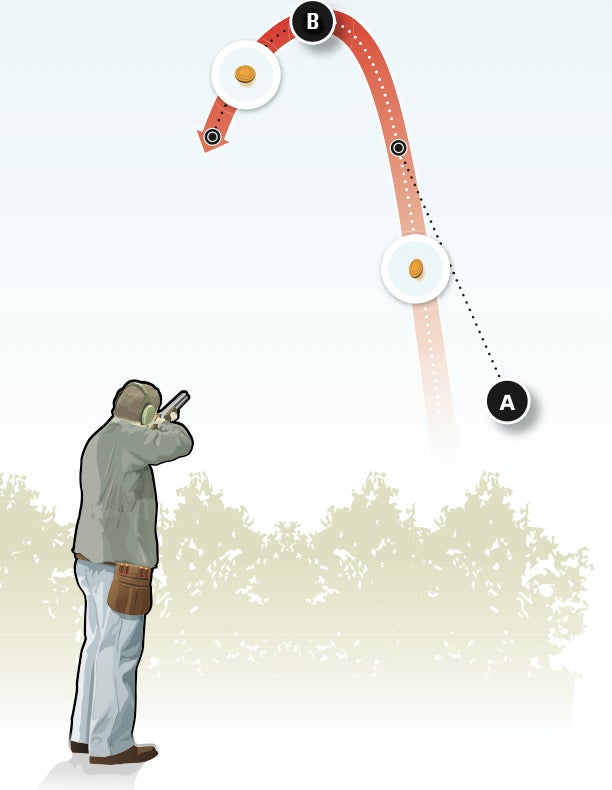 MOST PEOPLE MISS teal for the same reason, says Mike Mohr, director of sporting clays at Seven Springs Mountain Resort (7springs.com). The problem arises when shooters “pull through” the target. Instead of pulling the trigger the moment the barrel passes over the clay bird, “they stop the gun for a split second” when they no longer see it. Here’s how Mohr suggests avoiding the mistake:

On the Rise Start in a ready stance with your gun pointed to the right of the box. Once you see the bird, mount your gun and raise the barrel so it’s moving alongside the flight path [A]. This way, you’ll never lose sight of the teal. Focusing on the top edge of the target, “insert” (position) the muzzle just over the top. Pull the trigger with the gun still in upward motion. The key is to move the gun slow and steady.

On the Drop Falling is the one instance in which a clay target will actually increase speed. To shoot the second bird (or, ahem, if you missed), first let the bird roll over the top of your barrel near the top of its arc [B]. Then, train your muzzle to the bottom edge of the clay, ride it for a second as it drops, and pull away, accelerating the gun below the target. Pull the trigger once you see daylight.