Here's how you can make a gong ring from more than half a mile-away. 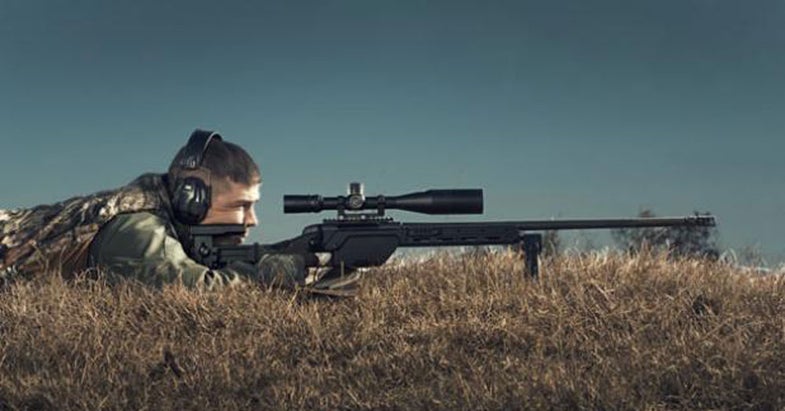 Snipers practice at 1,000 yards because the farther away from which you can shoot someone who’s shooting back, the better. Serious competitors go long for tangible proof of their skill on the loading bench and on the firing line. I shoot at a grand because it’s fun and impresses my friends. “See that steel target over there? No, not that hillside, the next hillside over. Yeah, that tiny target. Well, I’m going to hit it from here.”

Practicing regularly at 1,000 yards also makes me a much better marksman at 300 or 400 yards on game. And there’s something intriguing, really cool, about sending a bullet out over the length of 10—count them, 10—football fields and actually hitting your target.

A good friend of mine, who’d never shot beyond 500 yards, recently snuggled up to one of my long-range fun guns with a box of match ammo at his elbow. After eight shots to get things perfectly dialed in, he had first-round hits on 30-inch gongs from 500 to 900 yards. He not only hit a 15-inch circle at 1,000 yards; he fired a 7-inch three-shot group, to boot.

And that, in a nutshell, describes long-range shooting today—easy if you get a little help out of the gate. New, affordable, and more accessible equipment and loads of knowledge flying around the Internet and in the heads of a growing number of long-range shooters has turned a shot that was once the exclusive domain of military snipers and serious competitors into something attainable for the average shooter. Here’s what you need to get started, and how to make the 1,000-yard shot.

Just how accurate your long-range rifle needs to be depends on how precise you want to get. At worst, a 1,000-yard gun should shoot a minute of angle, which equates to 1-inch groups at 100 yards. In theory, that rifle would produce 10-inch groups at 1,000 yards. Benchrest competitors would throw any rifle that only squeaked by this accuracy standard off the first available bridge, but if you just want to hit a big gong at a grand, it’ll do.

While there are plenty of AR-10 shooters and the odd AR-15 guy going long, the majority of shooters who hit the 1,000-yard range rely on bolt-action rifles whose stronger actions better handle the cartridges with enough horsepower to go the distance and buck the wind. The variations are nearly endless, but long-distance bolt guns have a handful of consistent features, including:

A long, heavy barrel. Longer doesn’t necessarily mean more accurate, but it does help turn powder into increased bullet velocity. A heavy barrel is more rigid and resists heat-induced changes better than a sporter-weight barrel. And a tube that doesn’t overheat is important, because if you shoot at a 1,000-yard target once, you’ll want to shoot it again and again.

A stock with multiple adjustments. It’s just easier to consistently snuggle up to a stock that fits. A comb adjusted to the perfect height quickly puts your eye in the scope’s center. A near vertical pistol grip helps reduce accuracy-killing torque from your trigger hand. And having the perfect length of pull helps dampen recoil. The fore-end should have a good anchor point for a bipod, unless you’re shooting off of bags or a fancy rest. Then the fore-end needs to be wide and square for maximum surface area.

Heavy overall weight. This helps reduce recoil and your propensity for screwing up the shot with wiggles and wobbles.

Most other details boil down to how far and fast you want to shoot and how much money you want to spend. Throwing money at the 1,000-yard problem actually does produce results because better components produce more consistent shots, and consistency is what really counts. That said, I have a handful of rifles that cost under $1,500 that will go toe-to-toe with models costing five times that much.

Many people think 1,000-yard shooting is the exclusive domain of the behemoth .50 BMG. Actually, there’s a whole slew of suitable cartridges that both kick and cost much less. The critical factor is maintaining supersonic bullet velocities past a grand, because when bullets cross the subsonic threshold, accuracy really suffers. And that puts a lot of rounds in the running: The vanilla .308, for example, does just fine loaded with 175-grain or heavier bullets. My favorite cartridge du jour, the .338 Lapua Magnum, is faster and resists wind much better but costs $4 to $5 per shot. The short-action 6.5s, like the 6.5 Creedmoor and .260 Remington, will blow your mind with their downrange performance. The old-school .300 Win. Mag. and 6.5×284 Norma are proven performers. It really comes down to how much you are willing to pay in terms of cost per shot, barrel life, and recoil to make the long shot happen.

Most serious long-range shooters reload their own ammo. Twenty years ago, they did this because match-grade ammo with premium bullets was hard to come by from the factory. That’s no longer the case. Today, only the most dedicated reloader can better the performance of the best commercially loaded ammo, but all that preloaded brass, lead, and copper goodness will cost you. So we still reload, but now mostly to save money.

You can’t hit what you can’t see, so your scope is a critical piece of equipment. Good glass will cost you, and it is worth every penny. Magnification is your friend. I like a high end of 20X or 25X, even though mirage can be a problem. You’ll need target turrets and side parallax focus. The turrets allow for precise adjustments to account for wind and elevation, and the side focus puts the reticle and target on the same focal plane for better aiming. Don’t skimp on the mounts, since holding the scope on the rifle is a pretty important job; really good ones include those made by Badger Ordnance, Seekins, and LaRue.

The Accessories
Old-school shooters will gnash their teeth and rend their clothes at the thought of relying on gadgets, but the right accessories make a huge difference. My most indispensable tools are an Oehler 35P chronograph, a Kestrel 3500NV weather center, and an iPod Touch (or a smartphone) with several ballistics programs. The chronograph tells you your exact bullet velocity, which is important because you can’t rely on manufacturer’s charts for this. The weather center gives you all the atmospherics—elevation, temperature, relative humidity, wind speed and direction. The ballistics program digests all this information and makes the 1,000-yard shot almost as easy as turning a few dials—almost.

The Shot
So now you’re at the range. You’ve got your new long-range rifle and scope, all your fancy gadgets. How exactly do you hit that far, faraway gong? Easy breezy.

First, zero your rig in at 100 or 200 yards (either will work with your ballistics program) and use the chronograph on five or 10 shots to get an average velocity. Take that data, the bullet’s ballistic coefficient, and the data from the weather center and enter it into a ballistics program like Knight’s Armament BulletFlight or Horus Vision’s ATrag. Press enter, and there you have it: precise corrections for elevation and wind.

Adjust your scope as recommended and take a couple of shots at 500 yards. If you’re dead-on, go to 600 or 700. If you’re off a little, adjust the scope as needed until you’re on, and work your way in this manner all the way out to 1,000. Just do yourself a favor and write down any adjustments you make to the ballistics program’s original specifications. That way, the next time you want to shoot in the same conditions with the same round, you won’t have to keep fiddling around to get on target. Just look at your notes, dial it in, and fire. In most cases, this approach will get me on a 30-inch, 1,000-yard gong on the first shot.

To be honest, 1,000 yards isn’t what it used to be. With new developments in software, ammunition, rifles, and optics, today’s professional shooters have stretched the definition of way, way out there. I know military snipers who routinely, monotonously hit man-size targets at 1,600 yards and beyond. But for those who have never lined up on a 1,000-yard target, squeezed the trigger, and recovered from the recoil in time to see and hear the thwack of a bullet on steel at 1,000 yards, you’re in for quite a rush.

How Far is Too Far?
At the range, too far is moot. As long as the shot is safe, there are no consequences to missing. But that changes when you’re shooting at a living, breathing animal. My long-range shooting has made me a better shot on game but it has also pointed out my limitations. I understand, for example, that misjudging the wind just a little could push a bullet out of the kill zone and into an animal’s paunch. People ask how far I would shoot a deer, and the answer is “It depends.” My equipment, my rest, my ability to gather conditions data, and the animal’s position are just a few factors. There are days I feel comfortable shooting out to 500 or 600 yards, and others when 100 yards would be stretching it.