Photo by Vic Schendel Ever since there was a Kaiser-Frazer dealer around the corner or down the street (Google this... 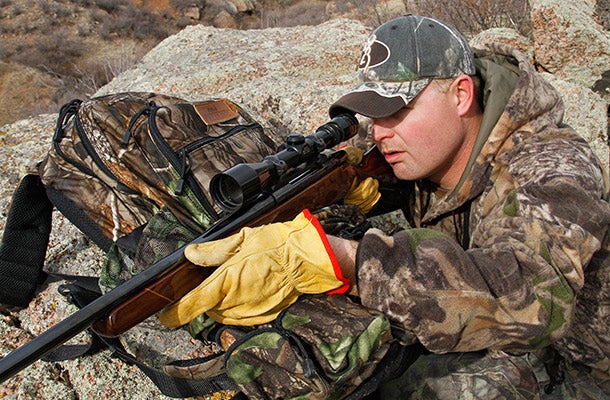 Ever since there was a Kaiser-Frazer dealer around the corner or down the street (Google this to see the time frame), the long-range limit for hunters has been 300 yards. This is the maximum distance at which a competent marksman can reliably hit a big-game-size critter with a more or less ordinary rifle. However, there is now equipment–lots of it–that enables you to hit well beyond 300 yards. And so if you’re wondering if 400 yards is the new 300, I can answer “Yes, with qualifications.”

But first, let’s put this in perspective. I asked a range officer who gets to see the general public shoot what percentage can hit a deer-size target reliably at 300 yards, never mind 400. He smiled, and held up his thumb and middle finger joined to form a zero. You might want to think about that.

Double Trouble
When you add a football field to the predictable world of 300 yards, everything goes to hell; beyond that point, velocity decreases dramatically, and your bullet drops like a stone. Wind, which is a problem at 300 yards, becomes a nightmare at 400. Let’s look at some dismal figures.

To make things worse, very few people can estimate range accurately past 300 yards, and beyond that point even small errors become critical because your bullet is dropping so fast. If you don’t have an accurate rifle, lack the wits to select an aerodynamic bullet, or can’t shoot very well to begin with, you’re sunk before you start.

Essential Ingredient
On the other hand, if you want to be a 400-yard shooter, you have a lot going for you. There are economy-priced rifles that shoot better than minute of angle, bullets that are aerodynamic marvels, laser rangefinders that take all the guesswork out of figuring yardage, and scopes and binoculars with all sorts of range-compensating aiming systems, many of which work. And there is no end of information on long-range shooting on the Internet.

All of this is a huge help. But the essential ingredient to shooting accurately at 400 yards is having a place where you can shoot at 400 yards. You’ll have to learn to dope the wind, insofar as that can be done, and the only way to do it is to shoot a lot, observe the conditions carefully, and keep good notes on what happens.

You also need to find out where your bullets actually go, as opposed to where all the ballistic calculators, drop tables, and range-compensating reticles say they will. In real life bullets go where they damn well please, not where computations say they should. I’ve been fooled badly, many times, going by the book.

Bison Ballistics puts the case with heartrending eloquence on its online calculator: “Do not rely on results generated by this software for any purpose whatsoever. It is a demonstration of ballistic theory, not a predictive tool for real-world use.” Amen.

Skill Set
I know a number of extremely skilled long-range riflemen, some of whom can shoot better at 600 yards than I can at 300. What they have in common is years of hard work–30 to 40 years or so each, shooting anywhere between 2,500 and 5,000 rounds of rifle ammo a year. How do I know? I asked. I bring this up lest you expend a whole box of ammo in practice and think you have done your homework.

So, is 400 yards the new 300? If you have the equipment, a place to practice, and the willingness to work at it, the answer is yes.