The History of the .338 Winchester Magnum 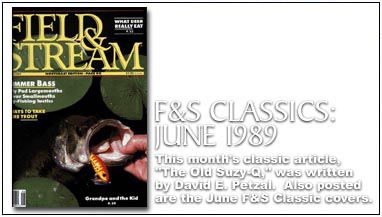 ROCKY MARCIANO was the only heavyweight champion to retire undefeated. He fought forty-nine men and licked them all, knocking out forty-three. He was not stylish or scientific. But the Rock had heart, and he threw about the hardest punch of anyone who has stepped into the squared circle. His trainer, Charlie Goldman, called it The Old Suzy-Q.

There is a cartridge that I have come to call The Old Suzy-Q, because what you shoot with it goes down and stays down. For pulverizing efficiency, it knows no betters and few equals. It is, friends and fellow fight fans, the .338 Winchester Magnum.

There is nothing new about .33-caliber cartridges. The .33 Winchester, a rimmed round, was introduced in 1902, predating the .338 by fifty-six years. The .333 Rimless Nitro Express was offered to the public by the British gunmaking firm of Jeffery in 1911, and became highly popular in Africa. Wildcatters in America had taken note of the .33-caliber bullet as far back as the 1940’s, and the most notable of these homemade cartridges was the .333 OKH, a .30/06 case necked up to take .333-diameter bullets.

The OKH in .333 OKH stood for the load’s designers, Charles O’Neil, Don Hopkins, and Elmer Keith. Keith adopted the cartridge as a form of religion since it perfectly embodied what he considered to be the proper characteristics of a big-game load–a long, heavy bullet traveling at moderate velocity.

In 1958, Winchester made Ol’ Elmer and a lot of other people happy by introducing the .338. It differed from its predecessors in two respects: first, it used .338-diameter bullets rather than .333. Second, it pushed the slugs at considerably higher velocity. The .33 OKH and the .333 Jeffery used bullets of 250 grain (there were other weights involved, but this was the basic one) at about 2500 fps. The .338, which was a .458 Winchester Magnum case necked down, held enough powder to move a 250-grain bullet at 2700 fps, which gave the slug just about the same trajectory as a 180-grain .30/06 bullet. Since the .338 case was the same length as a .30/06, it would work through any standard-length magnum action.

At the time it was introduced, the .338 was also offered with a 200-grain bullet at 3000 fps and a 300-grainer at 2450. Not too long ago after the cartridge made its debut, Winchester also introduced a rifle to go along with it, and called the New Model 70 the Alaskan, giving hunters a fair idea of what the round was intended for: to wit, big heavy, critters, or big, heavy, dangerous critters.

People used it on big, heavy, and dangerous critters, both here and in Africa, and they found that it would handle such beasts with dispatch. They also found that it would put down, in exemplary fashion much smaller, lighter game, and do it at amazing distances. When he used the 250-grain bullet, the .338 was the near equal of the much larger .375 H&H, and when stoked with 200-grain slugs, it would far outreach the .375.

There was one catch to all this–the .338 kicked. Conventional wisdom has it that a shooter of average skill can tolerate recoil of a gun in the .30/06 to 7mm magnum class, but if it’s more powerful than that, kick becomes a problem. The .338, in a conventional rifle, goes far beyond that level. Recoil varies with rifle and bullet weight, but on the average, a .30/06 will have about 15 foot-pounds of recoil, and a .338, 30 foot-pounds of recoil, which is enough to give most people pause. During the pause, they’re likely to trade the brute in for something smaller.

The .340 is a ferociously effective cartridge up close, and as a long-range slayer of large creatures, it has no peer. It does have some drawbacks, though. First, of course, is recoil. Second, it must have at least a 24-inch barrel in which to burn its heavy powder charges (the factory uses a 26-incher as standard), and third, it must utilize a full-length magnum action rather than the standard-length action that the .338 takes.

There is one other thing I’ve noticed about the .340. I’ve owned five rifles in this caliber, and while they all would shoot 250-grain bullets with excellent accuracy, the best I could ever get with 200-grainers was 2 to 3 inches. This, of course, is fine for hunting, but if you crave dime-sized groups, you will not be happy.

Although the .340 has its share of fanatic followers, I have come to prefer the .338. It will do 90 percent of what the bigger round will do, kick less, and can be chambered in a smaller, lighter gun, which is important as I grow older and heavier. In fact, the .338 can achieve just about maximum velocity with a 22-inch barrel, the only one of the belted magnums that can, as far as I’ve seen.

My experience with the .338 is what a statistician would call skewed. I’ve owned a number of rifles in this caliber, and shot lots of different bullets through them, but almost all of my actual hunting has been with the 250-grain Nosler, and a little bit with the 210-grain Nosler.

I’ve hunted with the .338 a fair amount in the U.S., and done a lot of hunting with it in Africa, and I have a pretty fair idea of its capabilities. (However, as with any discussion of cartridges, you must always insert the phrase “most of the time” into what I’m saying. When readers write and say things like “Didn’t you know that lung-shot deer always go down in their tracks?” I assume the letter is from a person who has not hunted deer all that much. Anything can happen, friends, and it usually does.)

Because of the great advances in rifle technology, the .338 is a far more viable cartridge now than it was thirty years ago. Prior to the development of synthetic stocks and modern muzzle brakes, you had two choices if you wanted a .338: You could have a light (8 pound) rifle that was portable and would knock you out from underneath your hat, or you could have a 10-pound rifle that did not kick much but would induce tachycardia (which is radically speeded-up heart beat, and that’s $75; pay the receptionist, please) if you carried it more than 50 yards.

A good example of what is possible in light weight/low recoil is Duncan Barnes’ .338, which was put together by David Gentry. It utilizes a Remington 700 action, a Kevlar stock, and a 22-inch stainless-steel barrel by Mark Chandler. It is a light/medium weight barrel, and what really takes the sting out of the rifle is Dave Gentry’s recoil brake, which threads onto the muzzle and adds another 2 inches to the rifle.

Muzzle brakes are very simple. The modern ones all consist of a steel cylinder with ports bored through it that divert the powder gas to the side or the rear, or both. The brakes are astoundingly effective. Barnes’ rifle kicks like a standard-weight .270, which to say hardly at all. The draw back to the devices is the noise they create, since the muzzle blast is coming back at you instead of away from you.

Since I have lost a lot of my hearing, and am acutely sensitive to loud noises, I cannot tolerate muzzle brakes. (On the other hand, my left shoulder was declared legally dead on August 6, 1973, so recoil doesn’t bother me much.) However, muzzle brakes are very popular, and I am in a very small minority in that respect.

So what do you do with your .338? Why, bless me, you hunt anything you want with it–except small critters. I know at least one person who uses it as an antelope gun, because a 210-grain bullet at 3000 fps shoots very flat, and gets blown around comparatively little. However, I’ve found that on creatures of less than 200 pounds, such as antelope, small deer, impala, etc., the .338 destroys too much meat. A big, fast-moving bullet is highly destructive, which makes it effective on large animals, but wasteful on small ones. This applies to the 250-grain bullet as well as the 200 and the 210.

It is on bigger beasts that this cartridge really shines. It differs from lesser calibers such as the 7 mm and .300 magnums in that it seems to be more consistently effective in putting critters down right now, even the big, tough ones. I’ve found, both here and in Africa, that with smaller cartridges, you would shoot a critter perfectly and it would run off as though mildly annoyed and completely unhurt, and I’d find it piled up 50 yards away or half a mile away. This seems to happen most often with the .300 magnums; nine times out of ten you’ll shoot perfectly, but the creature will run for half a day.

Not with the .338. What I have aimed it at has gone down. The longest any animal has run after being hit with it was 100 yards, and that was a kudu that I shot too far back. A zebra, which I hit less than perfectly, ran 25 yards. Everything else never moved out of its tracks.

There is a catch to all of this. You must use a premium bullet. One of the characteristics of the .338 is the tremendous straight-line penetration it gives. The 250-grain slug will break any bone it hits in any sized beast, and keep right on going, but only if it’ a good bullet. In terms of brand names, this means the Nosler Partition, the Speer Grand Slam, the Hornady, the Trophy Bonded, and the Barnes slugs, all 250-grain bullets. With them, you can attempt shots that you cannot shoot from bad angles and still drive through several feet of muscle and bone to reacarnes’ rifle kicks like a standard-weight .270, which to say hardly at all. The draw back to the devices is the noise they create, since the muzzle blast is coming back at you instead of away from you.

Since I have lost a lot of my hearing, and am acutely sensitive to loud noises, I cannot tolerate muzzle brakes. (On the other hand, my left shoulder was declared legally dead on August 6, 1973, so recoil doesn’t bother me much.) However, muzzle brakes are very popular, and I am in a very small minority in that respect.