Build A Survival Fire With Condoms and Underwear

Keith McCafferty tests reader’s fire-starting and tinder tips—and tells you which are the best. 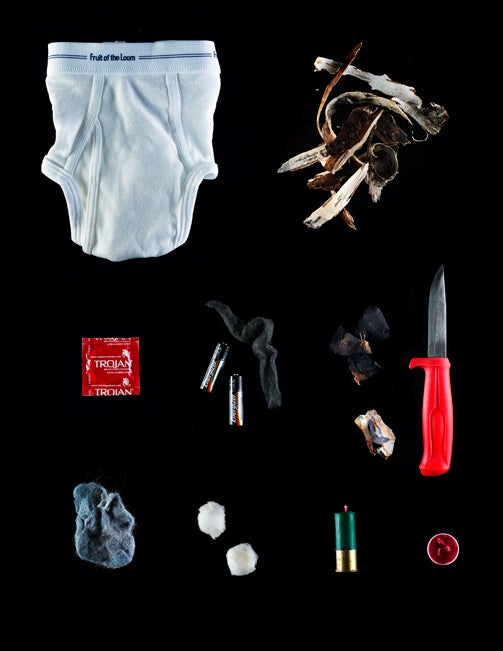 When my wife notices the small, square foil wrapper on my desk, she regards me with a coolly level gaze.

“I can explain,” I tell her. And I do, but she remains skeptical. After all, it’s not the kind of wrapper she’s used to seeing when I’m conducting research for this column. She becomes even more skeptical when I tell her I need it to start a fire.

After discovering the mess I’ve made of the kitchen—steel wool strewn on the floor, several unwrapped condoms, spent shotgun shells dripping wax onto the countertop—she admits that just possibly I’m telling the truth. But she banishes me to the backyard anyway, where a picnic table offers a more appropriate base of operations.

Each year, Field & Stream readers send us a truckload of fire-starting tips, ranging from the practical to the absurd. My editor has asked me to test a handful of the most promising, or at least the most interesting. The goal is to find the best tools in two categories: ignition and tinder.

The Spark: Ten minutes into the morning’s work and already I’m stumped. Following the reader’s instructions on how to start a fire with steel wool and a D battery produces heat, but no sparks. I decide to test the method using AA batteries, which a hunter is more likely to have handy in his GPS or headlamp. Holding two batteries end to end—with the base of one touching the terminal of the other—I press the steel wool to the extreme ends, which produces a fizz of sparks and glowing wire. The tricky part, I find, is placing a tinder nest on the wire, which glows for only a few seconds, and blowing it to a flame. Because the sparks are an indication that you are shorting out your batteries, you have to get it right quick. With numb fingers and core body temperature falling on a zero-degree night, my bet is you’d die trying.

A letter from a metallurgist spurs the next test. A few years ago, this man wrote to express his disgust with the magazine for printing an article I had written about starting fire with a knife and a flint, asserting that for steel to be hard enough to spark it would be too brittle to make a knife. I refute his argument in three flicks of the wrist. It’s true that you need a knife with a hard, non-stainless blade. But knocking around my basement are several knives, including Swedish Mora blades and some tarnished folding knives, that spark when struck against quartzite or flint. The knack is the flicking motion that scrapes steel against stone to produce the sparks, and catching the sparks on a piece of char cloth. Then you must transfer the glowing char cloth to a tinder bundle and blow it to flame.

By now the sun is high, which means it’s time to test the condom. The method, which the reader calls Forbidden Fire, involves filling the condom with water and using it as a lens to focus sunlight onto a pile of tinder. Unfortunately, this R-rated version of the old magnifying-glass fire falls into the wouldn’t-it-be-pretty-to-think-so category. I finally turn the trick after an hour of trying, having figured out that you have to fill the condom to the breaking point so that it makes a large, transparent sphere in order to concentrate the light into a small enough point. But even then you need strong overhead sun, bone-dry tinder, steady fingers, and time—none of which are likely in a survival situation (for video of this trick, click here).

Winner: Sparking fire with a knife and stone is far and away my favorite, but it’s really just a trick. To spark a fire, you’re better off going commercial. A steel striker (like the Brunton Striker Fire Starter; ­brunton.com) is easier to use and will produce a thicker shower of sparks.

The Flame: The first tinder experiment finds me holding a match to lint deposited by a dryer load of hunting wash, including a fleece jacket and Thermax underwear. The reader who submitted this tip has called lint the “perfect tinder,” but mine provides only anemic flame before subsiding into hot goo. Lint from a load of blue jeans flames up much higher. The secret is the fabric: Cotton lint makes excellent tinder, whereas lint from synthetics, like fleece, merely melts.

Next, I try out a couple of ­recipes for making candles. Pouring wax into a spent shotgun shell is the sexiest, but the simplest and most effective is the bottle-top candle. Pour candle wax into a plastic soda bottle cap and insert three wicks. The result will sustain a long-lasting flame.

Cotton balls smeared with petroleum jelly are another popular suggestion—and a good one. They are lightweight, compactible, and easily ignited. The jelly is fuel to a minute’s worth of tall flame that resists being blown out by the wind.

One reader suggests shredding up a bunch of cedar bark and rolling it into a ball. It flames all right, but a ball of shredded birch bark will burn even when wet and makes a better tinder.

I save the most bizarre tip, burning underwear, for last. Ducking under the lilacs for privacy, I shuck my drawers, strike a match under the crotch and behold—flames shoot 4 feet into the air. Holy Fruit of the Loom! Seriously, this is a great idea. Most hunters who have succumbed to hypothermia were found with matches in their pockets. They died because they couldn’t get tinder to stay lit. Many might have survived if they’d thought of burning their cotton y‑fronts, which flame like a blowtorch to start even damp firewood. The lesson? If you want to be safe, don’t worry about getting chafed.

Winner: The briefs are the hands- (or pants-) down winner.

The day has produced a couple of useful tips. The cotton balls will undoubtedly be in my hunting pack this fall. Beyond the specifics, what I’ve learned is there are a lot of ways to make a survival fire. Some methods are better than others. But the more resourceful you are with the gear you have at hand, and the more you practice making fires, “forbidden” and otherwise, the more likely you are to be rewarded with that candle of light and warmth to see you through a bitter night.