Gasping, rifles across our backs, we scrambled up the hill with our hands in the dirt. I looked up into... 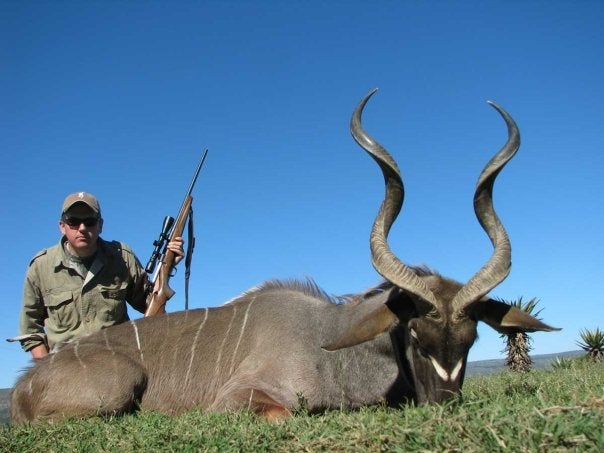 This is a kudu. Kudu don't grow as large on the East Cape as they do further north, in Namibia and elsewhere. But of all the animals included in this package, this kudu was the one I wanted most, and the hunt for it proved the most exciting of them all. You can read the full story here -- it was originally published in a special section of the magazine's November 2009 issue.
SHARE

Gasping, rifles across our backs, we scrambled up the hill with our hands in the dirt. I looked up into the sun to where the blood trail crossed the ridge and tried to blink the sting from my eyes. Sweat dripped down my forearms, leaving dark prints in the dust. We were moving fast. When you wound a kudu you must catch up to him quickly or he will vanish into the bush, and you will never see him again.

I was hunting in South Africa, on the East Cape, on a ten-day safari with ten animals to kill. I had tags for warthog, wildebeest, bushbok, gemsbok, impala, duiker, two species of springbok, and a blesbok. But the animal I wanted most was the last on the list; the kudu. Now I’d put a bullet in one’s chest, and I knew that if I didn’t move fast we would lose the animal in the steep terrain. I did not want this animal to suffer.

On the slope above me professional hunter Alan Shenck paused long enough to whisper. “Hurry up,” he said, “I think you’ve hit him low.” He pointed at some spatter on the rocks. Behind us our skinner, M’stele, held the leads restraining Shenck’s two Jack Russell terriers, Muzzy and Fletch. Their panting matched my own.

We had spotted the bull an hour earlier; it had been standing on a ridge across the ravine from the baboon shit-covered cliff on which we’d set up. We’d been glassing there since we’d climbed it in the dark that morning.

Glassing for kudu requires great focus. You must memorize the shapes and shadows of bushes. Anthills will fool you. Stumps will make your heart jump. Your brain will tire and you will lose patience, and then the animal will move and you will miss it. Missing movement is bad, because kudu do not move often. When they do you must be ready.

One way to maintain your concentration is to look for other wildlife, and when I saw this bull I’d been watching a shrike impale a grasshopper on an acacia thorn. The kudu was hidden behind the bush on which the bird had perched. He was browsing, pulling leaves from the branches, and I saw him when his mane caught the light.

He was standing with a group of cows. The sun was rising over our shoulders, lighting his side of the ravine and leaving ours in shadow. To reach the bull we’d need to work our way down the cliff, through the brush at the bottom, across a dry gully, then up the other side to a small clearing from which Alan thought we might get a shot.

Our first worry was that something would see us moving. There are many eyes on you in Africa. This includes baboons, which will bark like dogs when they startle. Then there are the ostriches, which peer at you like seven-foot turkeys over the brush. You do not hide easily from an ostrich, and if one sees you it will start running and spook every animal in the area.

And then there are the snakes.

When we reached the gully at the bottom of the valley we took off our shoes for silence. Alan told M’stele to stay behind with the dogs. We were using the ditch as cover, working our way towards a line of shrubs that ran up the ridge, which we were planning to crouch behind as we moved closer to the clearing.

The bottom was dry sand, covered in loose rock and strewn with bones and branches. Roots punched out of the banks to twist in the shadows, and the brush overhead nearly closed out the sky. We stepped softly, hunched at the waist, Alan in front and me behind. I focused on placing my feet in the same places he placed his, so when he stopped suddenly I nearly knocked him over.

Puff adders are the most dangerous snakes in Africa; they kill more people than any other serpent on the continent. Normally a PH will kill the ones he sees by hacking off their heads with his machete, or bashing in their skulls with a branch, but we were being quiet, and so we simply nudged this one with a stick from where it lay coiled in our path. It hissed, slithered into a tangle, then stopped there to glare at us. Alan looked at my feet, looked at the snake, then looked back at me and raised an eyebrow. I shrugged; we kept moving. As we climbed out of the gully I tried to forget that I was walking in my stockings.

We spent the rest of the stalk crawling on our bellies from bush to bush, closing to within shooting range. The bull was still there but he had moved into the open and we did not want him to spot us. It took half an hour to move into position. By the time I put a scope on him I had stickers in my elbows, thorns in my hips, scratches on my hands, and my feet were sore from stepping on sharp rocks. None of which mattered when I finally saw his horns.

Kudu bulls are magnificent animals, massive creatures with striped gray flanks, long necks, and full, regal beards. They move with an awkward elegance, like angels confined in the forms of goats. And their horns will make your hands shake.

He was about 200 yards away, a long shot for a boy from the shotgun woods of Upstate New York. But I was confident in my gun and had trained with it before leaving. I placed the crosshairs on his shoulder, let out my breath, and squeezed the trigger.

Through the scope I saw him buck. He kicked at his shoulder with a hind leg, dropped into a crouch, and then vanished. Cow kudu flushed from the bushes like quail. Alan clapped me on the back, his face bright, sweat gleaming in the stubble of his shaven head. “Good shot!” he said. “You got him. You hit him good.” He turned and whistled for M’stele, who arrived with our shoes and the dogs.

I was tying my laces when I caught movement with the corner of my eye. I looked up to see the bull slip from cover and go limping over the ridge. My heart sank. Alan swore. I grabbed my gun. M’stele grabbed the dogs and we set off after him.

When we reached the top the blood trail had all but disappeared. There were still specks of it to be found, but searching for them was slowing us down, so Alan loosed Muzzy and Fletch, who bolted off down the far slope toward the bottom of the next valley.

PHs like Jack Russells for three reasons. One is that the small dogs move quickly through thick brush. Another is that if they find your kudu dead they’re not big enough to do much damage to its cape. The last is that if a bull runs after you hit it, a terrier does not look frightening enough to make it run faster. A wounded kudu will turn and try to kill one that is snapping at its heels, which gives you time to catch up and finish the animal off.

The dogs reached the bull as he was cantering into a clearing about 300 yards below us, down in the bottom. When they burst from the bushes behind him he wheeled to face them, and I could see blood streaming down his foreleg from a hole low in his shoulder.

Fletch reached the bull first and began darting at his hooves, snarling and barking and dancing just out of reach whenever the kudu made a move. Muzzy, the younger dog, took one look at the scene and turned around, retreating up the hill to where he could watch from a safer distance.

If a peaceful kudu is magnificent, a furious one is terrifying. When one wants to kill something it rears up on its hind legs, tucks its chin to its chest, then slams its horns toward whatever is irritating it with the full weight of its body behind them.

“You’ve got to shoot him!” Alan looked down at the clearing. “Shoot him, quick. He’s right on the dog!”

It is easier to be accurate when you don’t have time to think; training takes over. I had practiced this shot. I sat back on my right heel, put my left elbow forward so that the meat of my tricep rested on the cap of my knee. Cheek down. Eyes open. Breathe out. Do not hesitate. I aimed at the top of his back and fired.

He bucked again and dove into the thicket before I could cycle the bolt for another shot. Fletch followed; Muzzy waited for us. When we reached the clearing we could see new blood in the grass and I knew that we would find him soon.

He had piled up deep in the thorns, the finger-long kind, as if to make even our last job difficult. We had to crawl to reach him. I did not know something so large could fit through brush so thick. He was still alive when we got there but had spent nearly everything and was almost gone. I braced his horns on my legs to hold down his head and Alan ended him by stabbing the small blade of a Swiss Army knife into the gap between his spine and the base of his skull.

We gutted him there. M’stele fetched a rope, and we spent five hours winching him out of the thicket. My first shot had hit him right where the heart would have been on a deer, which is too far back and too low on an African antelope. The second, higher, had quartered through his lungs and punched out the side of his neck.

By the time we reached the truck the stars were out. Jackals were howling and I could hear bush pigs squealing in the darkness. I looked up, covered in dust and blood and ticks, and the only constellation I could recognize was Orion. I looked down at my feet, at the beast I had killed, and thought that a kudu is not much like a whitetail.