Research from the University of Georgia provides insight on how a deer's scent-producing glands function. 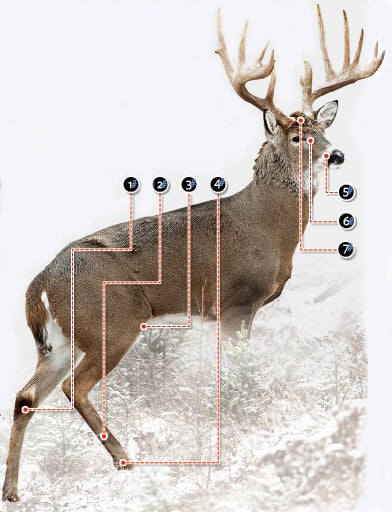 The odiferous qualities of whitetail deer come from no fewer than seven different glands scattered literally from head to toe. Researchers at the University of Georgia have tried to figure out which stink comes from what stinky gland, and what each might mean to a deer.

[1] Tarsal Gland This patch of hair and subcutaneous organs helps drive the hunting-scent industry. Bucks urinate on the glands more frequently during the rut, and the reaction between urine, gland secretions, and bacteria produces the telltale odor. Bucks establish dominance partly through these secretions, so use the scent to key in on the big boys. Location: Inside of the hind legs.
[2] Metatarsal Gland In mule deer, it produces an alarm scent, but nothing indicates the same for whitetails. Location: Outside of the hind legs.
[3] Preputial Gland Researchers aren’t sure, but it might play a role in a rutting buck’s identifiable scent. Location: Inside the buck’s penal sheath.
[4] Interdigital gland Forty-six volatile compounds are secreted by this gland, and the varying evaporation rates mean the smell changes over time. That might help a deer age a track with its snout. Location: Between the toes.
[5] Nasal Gland Not sure. Location: Inside the nostrils.
[6] Preorbital Gland Nobody really knows. It could play a role in marking rubs. Location: In front of the deer’s eyes.
[7] Forehead Gland Marks rubs and other vegetation with the scent of a dominant, mature buck. Location: Between the eyes and the antler bases.