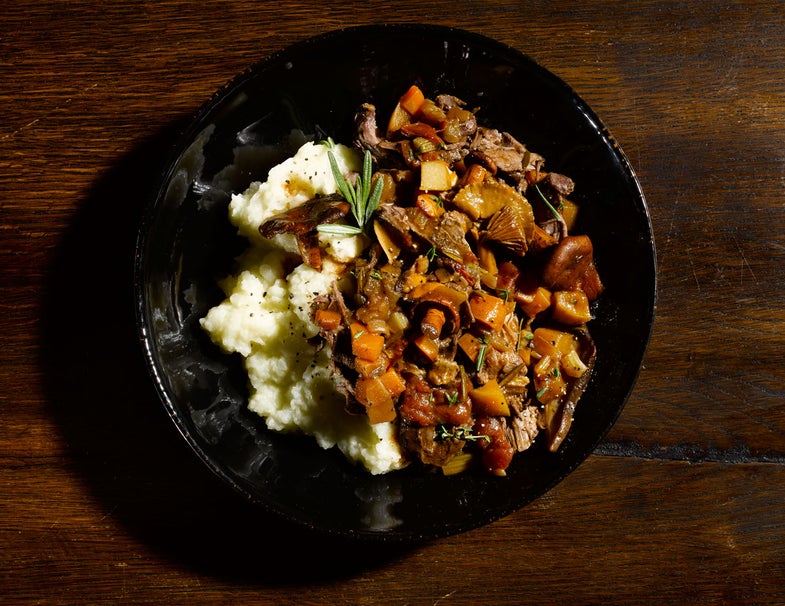 I grew up hunting and fishing for just about anything a young man in the South could ever hope for. In my family, cooking fish was always Mom’s job, but cooking game was often a man’s job. This is when and how I truly found my calling to be a chef. I actually prefer the tougher cuts of venison, like the shoulder, because they have more flavor, and I go out of my way to get them from my friends who only use the shoulder for sausage. Don’t get me wrong: I love venison sausage, but I’d much rather make that myself than do what so many of my peers do by sending it to some facility that mixes everyone’s game into one big batch. But that’s a different subject for a different story.

Editors’ Take: You’ll need the entire shoulder, and freezing it whole will protect it from freezer burn. The turnip puree is one of the best things we’ve tried all year. As for the venison, well, you may never use the shoulder for sausage again.

Venison:
1. Season venison shoulder with salt and pepper. Over high heat, add bacon drippings to pot, then brown venison on both sides.

2. Remove venison, then add onion, carrot, and celery. Reduce heat to medium and stir while cooking, until vegetables have become mahogany in color. Then stir in flour. When flour has been well incorporated, add garlic, tomato, apple, and dried mushroom.

4. Reduce heat to a low simmer, and cover pot. Cook for 2 hours, or until meat begins to pull from the bone with a fork. Taste sauce and season with salt and pepper as needed.

5. Remove from heat. Take out venison shoulder and carefully pull meat from the bone. Return meat to the cooking liquid until ready to serve.

Turnips:
1. Place turnips and potatoes in a pot and fill with enough water to cover vegetables. Cover with a lid and bring to a boil over high heat. Reduce heat to low and cook for 20 minutes, or until turnips become soft.

Serving Tip: Place a large spoonful of turnip puree on a plate. On top, serve a generous spoonful or two of the venison shoulder with sauce.

Chef John Besh is an award-winning chef/owner at several restaurants in New Orleans, including Restaurant August. Want to try more of his recipes? Then pick up his new book, My New Orleans ($45; Andrews McMeel Publishing), which has more than 200 of his best dishes.